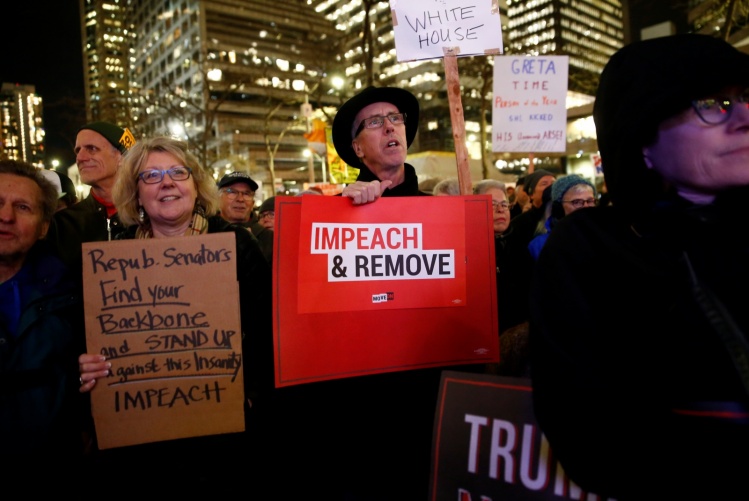 Protesters hold signs calling for the impeachment and removal of U.S. President Donald Trump during a rally outside the federal building in Seattle Dec. 17, 2019. (CNS photo/Lindsey Wasson, Reuters)

Three years into his presidency, Donald Trump will face trial in the U.S. Senate on two articles of impeachment approved by the House of Representatives. It is all but certain that the Republican-majority Senate will not vote to remove him from office. The rest of the country will get to decide his fate next November.

Nevertheless, it was right for Democrats in the House to proceed with impeachment, both how and when they did. The articles of impeachment are narrow in scope but nevertheless damning. The first charges Trump with abusing the power of the presidency. In secretly withholding nearly $400 million in military aid to Ukraine until it announced an investigation of Joseph Biden for nonexistent acts of “corruption,” the president “[ignored and injured] national security and other vital national interests to obtain an improper personal political benefit. He has also betrayed the nation by abusing his office to enlist a foreign power in corrupting democratic elections” (the House Judiciary Committee report alleges multiple federal crimes, including criminal bribery and wire fraud, under this charge). The second article charges Trump with obstructing Congress’s investigation into these abuses. In defying subpoenas for documents and blocking staff members from testifying about the Ukraine scheme, Trump engaged in “categorical and indiscriminate defiance” that prevented the House from conducting its oversight role and violated the separation of powers. These actions meet the definition of “high crimes” as the Constitution’s framers understood the term. Envisioning (or dreading) such behavior by the executive, the framers were clear that it could not be countenanced. They “provided for impeachment of the president because they wanted the president, unlike the king, to be controlled by law,” as legal scholar Noah Feldman told the Judiciary Committee earlier this month, “and because they feared that a president might abuse the power of his office to gain personal advantage, corrupt the electoral process, and keep himself in office.”

These are risks the Democrats have to take. They cannot just stand by as a president violates the Constitution in full view.
sharetweet

Trump’s supporters in Washington and on Fox News often cite the approaching election in inveighing against impeachment, arguing that the voters themselves, through a free and fair election, can get rid of Trump if they don’t like him. But there is nothing in the Constitution restricting impeachment to non-election years or to second terms. In any case, the framers made explicit that cases of executive corruption are to be settled by Congress, not at the ballot box. This is partly because such corruption can make elections themselves less “free and fair.” Had details of the Ukraine scheme not come to light, Trump might have succeeded in abusing his power to damage the reputation of a possible opponent in the November 2020 election. Even after that scheme was discovered, the president publicly invited China to investigate the Bidens, and continued to recommend that the Ukranian government undertake “a major investigation” into a Democratic presidential candidate. It was precisely the risk that Trump might corrupt the 2020 electoral process that made it necessary to expedite the impeachment inquiry. Any later might have been too late.

By now the nation is used to the unwillingness of Republicans to criticize Trump’s behavior. Yet as impeachment grew more likely, the Republicans not only defended that behavior but also imitated it—the stonewalling, the lying, the intimidation and belittling of respected government officials, the peddling of debunked conspiracy theories—often in a state of performative high dudgeon. Perhaps that is the only option when there’s no disputing the facts at hand. Senate Majority Leader Mitch McConnell has since declared the GOP’s intent to align itself completely with the White House’s impeachment defense strategy: “I’m going to take my cues from the president’s lawyers.” Sen. Lindsey Graham, trapped in a downward spiral of self-abasement, has bragged of not reading the impeachment report, called the inquiry “a sham” and “total B.S.,” and most recently declared that he’s “not trying to pretend to be a fair juror.” Truthfulness is an increasingly scarce commodity in the GOP, so credit both McConnell and Graham for openly admitting they intend to break the oath of impartiality they will take before the Senate trial begins.

There are of course political risks in impeaching the president. It subjects Democrats to charges that they’re seeking to overturn the results of the 2016 election, and it may jeopardize the reelection of some Democrats in Congress. It could even work to Trump’s political benefit and propel him to another term. It will do nothing to heal America’s political divide. But these are risks the Democrats have to take. They cannot just stand by as a president violates the Constitution in full view. Doing so would invite more such abuses in the future—not only by this president but also by his successors, Republican or Democrat. The impeachment of Donald Trump is no “sham.” In fact, it is a duty: a necessary expression of fidelity to the first principles of our Constitution.