Report from the Afterlife
By Charles McNamara
Poetry 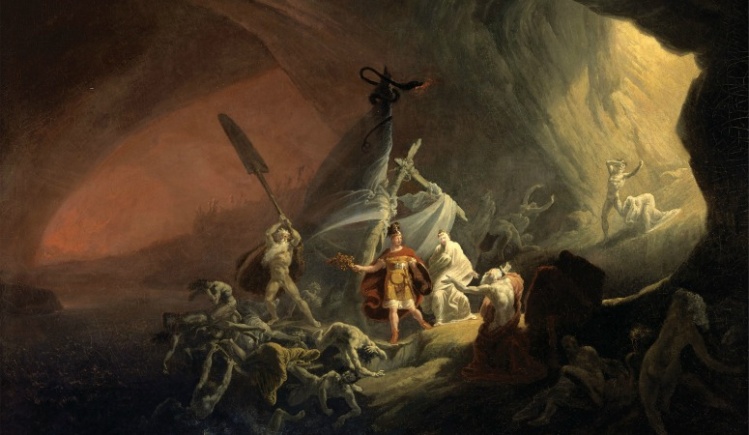 Written during the political ascent of the Emperor Augustus, Virgil’s Aeneid memorializes and mythologizes the foundation of Rome over the course of twelve books. Students of Latin often learn that the epic contains two halves: while the first “Odyssean” half traces the hero Aeneas’s flight from the ruins of Troy, his romance with Dido in Carthage, and his eventual arrival on the shores of Italy, the second “Iliadic” half narrates the glory, camaraderie, and bloody vengeance that culminate in the founding of the Eternal City. The Aeneid’s sixth book, then, stands at the middle of the poem but also serves as an intermediate closure. Having completed his Mediterranean seafaring, Aeneas is only now beginning his journey to establish the Roman state. But before that new journey begins, Aeneas descends into the underworld to visit his dead father Anchises.

Not long before his death three years ago, the poet Seamus Heaney was finishing a translation of the Aeneid’s sixth book, which fittingly narrates a visit to “a nowhere of deserted dwellings, / Dim phantasmal reaches where Pluto is king.” One can read Heaney’s translation not just as a fresh version of Virgil’s tale but also as a firsthand account of one who has passed to this “nowhere,” a travelogue that Heaney has sent from beyond the grave.

Recently published by Farrar, Straus and Giroux, Heaney’s translation includes a prefatory note announcing its purpose: not a “version” nor a “crib” but instead “more like classics homework,” a literary exercise to “honor the memory of my Latin teacher at St. Columb’s College, Father Michael McGlinchey.” In some passages, one sees vestiges of this “homework.” Heaney shows a botanical exactness in transplanting the holm oaks, ash trees, and spruces of Virgil’s Italian landscape into English poetry. And at times, his translation mimics Virgil’s Latin, rendering the verb spargens, for example, as “asperging.” These moments remind readers that translating Latin can often be an exercise in decoding, swapping ancient words for modern counterparts that can still feel a little foreign.

But Heaney never relies on the clunky formulas one expects from amateur Latinists—ablative absolutes translated as “with these things having been spoken” or gerundives as “the things needing to be done.” Heaney’s last poetry may be homework, but he’s a sharp student. Despite his prefatory remarks, in fact, Heaney’s translation often stretches the syntax of its Roman source or opts for thoroughly Anglo-Saxon diction. Meeting the shade of the helmsman Palinurus, for instance, Aeneas learns of his former comrade’s death. His corpse in the sea above, Palinurus reports, is left unburied, a condition that Virgil conveys in simple language: nunc me fluctus habet versantque in litore venti. Building upon this rather prosaic Latin—which one might literally translate as “Now the wave holds me, and the winds turn me on the seashore”—Heaney finds an opportunity to inject fresh English sonority: “Now surf keeps me dandled, / The shore winds loll me and roll me.”

After Aeneas and the Sibyl, his travel companion to the underworld, cross the Styx in Charon’s boat, they land “Soldier and soothsayer on slithery mud, knee-deep / In grey-green sedge.” There they find Cerberus, whom the Sibyl tranquilizes with a drugged morsel: “the ravenous triple maw / Yawns open, snaffles the sop it has been thrown.” Such lines, steeped with alliteration and assonance, show Heaney’s attention to his own language’s poetics, not just Virgil’s. In fact, several of these words—“snaffle,” “sop,” “slithery”—would have sounded foreign if not barbaric to Virgil. Heaney combines the epic’s Roman mythology and history with a deliberate arrangement of sounds that artfully depart from the poem’s Italic origins.

Still, Heaney’s skillful use of Anglo-Saxon sounds throughout his translation does not keep him from conveying some of the original beauty of Virgil’s Latin. At the narrative climax of Book VI, Aeneas finally greets the spirit of his father Anchises, who died during the journey from Troy to Italy. Borrowing rhetorical structure from the original Latin, in which two adjacent lines begin with ter (“three times”), Heaney tells of Aeneas’s failed attempts to embrace his father, capturing the craft of Virgil’s poignant reflection on the futility of trying to commune with the dead:

Three times he tried to reach arms round that neck.

Three times the form, reached for in vain, escaped

Like a breeze between his hands, a dream on wings.

The text of Heaney’s translation is likely incomplete: in an afterword, the publisher explains that the final 150 lines were still under revision. Any speculation about what words and rhythms might have changed in these last lines had Heaney lived to revise them is perhaps “in keeping with the Aeneid’s own halted composition” as well as scholarly efforts to imagine a more complete version of Virgil’s poem. The publisher has also included the beginnings of what Heaney “may have intended to serve as an afterword,” where he concedes that the sixth book has some questionable politics:

For the contemporary reader, it is the best of books and the worst of books. Best because of its mythopoeic visions, the twilit fetch of its language, the pathos of the many encounters it allows the living Aeneas with his familiar dead. Worst because of its imperial certitude, its celebration of Rome’s manifest destiny and the catalogue of Roman heroes...

The sixth book is one of retrospection if not regret, meditating on the finality of death and the “twilit fetch” of ancestors with whom reunion is not possible for the living. But this final Odyssean chapter also looks ahead with a particular optimism, one that has something to do with what Heaney calls “imperial certitude”: the language of prophecy describing what Virgil and his contemporaries already saw before them—the rise of “Augustus Caesar, child of the divine one” and the Romans’ “overwhelming / Desire for fame.”

Against this uncritical nationalism, however, the Aeneid also exhibits an optimism about death, at least for those who have lived virtuous lives. True, the Aeneid’s underworld imposes torments upon those who “for a lifetime / Hated a brother, abused a parent, or ruined / The good name of a client; those who gloated / On wealth they’d secretly amassed and hoarded / And failed to share with kith and kin.” But not all the dead in Virgil’s epic suffer. Aeneas also finds those for whom death is respite and reward:

Here was a band of those who suffered wounds

Fighting for their country; those who lived the pure life

Of the priest; those who were dedicated poets

And made songs fit for Apollo; others still

Whose discoveries improved our arts or ease, and those

Remembered for a life spent serving others.

No doubt Heaney noticed that Virgil gives a prized place in the afterlife not only to poets but also to priests and those who served others—double insurance for his dedicatee, Father McGlinchey. Heaney’s translation here feels like a wish or a promise of the “happy vistas and the green welcome / Of the Groves of the Fortunate Ones who dwell in joy.” For these souls, there is an optimism that looks not to the expansion of empire but instead to the pastoral bliss of the afterlife. Like Aeneas resurfacing to tell his men of their forthcoming campaigns, Heaney himself seems to have returned after three years with his own report of Virgil’s “green welcome.” Not with prophecy of conquest, but with news of his fortune, his relief.