Plein-Air Art and Its Practitioners
By Daniel Grant
Arts 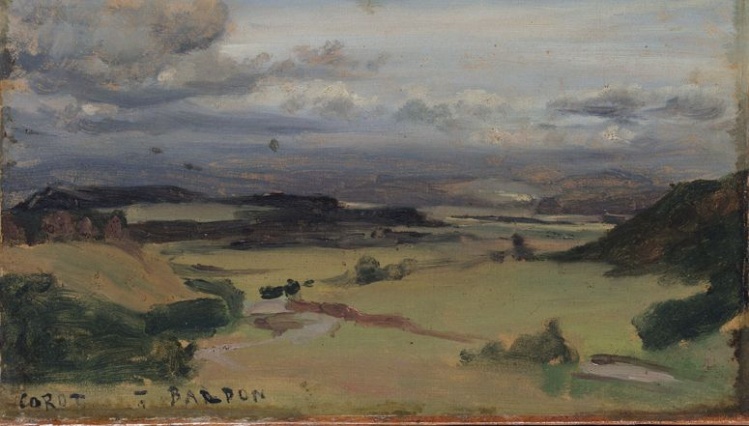 If you were to judge plein-air painting by the current crop of artist societies that specialize in, and set rules for, painting outdoors, you might think this a highly fussy, retrograde field of art, and small wonder. Ruth Westphal, an artist in Newport Beach, California, and author of two books on plein-air painting, claimed that “the style needs to be Impressionistic. It can’t be photo-realistic. No small brush strokes.” Other elements that define plein-air painting “are an interest in light and the evanescence of light, colors set next to each other and not mixed to show changes in light, and built up areas of impasto.” And, of course, the actual painting must be done outdoors. According to the Great Lakes Plein Air Painters Association, a “true plein-air painting is always completed from beginning to end on site with the subject matter before the artist,” while the National Association of Professional Plein Air Painters sets a standard of “90 percent completed on site and painted from life.”

Conversations with present-day practitioners of plein-air painting, as well as comments posted on the forum pages of plein-air websites, are filled with definitional disputes and claims that someone is cheating. Nancy Tankersley, a painter and former gallery owner, described an instance of an artist at a plein-air competition taking a painting into the bathroom “to straighten up a telephone pole.” Don Demers, a painter in Eliot, Maine, and member of Plein Air Painters of America, reports that “there was one artist who went out to paint on location with a group of other artists—I was one of them—and this person did a few sketches and shot a roll of film, which he had developed at some one-hour place. Then, he stayed up all night in his hotel room, completing paintings that he called plein air.”

It isn’t only that painting outdoors is often less comfortable or convenient than painting in a studio. It is also somewhat more dangerous. Today’s plein-air artists sometimes bring guns with them. Wildlife artist John Seerey-Lester of Osprey, Florida, needs protection from his subjects at times, while landscape artist Linda Tippetts of Augusta, Montana, is more worried about people who might bother her. “I’ve been in places where I put my pistol on the easel,” she said. “I’ve never had to use it, but I want people to see it’s there.” Another artist, Walt Gonske of Taos, New Mexico, carries a mace gun, which he also has never actually used, but he has known human-caused danger. “Once, I had a beer can thrown at me from a car going fifty miles an hour,” he said. “Thank God, it missed, because that would have really hurt.” He added that other friends, also outdoor artists, “have been shot at.”

Dangers of painting outdoors can be quite real. In 1996, painter Stephen Lyman hiked into Yosemite National Park, fell, and died of exposure. Wildlife artist Simon Combes was killed by a charging Cape buffalo while walking in Kenya in late 2004. Framingham, Massachusetts, painter Ben Aronson had a shotgun aimed at him by a farmer on whose land he had been trespassing (“I was in a field where there was nothing to steal, but I was clearly an oddity”). Certain precautions should be taken, such as asking permission before going on private property, not getting too close to animals, and not provoking them. (“I threw stones at an elephant to get good photographs of an angry elephant,” said Bernardsville, New Jersey, wildlife artist Guy Coheleach. “That was a stupid thing to do. I got a better sense of what a terrified artist looks like.”) Perhaps the plein air artist’s most sensible take-along is a friend to watch his back.

The current state of plein-air painting can seem weird to those who just like to look at art, but at one time taking one’s art supplies outside to paint a setting—generally, a landscape—right before one’s eyes was considered innovative, even radical, when it became more common practice in the late-eighteenth and early-nineteenth centuries. So many of the most esteemed paintings of the preceding time could only have been created inside a studio: the mythological and historical scenes that glorified the reigning nobility, shepherds tending their flocks next to ancient Roman ruins, and all those portraits of Lord So-and-So. Going outside to paint what’s actually there was a move to greater realism and a statement that the nation—France, for instance—was its land and the people who worked on it, rather than its ruling class.

A GOOD PLACE TO see a collection of top-notch plein-art paintings is at New York’s Morgan Library and Museum, where a changing group of the 142 oil sketches on paper, donated by Eugene and Clare Thaw, are placed on view in the museum’s lower level. “Don’t call it the basement, please,” said Jennifer Tonkovich, a drawings-and-prints curator at the Morgan. (The donation, in fact, was made to both the Morgan and the Metropolitan Museum of Art. The Met displays a smaller number of these artworks in its European Paintings gallery.) The collection includes works created between 1780 and 1860 by such artists as Jean-Michel Cels, John Constable, Jean-Baptiste-Camille Corot, Charles-Francois Daubigny, Simon Denis, Eugene Isabey, Achille-Etna Michallon, and Pierre-Henri de Valenciennes. If anyone could be considered a real rule-maker in the field of plein-air painting, it was Valenciennes (1750–1819), as it was his 1800 instructional guide Reflections and Advice to a Student on Painting, Particularly on Landscape that laid out the rationale for making oil sketches outdoors. Painting from actual nature would teach students to focus on what makes a particular landscape distinctive, and they would need to work quickly in order to capture the fleeting light and colors in the terrain. “Artists would learn how to manipulate their materials and develop their touch,” Tonkovich said, and most of the oil on paper works in the Morgan’s collection were “exercises, practice pieces.”

Most of these paintings were done in Italy, which, according to Tonkovich, “was still where artists went traditionally to study art. Italy had so much art to see, and the country was renowned for its light. Probably also, Italy was a good choice because it didn’t rain very much, which is helpful if you are going to paint outdoors.” The definition of plein-air painting is literally painting outside, Tonkovich noted, but as a practice it highlighted painting “pure landscapes, without figures…and appreciating nature in its own right.”

For the important government-sponsored salons, many of these northern artists painted traditional themes, “the big history paintings,” said Eugene Thaw, a retired art dealer and a member of the board of trustees of the Morgan since 1988. But the landscape elements—“the backgrounds, the mountains”—were based on their oil (on board or on paper) sketches, which they kept in their studios as points of reference. Occasionally, the artists traded sketches with each other, but they were never put on exhibition, or sale, during their lifetimes. “Corot, until his death, had almost all of these. He never sold one of them.”

Since the artists of this time didn’t need to abide by plein-air society rules, they weren’t always consistent in terms of doing all or even most of their plein-air pieces outside. Tonkovich stated that the Morgan’s Constable has pinholes at the corners of the paper, which suggest that he probably had tacked the sheet to an easel while painting outdoors, “but the surest way to know if a painting was done en plein air is documentation by the artist. Constable and Simon Denis both wrote on the paper where they did these works,” and other artists noted what they did in studio notebooks. After that, it is a matter of intuition and guesswork, which is what curators are paid to do for a living.

Aiding the development of plein-air painting was the development of portable art materials, such as paint in tubes and painting kits, which could be put in a bag and taken on hikes. Along with those kits and tubes were other made-to-order paraphernalia, such as stools, portable easels, umbrellas, and papers that were sized by manufacturers especially for oil paint.

Plein-air painting reached its high point during the Barbizon period in France. Barbizon is a town in northwest France where a group of the leading artists, including Corot and Daubigny, congregated during the middle decades of the nineteenth century. “During the 1830s, ’40s and ’50s, there came to be a greater acceptance of directly painted landscapes, and landscape painting itself became the dominant subject of art,” Tonkovich said. In addition, artists began treating their outdoor paintings less as practice studies and sketches and more as finished artworks.

Today’s plein-art artists and their societies tend to work in an Impressionistic style, more often than not in watercolors. (Watercolors actually make more sense if one’s aim is to capture the fleeting colors and shapes of nature, since oil paint offers more resistance to the brush and takes longer to dry. However, a benefit of oil paintings on paper, Tonkovich noted, is that conservation problems are fewer, as the oil paint is less susceptible to fading than watercolors and the paper is protected by the oil paint. “You can exhibit oil paintings longer, and at higher light levels, than watercolors,” she said.) Although usually associated with plein-air painting, the Impressionist painters were already moving away from the idea of producing finished works outdoors. “There was a change in tastes and in the market for art,” Tonkovich says. “The artists started to see these sketches not so much as their private visual diaries but as works for the market, things to show and sell at galleries.” Plein air, in short, became “self-conscious.” The artists moved back into their studios. Subsequent art movements and styles—generally, the history of modern and contemporary art (pointillism, fauvism, Cubism, dada, Surrealism, abstract expressionism, Pop, minimalism, conceptual art, and all else)—tended to a more abstract and urban sensibility that was less concerned with the actual objects in front of the artist than with a theoretical formulation of reality. Tonkovich notes that today’s landscape artists now come to the Morgan to look at the plein-air collection. Others should as well.