What Francis Means by ‘Fratelli Tutti’ 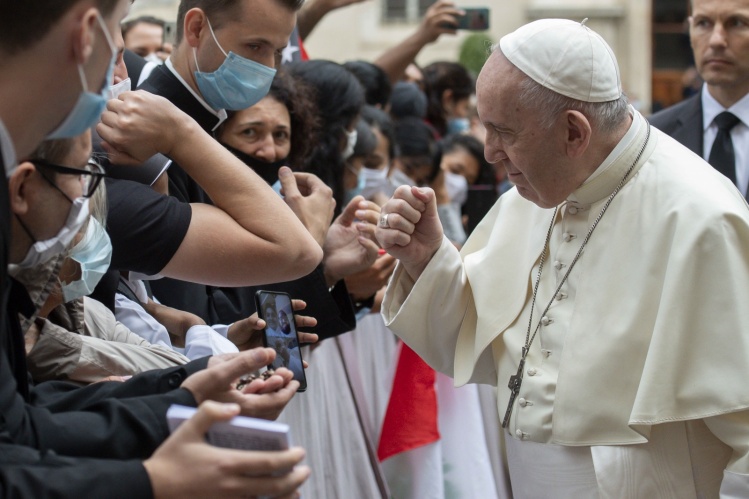 If you want to understand Pope Francis, it helps to know tango, soccer lingo, and colloquial Argentinian Spanish. Making sense of Francis, I propose, also requires an ability to think in hyperlinks. In other words, what he says opens paths to multiple references that further enrich and expand possibilities for interpretation. Francis plays with language and space. This is clear from the fact that his first trip outside of Rome was to Lampedusa, and most recently, in the title of his forthcoming encyclical, Fratelli tutti, to be signed in Assisi at the tomb of St. Francis.

There is no doubt about Jorge Bergoglio’s devotion to his medieval muse and namesake. From the moment his papal name was announced, his pontificate has been marked by a series of homages to the saint. Among the more obvious ones are the Umbrian words of the canticle that gave rise to his reflection on the care of creation and our common home in Laudato si’ (2015). A year ago, on the October 4 feast of the saint, the pope consecrated the Synod of Bishops of the pan-Amazon region to Francis. Soon, a much-anticipated encyclical on human belonging and solidarity will be signed on the day that Franciscans celebrate the Transitus of St. Francis, his passing from life through death to eternal life, and released publicly the following day on his feast.

Controversies abound over the title, an expression translated into English as “all brothers.” Franciscan scholars in particular point toward the Admonitions of St. Francis addressed in Latin to his fellow friars, “omnes fratres.” Admonition number 6, said to be the inspiration of the reflections that follow in the encyclical, begins, in its English translation, “Let us all, brothers, consider the Good Shepherd, who to save His sheep bore the suffering of the Cross.” As a direct quote from a document intended for a community of Franciscan friars in the thirteenth century, the reference is part of an in-house conversation. Considering Pope Francis’s memorable metaphor that calls ministers to be shepherds who need to be living with the scent of their sheep, there is definite resonance with what follows in Admonition Six: “The sheep of the Lord followed Him in tribulation and persecution and shame, in hunger and thirst, in infirmity and temptations and in all other ways.” In other words, shepherds who smell like their sheep must share the vulnerabilities, risks, and dangers of the flock. Not to be forgotten in this context are the words of the pope in an interview with Antonio Spadaro just a few months after his election: “I dream of a church that is a mother and shepherdess.”

While some have expressed legitimate concerns about the current title, I am intrigued as to why Fratelli tutti will remain in Italian, across all translations, when the Admonitions were composed in Latin. As I wrote earlier this year in my commentary on Querida Amazonia, Francis uses languages to signal intimacy. In a 2014 video to soccer teams participating in the “Match for Peace,” the pope apologized for delivering his message entirely in Spanish. This language, he explained, was the one of his heart, “es el idioma de mi corazón.” Like the upcoming encyclical, his 2020 post-synodal apostolic exhortation bears an untranslated title, Querida Amazonia, in Spanish. I believe that this is one way he communicates how dear this particular place, its issues, and its people are to his heart.

“Fratelli tutti,” the women repeated, as they cared for each suffering body, an acknowledgment of solidarity born out of their lived experience.
sharetweet

Italian too is a home language for Francis, the son of northern Italian immigrant families, and the words “fratelli tutti” have another life. In 1859, the carnage of war devastated the northern Italian landscape and overwhelmed the town of Castiglione delle Stiviere with thousands of casualties from the battle of Solferino and San Martino. Churches literally became field hospitals, sheltering enemies who were made vulnerable neighbors because of the suffering and space they shared. Ordinary townsfolk, many of them women and girls, cared for the wounded and offered a comforting presence for the dying. A monument near the cathedral now commemorates the sacrifice of these heroic women.

At the Duomo di Castiglione delle Stiviere-Santi Nazario e Celso, the cathedral-turned-field hospital, a Swiss Calvinist businessman, named Henri Dunant, got involved, as did other visitors and tourists to the town, accidentally thrust into a humanitarian crisis that was both local and international in scope. Dunant documents his experience in the book A Memory of Solferino. Readers beware: he describes the trauma and the gore in graphic detail. “Men of all nations lay side by side on the flagstone floors of the churches of Castiglione…ranged for the time being close together inside the chapels,” Dunant observes. He writes of injured, mutilated, and dying soldiers from all sides, some from across the Italian peninsula as well as troops who were French, German, Austrian, Arabs, Slavs, Bohemians, Croatians, Hungarians, and Africans from lands colonized by Europeans.

From their own limited resources and an abundance of compassion, the people of Castiglione responded to those who were broken by the horror of war. Dunant ponders the fact that it was the women who recognized that regardless of uniform, race, or nation, these were “all brothers.” “Fratelli tutti,” the women repeated, as they cared for each suffering body, an acknowledgment of solidarity born out of their lived experience. From the example of these women and the response of the town, Dunant was inspired to found what became the International Red Cross and Red Crescent.

Pope Francis is no stranger to the work of humanitarian networks and of all who share commitments to build a better and just world, while, at the same time, responding to crises that demand immediate attention. Care and accompaniment of those made vulnerable by circumstances and structures, of those pushed even closer toward the margins of our societies, economies, borders, and healthcare systems, are not only Catholic concerns. Mid-pandemic, the pope began his daily Mass on May 8 by remembering that, “today is the World Red Cross and Red Crescent Day. Let us pray for those people who work in these meritorious institutions. May the Lord bless their work that does so much good.” His homily focused on consolation, appropriate for the day that coincides with Dunant’s birthday.

In January 2018, Francis held an audience with more than six thousand members of the Red Cross and Red Crescent. Reflecting on their statutes, his remarks underscored the value to care for the suffering of others in ways that honor the humanity of all, without partiality or discrimination. This mission, also evident in Francis’s own commitments and in Catholic social teaching, is predicated on the cultivation of mutual understanding, lasting peace, and social friendship. He concluded his remarks by remembering their martyrs, those who “in performing their aid mission, have lost their life.”

The cathedral of Castiglione delle Stiviere is noted for yet another familiar face in the pantheon of care and solidarity with those who suffer. The Jesuit saint Aloysius Gonzaga was baptized and received his first communion in an earlier cathedral that stood on the same site where solidarity and care without exclusion were lived centuries later by the women who recognized “fratelli tutti” in suffering. Aloysius lost his life by caring for those stricken by plague in Rome.

For Francis, COVID-19 functions as a sign of our times, as locus theologicus, and as a metaphor for intersecting social injustices that it exacerbates and illuminates. Throughout the pandemic, he has thought aloud—through homilies, messages, reflections, and audiences—communicating a popular catechesis of belonging and of healing our interconnected relations with each other and creation. As we await his next encyclical, it is worth remembering that social teaching is not addressed solely to Catholics. Typically, the audience includes all people of good will. I do not claim to know the mind of Pope Francis, nor do I dismiss the concerns that have been expressed about the limitations of gendered language. I can’t help but wonder if “fratelli tutti” might also serve as a hyperlink to a larger world of meaning and solidarity.

Carmen Nanko-Fernández is professor of Hispanic theology and ministry and director of the Hispanic Theology and Ministry Program at the Catholic Theological Union in Chicago. Her publications focus on areas of [email protected]́ theologies, Catholic social teaching, sport and theology, and the intersections between religion and popular culture with particular attention to béisbol/baseball. She is founding co-editor of the series Disruptive Cartographers: Doing Theology Latinamente (Fordham University Press).