Can Legge 194 serve as a model for the United States?
By Massimo Faggioli
Abortion
Vatican 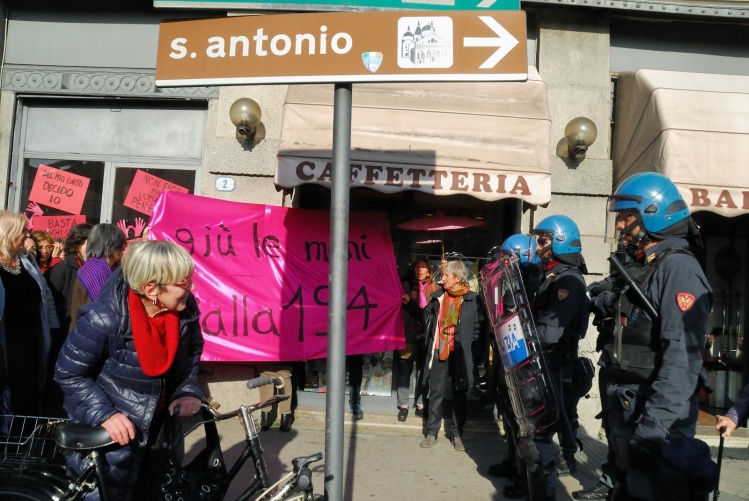 Commentary on the overturning of Roe regularly makes references to European countries in which legislative measures have led to politically and socially acceptable compromise on abortion—some set of restrictions on a procedure that nonetheless remains legal and accessible—as if these examples could suggest a way for the United States to proceed in the aftermath of Dobbs. Italy is sometimes specifically cited, and sometimes in connection with the role of the Catholic Church in so much of Italian life.

Legge 194 (or “The 194,” as Italians call it), which the Italian Parliament passed in 1978, allows women to receive abortions through the first ninety days of pregnancy, after getting counseling in a public medical facility. Beyond ninety days, abortion is permissible “a) when pregnancy or childbirth involves a serious danger to the woman’s life; b) when pathological processes are ascertained, including those relating to significant anomalies or malformations of the unborn child, which cause a serious danger to the physical or mental health of the woman.”

When there is the possibility of viability outside the womb, interruption of pregnancy is permissible only when pregnancy or childbirth involves a serious danger to the woman’s life, and then the doctor who performs the surgery must take all appropriate measures to safeguard the life of the fetus. Before Legge 194, a woman who had an abortion risked up to four years in prison, and whoever performed an abortion faced up to five years. “The 194” has survived constitutional challenges and even a public referendum in 1981; though it decriminalized abortion, it did not make it a constitutional right.

But does Italy’s approach really have something to offer to the United States? It’s important to remember that the social, cultural, and historical tides leading to Roe in 1973 (and to Dobbs a half-century later) are far different from those that led to Legge 194 in 1978. Italy’s legislation initially grew out of a larger, somewhat drawn-out effort to overturn the legacy of fascism, particularly the penal code of 1930 (known as the Rocco Code), which applied to a number of issues. First, in 1971, the Constitutional Court ruled that Article 553 of the code, which had outlawed the “incitement of practices against procreation,” was unconstitutional. In 1975, the Italian Parliament passed a bill on family-law reform that established equality between the roles of father and mother in terms of duties and dignity. Then, in February 1975, the Constitutional Court declared Article 546 of the Rocco Code on abortion unconstitutional, ruling that the protection of an embryo is not equivalent to the right to life and health of one who is already a person, such as a pregnant woman. In 1978, the remainder of the portion of the Rocco Code pertaining to “crimes against the integrity and health of the lineage” was repealed with the passage of Legge 194.

Still, the Constitutional Court and other courts in Italy played a relatively marginal role. Policy was mainly produced through the parliamentary process, beginning in 1973, when the Socialist Party MP Loris Fortuna (who advanced the law that legalized divorce in 1970) made a moderate proposal amending the penal code on abortion. And then there was the influence of the Italian Church: in 1975, the Italian bishops’ conference issued a document that reiterated traditional Catholic teaching on abortion, but also indirectly critiqued the Fascist-era concept of abortion as a crime against the integrity of race or lineage. Then came the national elections of June 1976, which in bringing about significant gains for the Communist Party (thanks in no small part to Catholic voters) also brought about the end of the anti-abortion majority in Parliament. Leftist parties (Socialist, Communist, Proletarian Democracy), liberal-capitalist parties (Republican, Liberal, and Social Democratic), and the Radical Party—supported by numerous associations and movements—soon drafted a consensus bill on abortion that passed in the lower chamber. After being initially rejected by the senate it was resubmitted, and in May 1978, it overcame opposition from Movimento Sociale Italiano (the neo-fascist party) and Democrazia Cristiana (the Christian-Democratic party, composed mostly of Catholics) to pass. The law was then promulgated by the president of the republic, Giovanni Leone, a Catholic. Neither Leone nor any of the Catholic parliamentarians who’d supported it were threatened with canonical consequences: none of them were denied access to the sacraments (in contrast to what we’ve seen in the United States not only recently but as far back as 2004).

Today, the right-wing parties led by Matteo Salvini and Giorgia Meloni care little about abortion, waging a culture war instead over the issue of immigration.
sharetweet

But things didn’t end there. In May 1981, 79 percent of Italy’s registered voters went to the polls to vote on a referendum that included two questions on abortion. One, put forth by the Movement for Life (officially nondenominational but largely composed of and run by Catholics), called for the repeal of Legge 194; it was rejected by 68 percent of voters. The other was advanced by the Radical Party, which called for further liberalization of abortion law—specifically, eliminating the prohibition on abortion for women under the age of eighteen, lifting the ninety-day limit, and allowing private health facilities (not just public) to perform abortions; this proposal was rejected by 88 percent of voters. Legge 194 has remained in place since, and its defenders note that the number of abortions has plummeted in Italy over that time. Indeed, its figures on abortion today are among the lowest in the world. But other factors must be considered, such as the more widespread availability of contraceptives and the morning-after pill. There’s also the undeniable fact that Italy’s population is growing older, far fewer women are becoming pregnant, and far fewer children are being born now than in the 1970s.

Legge 194 legislated three other important points: it established the role of judges in allowing abortions for underage women when the parents or legal guardians do not agree with the decision to abort; it mandated that women receive counseling in public health-care facilities regarding alternatives to abortion; and it protected conscientious objection by medical personnel opposed to abortion. This last point has been among the most debated provisions of the law since the time it was passed. In some southern regions of Italy, the percentage of medical personnel claiming conscientious objection ranges from 80 percent to 95 percent; in the North, it’s around 45 percent. This can make it very difficult for women to access abortion, according to progressives, who claim that as a result, unsafe “back-alley” abortions are on the rise.

If the passage of Legge 194 can be viewed as a response to Fascist-era penal codes, its place in Italian life must also be viewed in the context of the massive changes in Church-state relations in the latter part of the twentieth century. These include the Second Vatican Council’s call for a new relationship with secular states and respect for religious liberty of non-Catholics. For Italy, this meant updating the 1929 Concordat, with changes signed with the Holy See in 1984; revising family law regarding equality between the father and the mother; and, in October 1978, electing the first non-Italian pope in centuries, John Paul II. Passage of “The 194” and the 1981 referendum were decisive transitions for Italian society, and the second wake-up call for the Catholic Church in Italy—following the 1974 referendum allowing divorce—on the country’s secularization.

Legge 194 also brought Italy’s policy on abortion into line with those of other European countries. It did not liberalize abortion, nor did it create an individual or constitutional right to abortion, as Roe did in the United States. Rather, it established certain conditions under which abortion could not be punishable as a crime and set up mechanisms under which abortion would be handled within the public health-care system. The undergirding moral principle was not the will and agency of the pregnant woman, but a pregnant woman’s right to health—the idea being that both unsafe illegal abortion and legal abortion on demand violate that right.

When comparing Italy’s approach to abortion to that of the United States, all these factors must be kept in mind—the particulars of the legislation, the way it came into being, the lingering memories of fascism, and the role of the Catholic Church. The fact that Italy got to this point through parliamentary proceedings and a nationwide public referendum, and not via court interventions, is a critical difference. Further, even in this predominantly Catholic country, abortion never became the divisive and all-consuming political and cultural issue it did in the United States, because Italian politics is multi-party and consensus-driven—not two-party, winner-take-all. And while the Catholic hierarchy lamented Legge 194 and the referendum, and endorsed the Movement for Life, it never tried to mount the kind of culture war that U.S. bishops did.

Already by the 1970s, most Catholics and progressives in Italy agreed that abortion was a serious moral and social issue and needed to be discouraged and limited, but that it could be legislated thanks in part to Italians’ trust in the welfare state and a taxpayer-funded health-care system. The compromise, balancing freedom with moral concerns, was widely accepted. Even in the twenty years dominated by Silvio Berlusconi’s right-wing coalition beginning in the 1990s, abortion was never a significant part of its political platform. Today, the right-wing parties led by Matteo Salvini and Giorgia Meloni care little about abortion, instead waging a culture war over the issue of immigration.

Legge 194 arose out of a broad compromise between Italian progressive and conservative Catholics, and between leftist-progressive forces and the establishment. There was mutual suspicion about libertarianism, as well as general agreement on the need to strengthen institutions like the national health-care system and to prevent crusading, mutually exclusive campaigns on the issue of abortion. It was a way to do away with Fascist-era legislation at a time when Italian democracy was at risk. American democracy faces its own risks today. But if that’s the only parallel, it seems unlikely that the United States will soon find its own way to consensus.