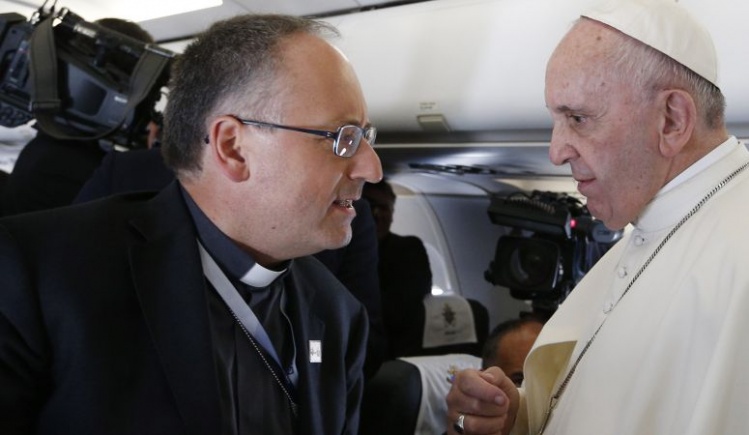 Fr. Antonio Spadaro, SJ, recently amused a great many people, though he didn’t mean to. Facebook and Twitter lit up with sarcastic responses to a tweet in which the editor of La Civiltà Cattolica—a close ally of Francis who has been called “the Pope’s Mouthpiece”—wrote, “Theology is not mathematics. In theology 2 + 2 can equal 5. Because it has to do with God and real life of people...”

Conservative Catholics jumped on it. Catholic World Report’s editor Carl Olson wrote on his Facebook page: “Fr. Spadaro might be a close confidant of the pope, but I wouldn’t want him teaching catechesis to my kids. Good grief.” On his website, he said the tweet “has a decidedly nominalist (or voluntarist) bent to it, for it rests on the apparent belief that God can indeed act contrary to what and who he is.” Catholic Culture’s Phil Lawler accused Spadaro of having an “irrational faith” and possibly believing that “God can and will violate the laws of logic.”

Some lectured Spadaro on his lack of logic. “1. Theology does embrace the principle of non-contradiction. 2. So does reality. What is wrong with Spadaro?” Some responses assigned political motives: “In order to control you need to eradicate any certainty.” Others wrote things like “From the film version of 1984” or parodies like “Theology is not veterinary science. In theology your cat can be a dog.”

What was the poor man actually up to? Spadaro was trying to make a point in an imaginative way. He wanted his readers to see how theology works by describing it with a startling contrast. The writer wants readers to say “Wait, no, that’s...oh, I get it.”

I felt for him. I use a lot of analogies and images in my own writing, and I know how easy it is to create one that can make you look dumb. You’re trying to help your readers see one thing they don’t understand by describing it in terms of something they do understand. In between the two things lies lots of room for mistakes.

Most people don’t speak theology, or speak it as you would speak Korean after one mail-order language course. Metaphors and analogies help them learn the language. For a writer, using them is a bit of a high-wire act, a kids-don’t-try-this-at home performance.

Was Spadaro’s metaphor such a big mistake—or a mistake at all? I don’t think it was, but even if he did fall off the high wire, these things happen. “Nice try” would have been a reasonable response. I once played with the same metaphor to make a similar point and decided not to use it. I thought that readers would get too caught up by the fact that 2+2 doesn’t equal 5 and miss my point. It’s a good metaphor, though it might have worked better with more context than a 140-character tweet can provide.

My guess is that Spadaro was trying to make a point about pastoral care, though he said “theology.” The rules are necessarily general and simple, and many people’s lives don’t fit them. Everyone knows this.

Years ago, before I entered the church, I spent a couple of hours with an Opus Dei priest who complained about the people who applied the rules mechanically. He called them “manualists,” if I remember right. He said something very like what Spadaro said. Another conservative priest told me that he quietly admitted to Communion couples in irregular marriages if he saw serious progress toward resolving their situation. He thought this was right to do though strictly speaking against the rules. He did it (this is my reading) because it has to do with God and the real life of people.

I’m fairly sure that many of the priests who laughed at Spadaro treat pastoral care as if 2+2 does sometimes equal 5. And that many of the laity who laughed at him have enjoyed similar pastoral indulgence. Everyone’s a rigorist about someone else’s sins. The real problem with the response is that instead of just saying they thought Spadaro’s image didn’t work, a host of internet critics used it to try to show that he (and by implication the pope) was an idiot.

Had one of the conservative celebrity priests used the same metaphor, they would not have made fun of him. They would have read him as trying to do what he was trying to do. They may disagree with Spadaro on every possible issue, but they should play fair.