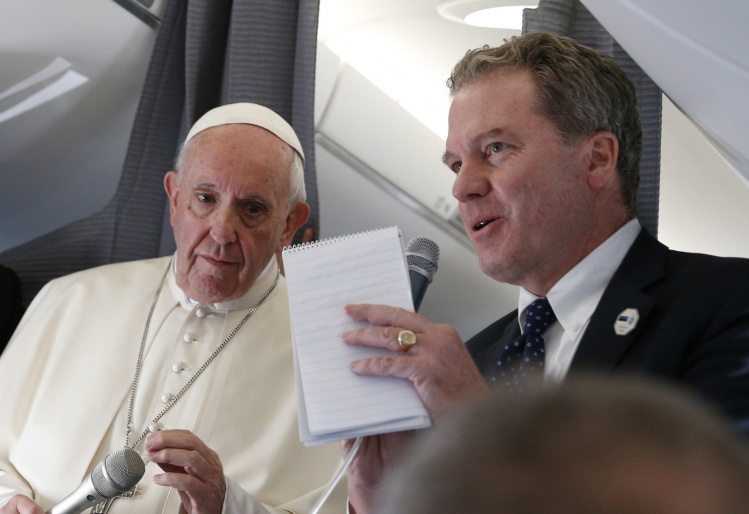 The abrupt resignation of Greg Burke as director of the Holy See Press Office is one more disturbing sign that the Vatican is not up to the task of responding to the Catholic Church’s crisis over clergy sexual abuse and its cover-up.

Burke, a St. Louis native and an alumnus of the Columbia University Graduate School of Journalism, brought an American way of doing business to a press office that not so long ago closed for the day at 1 o’clock p.m. He helped build what became an impressive presence for the church on social media, adapt the media operation to a twenty-four-hour news cycle, and create a positive image for a new pope. But the veteran newsman could not push the Vatican bureaucracy into responding quickly and forthrightly to developments in the clergy sexual-abuse scandal, and this clearly frustrated him through much of his tenure as the press office’s director.

In a New Year’s Eve tweet announcing that he and his deputy, the Spanish journalist Paloma Garcia Ovejero, were resigning effective January 1, Burke exited with an expression of affection for Pope Francis but not much else to say other than that the job had been “fascinating.” In a subsequent tweet, he apparently looked to dispel the notion that he was leaving because of personnel changes above his level in the Vatican communication dicastery, writing, “Just so you know, we had been praying about this decision for months, and we’re very much at peace with it. Grazie!”

“Fascinating” is a gentlemanly usage to describe what it was like to be the public face for the Vatican bureaucracy’s agonizing, incomplete response to fast-breaking international news on the cover-up of clergy sexual abuse. As a former Rome correspondent for Time and Fox News, Burke knows as well as any media professional that it’s important to respond right away to such a damaging situation. Clearly, his hands were often tied.

Burke was an outsider in an insider’s job, fluent in Italian but not necessarily in the level of nuance employed in Vatican-speak. The Vatican’s culture of caution and cover-up did not suit him.
sharetweet

Take, for example, the Vatican Press Office’s response to the August 14 release of the Pennsylvania grand-jury report on clergy sexual abuse last summer. For two days, it was “no comment.” A word from the pope was called for—in fact, the Pennsylvania attorney general had written to Francis about the investigation in advance of the report’s release.

“Why is the pope still silent on damning sex abuse report?” CNN asked in an August 16 headline. Finally, late that evening, a statement was issued in Burke’s name. “Victims should know that the Pope is on their side,” he was quoted as saying: “Those who have suffered are his priority, and the Church wants to listen to them to root out this tragic horror that destroys the lives of the innocent.” Burke was often put in the position of having to play catch-up.

In February, Burke issued a statement reporting that Pope Francis met several times a month with victims of clergy sexual abuse—a delayed effort at damage control following the pope’s insistence on defending Bishop Juan Barros of Chile a month earlier, in the face of accusations that Barros had covered up sexual crimes against minors. Francis had denounced the assertions against the bishop as “calumny”—and later, after an outcry over this offense against victims of abuse, the pope initiated an investigation that resulted in Barros’s resignation.

Burke also got to stand by Cardinal George Pell’s side at a 2017 news conference after Australian authorities charged the senior churchman with sexual misconduct. Burke read from a statement that Pell “has openly and repeatedly condemned as immoral and intolerable the acts of abuse committed against minors” and, as a bishop, “introduced systems and procedures both for the protection of minors and to provide assistance to victims of abuse.”

Pell was reportedly found guilty in December, but as far back as 2016, enough was known about him for the Daily Beast to headline a story, “An Australian royal commission on clerical crimes finds evidence that one of the Vatican’s most senior cardinals turned a blind eye to sex abuse. So why doesn’t the pope fire him?”

So often, and for so long, the Vatican’s response to allegations of sexual misconduct and cover-up has been too little, too late. It’s apparent why Burke’s enthusiasm for the job dimmed.

The sudden departures of Burke and Ovejero are being dissected through the usual anti-Francis ideological monocle used to view Vatican developments, especially since Burke’s role as a numerary member of Opus Dei gives him cred as a Catholic conservative. But I would look at it through a different lens: as an American, Burke was an outsider in an insider’s job, fluent in Italian but not necessarily in the level of nuance employed in Vatican-speak. The Vatican’s culture of caution and cover-up did not suit him.

A year ago, EWTN asked Burke about his favorite moment in Pope Francis’s annual Christmas address to the Roman Curia, a talk that, in earlier years, had been a pointed attack on the dysfunctional Vatican culture. Burke said he’d gotten a laugh from the pope’s recall of an archbishop’s quip that “Making reforms in Rome is like cleaning the Sphinx with a toothbrush.”

Greg Burke is not the only one tired of that.