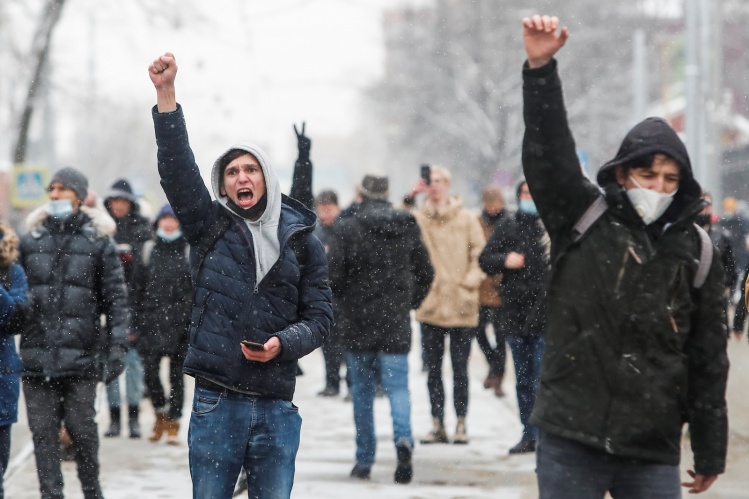 When the political activist Alexei Navalny returned to Russia in January after five months in Germany, where he had been recovering from a gruesome nerve-agent attack likely perpetrated by the Kremlin, he was promptly arrested for violating parole and sentenced to two-and-a-half years in prison. Suddenly, Vladimir Putin seems more concerned about the threat of a free, popular opponent than the bad optics of an imprisoning one on obviously flimsy grounds.

Navalny’s arrest was met with protests by tens of thousands of Russians across the country’s eleven time zones. Thousands of protesters have been brutally beaten and detained by heavily armed police. Navalny’s team, seeking to avoid these ongoing clashes, moved their protests to social media on February 14. This was a natural choice for Navalny, a favorite among younger Russians. The forty-four-year-old rose to prominence through his YouTube channel and blog, taking advantage of Russia’s free internet to post videos like his recent exposé about a $1.34 billion mansion allegedly built for Putin using fraudulently obtained funds. That video quickly garnered more than 100 million views, and was referenced in signs and chants by protesters.

Though he brushes off Navalny in public statements, Putin is clearly worried that Navalny has become a rallying point for Russians dissatisfied with the president and his party. Reluctant to make Navalny a martyr, Putin had previously permitted him to avoid extended stays in prison, despite repeated arrests. Navalny’s current sentence relates to a money-laundering accusation from 2014. The European Court of Human Rights deemed the charge “arbitrary and manifestly unreasonable,” but that hasn’t stopped Putin from using it as a pretext to bar Navalny from running for office.

Putin is clearly worried that Navalny has become a rallying point for Russians dissatisfied with the president and his party.
sharetweet

The recent protests have attracted support from Russians across the political spectrum, including many who find Navalny’s personal history of nationalist and xenophobic statements off-putting, but nevertheless believe he is a catalyst for change. This coincides with waning support for United Russia, the country’s ruling political party, which has seen a sharp drop in its approval rating in recent years. In 2018, the party passed legislation to raise the retirement age, which was deeply unpopular with its most loyal constituency—people over the age of fifty-five. Meanwhile, stagnant wages and increasing poverty, partly due to the pandemic, have also led to greater discontent. Navalny’s team has tried to capitalize on this, launching a “Smart Vote” app and website in 2018 that recommends the most popular non–United Russia candidates in every region and municipality, whether they are from the Communist Party or the far-right Liberal Democratic Party of Russia.

In the months between now and September’s legislative elections, Navalny and his allies face several challenges. It’s difficult to sustain long-term enthusiasm for protests, especially during a pandemic, and many Russians now feel that voting is futile: Putin is well known for stuffing ballot boxes. Despite President Joe Biden’s promise to be tougher on Putin than his predecessor, calls by the United States and other Western nations for Navalny’s immediate release have been ignored.

But Navalny and his team remain undeterred, viewing the assassination attempt and prison sentence as signs that Putin and his cronies are getting nervous. But silencing one man won’t stem a massive tide of protest. As Navalny reminded the Kremlin in the fiery speech he gave at his sentencing: “You can’t lock up millions and hundreds of thousands of people.... You can’t lock up the whole country.”