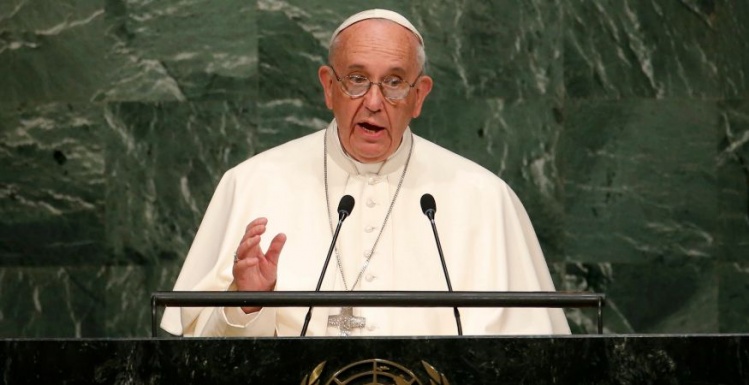 PHILADELPHIA— Two passages in Pope Francis’s kitchen-sinked address to the UN yesterday stuck out as especially intriguing: his assertion of “a right of the environment” (not a right to the environment) and his renewed call to abolish the death penalty (not to hardly ever use it, as the Catechism has it). In the run-up to Laudato si’, some theologians (or at least one) wondered whether Francis would build on traditional calls for environmental stewardship to argue that nature itself has rights. And anyone with ears to hear has known that the pope has been strenuously pushing the church to reject capital punishment, even going so far as calling life sentences a “hidden death penalty.” In his comments on the “right of the environment” and capital punishment, is the pope, as David Gibson put it, developing doctrine right before our eyes?

Calling “right of the environment” a “new expression,” Lombardi cautioned against interpreting the phrase as a “technical expression.” It’s true: Francis did not say much about what he means by this right, but he did argue that it exists because “we human beings are part of the environment.” Of course, the philosophy of rights is a complicated subject, and it’s not at all clear what it would mean for a non-volitional part of creation, indeed creation itself, to have rights. Perhaps that’s why in the printed version of the address the phrase is tucked between quotation marks. Or not—because he says there is “a true ‘right of the environment.’” Maybe Francis wants theologians (and the rest of us) to take the ball and run with it. Whatever his intent, as Lombardi acknowledged, the phrase is new—and therefore significant.

Also significant was Lombardi’s answer to Lamb’s question about the death penalty. Is Francis developing that teaching? Yes, Lombardi said. And then he reminded the assembled journalists of another of Francis’s concerns: life sentences, which he has likened to “dying every day.” Perhaps, Lombardi suggested, “he will also deepen this expression in the future.” That future may be near. Francis’s second stop during his very full Sunday in Philadelphia? Curran-Fromhold Correctional Facility. Theologians, start your engines.

On synod eve, Kasper proposal gets a boost. (UPDATED WITH VIDEO)