'The Work of the Dead' 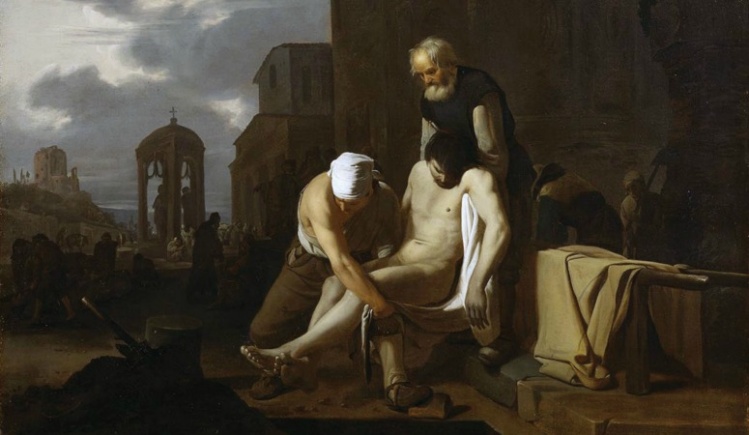 “Why?” a priest asked me years ago, “Why is it they always call you first?” I was calling to set the time of a funeral for the coming Saturday, which would further beset a churchman’s schedule already stuffed with duties and detail.

“Why do they always call you first?” he asked again on the way to the cemetery in my hearse that Saturday morning, when his attention to the graveside rubrics would make him late back to headquarters, where the newborn baby to be laved and claimed, the new bride and groom with their vows and fineries, the weekly penitents and evening Mass attendees would all be waiting. Thus the lamentation of the parish priest: that he is pulled in all directions at once, and to be present to the needs of some makes him missing in action to the needs of others.

“Well, Father,” I told him, “it’s because we answer the phone.” And it was and remains so: the 3 a.m. phone call most likely to be answered is not to the church, the therapist, the bank or insurance company, the accountant or doctor—each of them buffered by business hours and answering machines. The “first call,” as we undertakers call it, is reliably answered at the funeral home, where someone who knows what to do is up and waiting, or sleeping with an ear cocked to the call for help when someone dies.

“And why is that?” the good priest continued.

In the early going we do not need liturgy or sympathy or therapy or pharmacy so much as we need someone to help with the heavy lift: to get the dead off the floor and out the door, whether from the E.R., the O.R., the ICU or hospice ward, kitchen or bedroom, bathroom or backyard.

Thomas W. Laqueur’s richly annotated, indexed, illustrated, and thorough-going study of Western Europe’s management of mortality could be a companion volume to Sandra Gilbert’s equally ambitious and nearly as lengthy Death’s Door  (Norton, 2006) or to the art historian Robert Pogue Harrison’s The Dominion of the Dead (University of Chicago, 2003), a study of humankind’s etymological connection to the humus, the dirt, whence we arise and whither we return. Harrison ruminates on the space, occupied by religious impulse, between mortality and the mortal who has ceased to be, between the idea of death and the dead.

And what does Laqueur mean by “the dead”?

They are those whose bodies are treated as dead—buried, burned, tossed into the sea, left for birds to eat—but who remain powerful in the imagination of the living under very different assumptions about what or where they really are, whether they are anything, or whether they have efficacy in the world of the living. The dead, in short, are a powerful category of the imagination, and the corpse is their token, then and now. And as such, they—the corpse and whatever the dead are or are not—play an important role in the affairs of this world. It appears to be impossible to live for long with the stark sophism of Diogenes [who ordered his dead body discarded without ritual or regard], whatever one might believe. The work of the dead—dead bodies—is possible only because they remain so deeply and complexly present and because they share death with its other avatars: ancestors, ghosts, memory, history.

Of course, the dead, and the work they do by pressing the living to consider some of the signature questions of our species—“Is that all there is?”; “What comes next?”;  “Are we all alone?”; “Could it happen to me?”—and several others of the existential sort, have been increasingly dismissed, distanced, disappeared, estranged from the living, to whom they used to be “so deeply and complexly present.”

More and more, our funeral customs treat the corpse like a nuisance to be disposed of with dispatch rather than sacred remains to be borne on its journey “home.” In a book, co-authored with the theologian Thomas G. Long (The Good Funeral, 2013) this reviewer argues that the fashionably ubiquitous “celebration of life,” which has increasingly replaced the requiem and obsequy, is notable for its dismissal of the corpse, in trade for uplifting music, hobby-themed memorial knick-knackery (the golfer, the gardener, the biker, or bowler), Hallmarky theology, and no real work because the corpse is notably nowhere to be found. It is the mortuary equivalent of a baptism without the baby or nuptials without a bride or groom. The modern funeral cannot bear the incarnate, according to Long, because we have “lost our eschatological nerve.”

Our disenchantment with the corpse, according to Professor Laqueur, is coincident with, and correlated to, the increased preference for an industrial efficiency in the burning of bodies, which have been demoted and downsized to “just a shell.” For those to whom the body is “just a shell,” the directive to “just cremate me,” makes a sort of minimalist sense, and in both cases the operative word is “just.” What such a mindset seeks riddance of is the burden and the bother of the grave and its gravitas, the heavy lifting required to shift the dead from one place to another en route to whatever heaven our faith used to lay claim to.

The work of the dead, whether they are buried or burned, in cultures where the dead still matter, takes longer than in those that regard the dead as debris. Which may be why the ten-hour burning of the Hindu and Buddhist dead in the East morphed into the blast furnace efficiency of one- or two-hour cremations of the British at Woking Crematorium or the first American cremations in Pennsylvania, in the 1870s.

The epigraph to Chapter 10 (“Disenchantment and Cremation”) of this often-astonishing text, is an excerpt from the Times of London in 1874, describing the disposition of one Lady Dilke.

The body of Lady Dilke, who died five weeks ago in London, was burned on the 10th inst. at Dresden. The ceremony was performed in the furnace recently invented for burial purposes by Herr Siemens, and the relatives of the deceased lady permitting strangers to be present, a large number of scientific men attended the experiment. When the company had complied with Herr Siemens’ request to offer up a mental prayer, the coffin was placed in the chamber of the furnace; six minutes later the coffin burst; five minutes more and the flesh began to melt away, ten minutes more and the skeleton was laid bare; another ten minutes and the bones began to crumble.  Seventy-five minutes after the introduction of the coffin into the furnace all that remained of Lady Dilke and the coffin were six pounds of dust, placed in an urn. The brother-in-law of the deceased was present.

In this, one can see the final stage of the secular science wresting control and custody of the dead from the church: the temple of the Holy Spirit reduced to a lightweight, portable, divisible remnant to be scattered hither and yon as the kin folk, not the clergy, see fit. The Work of the Dead is nothing if not a history of how the churchyard gave way to the public cemetery, which in turn is giving way to the crematory, which has, not incidentally, no clerical gatekeeper. If the church wants to reassert its place in the care and disposition of the dead, it must boldly declare that a faith whose claims are based on an empty tomb ought to reacquaint itself with the weight, the gravity, of bodies.

The way to Christianize cremation, which accounts now for nearly half of U.S. dispositions, is to embolden Christians to draw nigh the fire in the way they’ve always drawn nigh the open ground. This may require a bolder or less beleaguered clergy than we currently have, to make the time to go the distance with the dead—to see, in the flames hissing at the back of the retort, a version of those uraeuses of flame that coiled over the apostles on that first Pentecost, as emblems of the gifts of the Holy Spirit.

Thomas Lynch’s most recent books are The Sin-Eater—A Breviary and The Good Funeral, co-authored with Thomas G. Long. He has taught in the Department of Mortuary Science at Wayne State University, the Graduate Writing Program at the University of Michigan, and at the Candler School of Theology at Emory University.