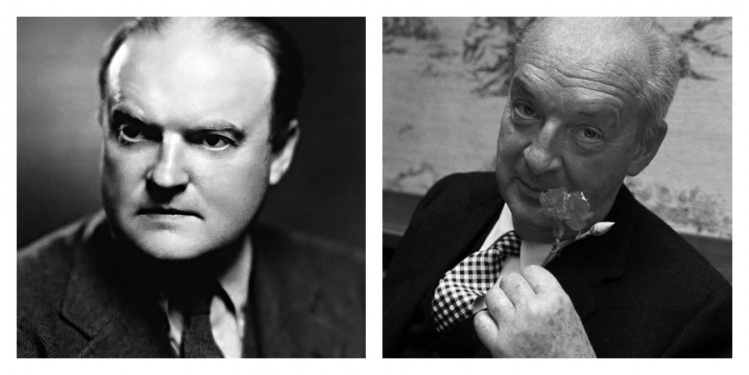 In the final act of Hamlet, our hero reflects on dispatching to their deaths Rosencrantz and Guildenstern, who have foolishly colluded in the king’s attempt to do him in. Hamlet tells his friend Horatio that the pair of knaves got what was coming to them, since “’Tis dangerous when the baser nature comes / Between the pass and fell incensed point / Of mighty opposites.” Journalist Alex Beam has been bold enough to write a short book about the struggle between two mighty literary opposites of the last century: the critic Edmund Wilson and the novelist Vladimir Nabokov. By subtitling his book “The End of a Beautiful Friendship,” Beam produces a witty take on things, since any “beautiful friendship” between two such aggressive, combative literary masters can’t but end by making “beautiful” an ironic word.

That relationship began in 1940 with a letter from Nicolas Nabokov, Vladimir’s cousin, hoping that Wilson could help find places for Vladimir to publish. When Vladimir himself wrote a bit later, Wilson as literary editor of the New Republic was able to commission a review for the magazine, and also recommend to Nabokov other possible publishing venues. As Beam suggests by way of explaining how the friendship of the two writers came about, Nabokov, new to this country and in need of money, was “flattered to have Wilson as audience and promoter,” while Wilson was charmed by the brilliance of this new Russian voice.

When they met soon afterwards, Wilson’s career was at its peak. His book about socialism and revolutionary thinking, To the Finland Station, had recently appeared, and he was turning out substantial essays on writers such as Flaubert, Dickens, Henry James, and, most pertinently, Pushkin. (Earlier he had brought out Axel’s Castle, his introduction to the “symbolist” writers, Yeats, Eliot, and Proust.) A major motive for his learning Russian, Wilson said, was to read Pushkin, and his relation with Nabokov had much to do with their mutual commitment to that language and its premier poet. Five years older than Nabokov, Wilson had a professional reputation; Nabokov was striving to build up a comparable one as a novelist. So their coming together was fortuitous indeed.

As friends they were close enough for one to ask the other a favor: Wilson inquiring about Nabokov’s teaching position at Wellesley and whether there was any chance of Wilson’s taking up such a position (no chance, was the answer); Nabokov wondering whether he might fill in for Wilson as a New Yorker reviewer (also no, since the editor had already filled the spot). They each found pleasure, particularly Nabokov, in teasing the other, especially in relation to the Russian language, where Wilson was an amateur. Nabokov was critical of Wilson’s too-uncritical attitude toward the Soviet Union; his own excellent characterization of Leninism was “a pail of the milk of human kindness with a dead rat at the bottom.” By implying that the political change from czarist Russia to the Leninist Soviet Union had meant the sudden replacement of oppression by glorious freedom, Wilson, said Nabokov justly, was ignoring the brief years of liberal democracy—during which Nabokov’s father was a government official—swept away by the Communist state.

Not content with being a superb critic, Wilson had aspirations toward writing fiction as well. An early novel, I Thought of Daisy, was followed in 1946 by Memoirs of Hecate County, a collection of tales with enough explicit sex in them to get the book banned in New York State. (Nabokov praised this justly forgotten novel, saying that he’d read it at one sitting.) To extend the erotic atmosphere, Wilson sent Nabokov a document from Havelock Ellis’s six-volume Studies in the Psychology of Sex, about the adventures of a young man. With Lolita beginning to occupy his imagination, Nabokov was grateful for the account, which Simon Karlinsky (editor of the Wilson-Nabokov correspondence) said provided further stimulus for the Lolita project. Yet when Lolita was finished and sent to Wilson in 1954, the latter’s response was at best lukewarm. He admitted to having read only half the book, thought it was one of Nabokov’s weaker efforts and told him so in a letter. Thus began the downturn in what had been an upbeat relationship.

For Nabokov, Lolita brought fame and fortune, enabling him to retire from teaching and devote himself to completing a massive translation of Pushkin’s Eugene Onegin, garnished with commentary amounting altogether to four volumes. Alex Beam describes this work, with its 1,895 pages, as “a doorstop composed of unequal parts hubris, genius, philosophical research carried to proctological extremes, heedless and needless provocation, often but not always informed by an exquisite literary sensibility.” Of those 1,895 pages, the translation itself took up only 257; a 92-page appendix justifying Nabokov’s choice of prosody and diction for his translation didn’t convince many reviewers that what seemed to them a misbegotten treatment of Pushkin was in fact genius. And especially not Wilson. In a July 1965 review in the New York Review of Books, Wilson claimed that Nabokov’s “virtuosity in juggling with the English language” had resulted in “an addiction to rare and unfamiliar words,” resulting in a translation Wilson judged uneven and banal.

Nabokov of course fired back, and the last hundred pages or so of Beam’s account rehearse in exhaustive detail the ramifying circumstances, reviews and counter-reviews, vituperation, insults, and witty putdowns (most of the wit is Nabokov’s) of a long-simmering feud. Beam doesn’t take sides, but stays above the battle in a detached, ironic, humorous way. In the process, his own obtrusive wit, too loud and pointed for its own good, often gets him into trouble. Take for example, that phrase “philosophical research carried to proctological extremes.” Really? Proctological? Wilson didn’t just harshly criticize Nabokov’s translation, he “carpet-bombed” it. In the five years Nabokov lived after Wilson died, he “tap-danced on his old rival’s tombstone.” When Robert Lowell intervenes to defend Wilson in the magazine Encounter, Beam calls it “putting his patrician paw in the barrel.” Harvard University is a place “where self-regard like mother’s milk flows through the hallways,” while Cornell is “the moose jaw of that Ivy League.” Beam’s book is peppered with “catchy” slang like “hoo-ha,” “kooky,” “frenemy,” and “kerfuffle,” and with verbs that are sometimes too active: Nabokov gets space in Encounter to “kiss off” Lowell; Wilson, solicited for unpaid income tax, “continued to stiff the IRS.” One paragraph is kicked off by a single word, “Ugh.” At a couple of points Beam even decides to address his two warriors directly, as in “But really, Vladimir,” or “God bless you, Edmund.”

Why all these verbal fireworks? My hunch is that, in the presence of two such formidable writers as Wilson and Nabokov, Alex Beam wanted a piece of the action, as it were, and decided to make us aware of his presence by showing that, for all the genius of his subjects, he was in charge. When he chooses to, he writes an authoritative and relatively straightforward prose, as when near the book’s end he sums up the Wilson-Nabokov relationship as originally a two-way street, Nabokov benefiting from Wilson’s connections with the literary world, and Wilson enjoying “the intellectual banquet of Nabokov’s capacious knowledge of Russian and European literature.”

Over time, Beam continues, the relationship mattered less to both men:

Nabokov found his own, wider audience. Editors came to him, he didn’t need an intermediary. Wilson, alternately indifferent to and fascinated by the tidal wave of Nabokov’s post-Lolita fame, started to lose interest in the friendship. After all, Russian and Pushkin were just two of his many enthusiasms.

Yet this was not quite the last word. The year Nabokov died, 1977, a retired British diplomat, Sir Charles Johnston, published a translation of Onegin with rhyme and meter in the Pushkin stanza—a masterly introduction to the poem for one, like me, who has no Russian, but also a translation that defied every conviction and rule that Nabokov had brought to bear in his version of the poem. A few years later, Johnston in an interview made remarks that provoked Dmitri Nabokov—the writer’s son, translator, and steward of his literary estate—into angry retort, after which Johnston replied in kind, and then Dmitri likewise. The protagonists might have been gone, but the feud lived on.