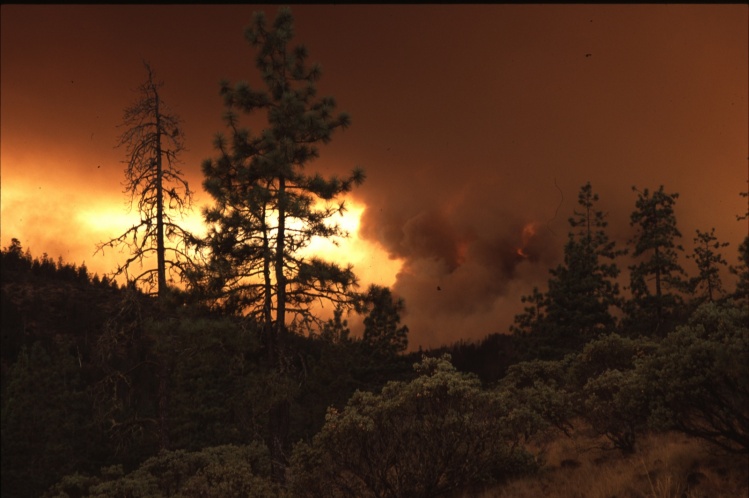 Wildfire in the Pacific Northwest (Bureau of Land Management)

In early September a teenage boy in Oregon tossed a firework into dry brush. It sparked the Eagle Creek wildfire, which to date has burned almost 50,000 acres and still is not contained. When the fire began, my great-aunt and uncle evacuated from Cascade Locks, the Columbia Gorge town where my family has roots. Firefighters surrounded Multnomah Falls Lodge, trying to protect the historic wooden structure. My parents had their first date at the Falls; my dad proposed to my mom there. A few days of burning later, another aunt and uncle evacuated. Miles away, my parents washed ash off their cars with the garden hose.

In New York, I stared at the news photographs: firs and hemlocks in black silhouette, oranges glittering with sickening beauty. The images were multisensory; to look at the fire was to hear crackling, smell the smoke that made the hills look haunted.

September was a month of natural disasters and their aftermaths: Hurricane Harvey, Hurricane Irma, Hurricane Maria. Earthquakes in Mexico City. Then, fresh fires raging in Northern California. But it took this particular conflagration for me to feel the weight of the wreckage. This burning threatened my identity’s landmarks—Cascade Locks, where grandpa grew up; Multnomah Falls, where mom and dad committed. It uprooted the people I loved. This was not the way things were supposed to be. To see fire and water and earth in revolt was disturbing. It felt supernatural.

On the web, apocalyptic language abounded; end-times hysteria spread. The apostle Matthew predicted floods; Peter, a roaring fire. Luke wrote of great earthquakes, famines, and pestilences, terrors and signs from heaven. “Christians claim Irma is the start of the END OF THE WORLD,” blared a tabloid, citing several self-styled modern-day prophets. My younger brother sent me a tweet he had seen. “Eclipse was on the 21st, Harvey began on the 25th, floods started on the 26th. If you Google ‘21 25 26’ this comes up.” Then, there was a graphic of Luke 21:25-26: “There will be signs in the sun, moon, and stars. On the earth, the nations will be in anguish and perplexity at the roaring and tossing of the sea.” Usually my brother ignored such forced connections. Now he wrote to me: “Is this a real verse? What do you think about this?”

The arrogance of modern people, to believe that logic always wins the day.
sharetweet

Normal people don’t think about the end of the world. I tend to associate the obsession with shoddy numerology, reductive history, and general paranoia. And yet, I understood why my brother was nervous; I was, too. Even mainstream media commented on the doomsday sentiments. “There was another earthquake in Mexico. Is the World Ending?” asked Slate. A New York Times headline absolved us: “Apocalyptic Thoughts Amid Nature’s Chaos? You Could Be Forgiven.” Both articles came down on the side of comfort. Hurricanes are in season, back-to-back earthquakes are common, humans find patterns in random events. “The world isn’t ending yet. It just feels like it is,” the Slate article concludes. But how could the author know that? No sources would confirm her blasé assurance. “In deeply religious communities, the recent sequence of catastrophic events and threats...can be understood more easily through prophecy than logic,” said the Times.

This seemed unfair, almost callous—the arrogance of modern people, to believe that logic always wins the day. Tell that to the flooded-out family in Houston, the kid without lights in Puerto Rico. In the midst of so much disaster, Revelation language felt essential, especially for people of faith: not to induce panic, but to set an emotional tone. To grant our discomfort some dignity. As the fires burned, real mourning, anger, and even repentance predominated among my fellow Oregonians. They posted long eulogies for the Gorge—backdrop of camping trips, cliff-side hikes, lazy river floats, frozen yogurts by the highway, home. That boy with the firework—the illogic of it. Sin could savage a forest.

The felt resonance of those passages—calls to fear and trembling, calls to mourning, repent for the day of the Lord is nigh—was important. These warnings and prophecies weren’t just spooky, disembodied weirdness scattered through the Bible, best ignored. Who knew how literal the visions of wind and water were? But their tonal gist was clear. For ancient people, it was unsettling to imagine cracks in the earth, buildings filled with water, and greenery turned to ash. For us it was too. That was appropriate—indeed, logical.

But what was to be done with these feelings? Even if the day of the Lord was nigh (who knew?), I worried in any case that relying on it might create apathy. Humans were not to be passive children, waiting for God to tidy our messes. In anticipation of His coming, quiet like a thief in the night, we were to be busy squaring our accounts. What if apocalypse prompted action? What if natural disasters reminded us not only of our smallness, but of our stewardship?

The fires still burn, but the news has moved on. Relief funds are allocated. Think pieces put a positive spin on things—the fires burned out the dead brush. End times are forgotten. Policy is proposed: more controlled burns throughout the year, evacuate this way next time. My family returns to their homes, which still stand. New photographs are posted: swatches of green amid the destruction. All great, for God is good, a giver of rainbows. And yet, I don’t want these apocalyptic urges to be dismissed; I don’t want the desire to couch nature in a grander story to be explained away. We must remember how perilous our flourishing is, and all that we yet have to do to ensure it.