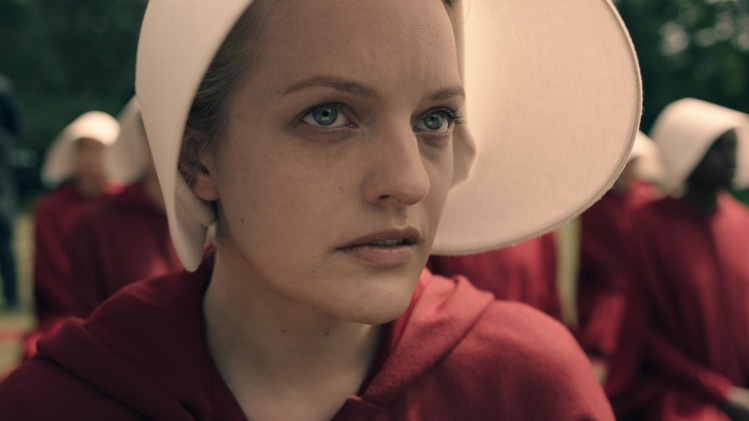 The brutality unfolds with a precision so choreographed it’s worthy of Busby Berkeley. In the Republic of Gilead, a totalitarian theocracy that has supplanted the United States, women are arriving for a “particicution”—an execution by mob. The execution relies on the subset of Gilead women who have been compelled to bear children for elite households. In compliance with the society’s rigid sumptuary laws, these “handmaids” wear red cloaks and white, face-concealing bonnets. In the lead-up to the execution, the camera gives the viewer a bird’s-eye-view of the women as they glide, in demure red-and-white lines, past black-clad men toting submachine guns. In an open-air death chamber, the handmaids kneel—a corps de ballet ready for a delirium of killing.

This sequence, in episode 1 of the Hulu drama The Handmaid’s Tale, epitomizes the harrowing power of this small-screen series, adapted from Margaret Atwood’s 1985 dystopian novel about a patriarchal theocracy. The show features a sterling cast, headed by the extraordinarily expressive Elisabeth Moss (Mad Men) as Offred, an intelligent, brooding handmaid. Launched in April, the series has struck a chord with Americans chafing at the policies and personality of President Trump, whom many consider an exemplar of misogynistic male privilege. Real-life protestors have recently donned red-and-white handmaid-style garb to demonstrate against what they see as infringements on women’s rights around the country. Meanwhile, Hulu has renewed its hit for a second season.

To judge by the first seven episodes, the show faithfully reflects Atwood’s novel, while amping up the political-thriller elements and allowing Offred more small consolations, such as moments of solidarity with other handmaids. Avoiding the monotonous tone of—The Man in the High Castle—Amazon’s recent dystopian series—The Handmaid’s Tale prudently employs shifting moods, often flashing back to pre-Gilead days, when Offred was a happily married editor and mother. That life was not to last: in the wake of a devastating plunge in fertility rates, apparently caused by environmental degradation, a coup toppled the U.S. government and imposed a regime in which women are forbidden to read or (mostly) work outside the home. Gays and lesbians (condemned as “gender traitors”) and religious dissenters (including Catholics) are persecuted or killed.

The Gilead elite deploy biblical verses to maintain control. For example, the story of Jacob, Rachel, and the slave-girl Bilhah (Genesis 30:1–8) is read aloud during the handmaid sex ritual. But it is obvious that the regime is cherry-picking its scripture. In an interrogation/torture scene, when an official (Ann Dowd) cites the Beatitude “Blessed are the meek,” Moss’s Offred feistily answers with another Beatitude—“Blessed are those who suffer for the cause of righteousness”—only to be beaten and shocked with a cattle prod.

When she is not escaping into memories of her husband Luke (O. T. Fagbenle) and friend Moira (Samira Wiley), Offred endures life in the home of the unpredictable Commander (Joseph Fiennes), who is married to the fretful Serena Joy (Yvonne Strahovski) and waited on by the mysterious chauffeur Nick (Max Minghella) and other servants. In a departure from the book, the Hulu series briefly shows us Gilead, and life before Gilead, through the eyes of Serena Joy, a writer who initially believed wholeheartedly in the regime. The incorporation of different perspectives—another episode adopts Luke’s viewpoint—both complicates and expands Atwood’s nightmare vision.

Imagery associated with vision has talismanic power in Gilead, where the secret police are called the Eyes and “Under His Eye” is a standard greeting. Atwood’s novel has already been translated into film, opera, and ballet, but it seems particularly fitting that it should find a niche in television, a format that both controls the viewer’s gaze and divides a story into episodes—not unlike the bonnets that allow the handmaids to see just a bit of the world at a time. 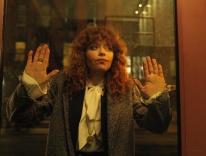