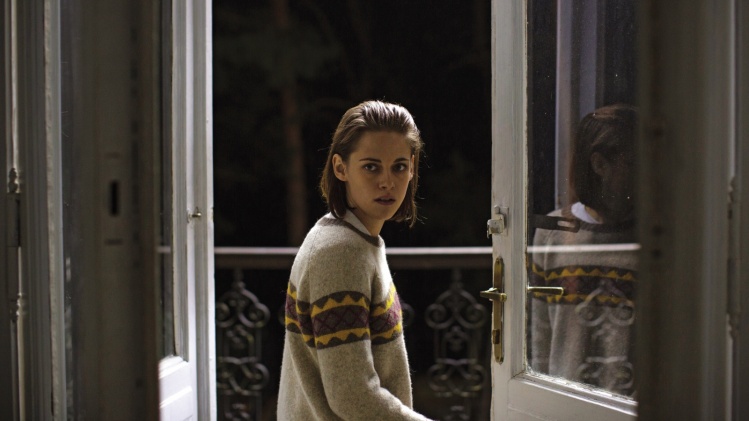 The plight of protagonists missing absconded family members, and seeking to reestablish contact with them, could hardly be more differently explored than in two current films.

Based on a graphic novel by Daniel Clowes, Wilson stars Woody Harrelson as a gleefully loudmouthed misanthrope who tracks down his estranged wife Pippi (Laura Dern), then sets off with her on the trail of their daughter, whom Pippi gave up for adoption seventeen years ago. The reunion offers Wilson a belated shot at redemption, which then blows up in ways that threaten to knock him still deeper into bitterness.

A giant among graphic novelists, Daniel Clowes was the force behind 2000’s Ghost World, which took a familiar genre, the coming-of-age movie, and polished it to a fine gleam of sardonic wit. That film followed a pair of teenaged girls drifting through high school, trading deadpan quips and sarcastic put-downs of classmates. Director Terry Zwigoff pegged the alienated adolescent’s cult of irony, revealing behind it a Holden Caulfield–like fear of the messy compromises of adult life. Ghost World’s take on the adolescent preoccupation with authenticity found its object in Steve Buscemi’s Seymour, a fortyish nerd, obsessed with record collecting, whom the girls worship, conferring heroic outsiderdom on a loner who in reality mourns the fact that “I can’t relate to 99 percent of humanity.”

Harrelson’s Wilson exhibits many of the same loser/loner traits. He goes through life assailing strangers with riffs on the fallen state of humanity, firing off rude one-liners meant to skewer what he sees as the hypocrisy and shallowness of conventionality (when a passerby on the sidewalk stops to coo over his dog, he mocks her, addressing her in the same cloying voice). Wilson’s excesses—together with his wife’s cackling, acerbic responses—create an enjoyably snarky-funny repartee; but it gets lost in a parade of sentimental tropes as director Craig Johnson struggles to make Clowes’s edgy scenarios more audience-friendly.

Unfortunately, he succeeds; and the result is an interesting train wreck of a movie. Johnson is trying to fashion a heartfelt family comedy from material that glitters darkly with droll and anarchic elements. Harrelson labors valiantly, but he’s got manacles on; hewing to a conception of his character—and to a Clowes screenplay—that reflects a graphic novel’s compressed emotional shorthand, he ricochets from casual snark to neurotic self-doubt to blissed-out poeticism, and finally to maudlin dopiness and self-pity. The result is a bizarre mix of Woody Allen plus Allen Ginsberg, channeled through Peter Sellers’s simpleton Chauncey Gardiner in Being There, and injected with a bug-eyed dose of Popeye the Sailor Man.

In Ghost World, Buscemi’s oddball brio buoyed the themes of Clowe’s novel; as a result, that film “stayed true,” as Chicago Tribune critic Michael Phillips remarked, “to the tone, rhythm, and sneaky pathos of the book.” Not here. As Johnson channels Clowes’s unruly energies into a straightforwardly crowd-pleasing product, what passed for deadpan irony in the graphic novel comes off in Wilson’s protagonist as borderline developmental delay, and makes both him and the movie itself seem, well, cartoonish.

‘Wilson’ is an interesting train wreck of a movie
sharetweet

Crowd-pleasing would appear to be far from what Olivier Assayas has in mind in Personal Shopper. Like Wilson, his film is a showcase for one actor’s talents (in this case, Kristen Stewart, best known for playing Bella Swan in the Twilight film series). But the similarity ends there.

Stewart’s character, Maureen, represents yet another iteration of that gauzy romantic trope, the American in Paris—though her experiences there might be enough to put an end to this frolic once and for all. As the film’s title informs us, Maureen works as an assistant to a wealthy celebrity socialite, Kyra (Nora von Waldstätten), charged with managing her extensive wardrobe. Assayas deployed a similar setup with Stewart in his last film, Clouds of Sils Maria, casting her as personal assistant to an aging actress (Juliette Binoche). Apparently, having to cope with the Binoche character’s precarious ego was insufficient challenge for her, so this time Assayas doubles down on the misery, and then some. Maureen, it turns out, is consumed by grief over the recent death of her twin brother, who succumbed to a genetic heart defect that she herself shares. Years before, she and her brother, who was unusually attuned to the spirit world, agreed that whoever died first would send the other a signal from beyond. Thus Maureen’s days are spent foraging the Rue Saint Honoré for expensive swag, and her nights hunkering down in the gloomy old house in the French countryside where her brother lived—and where she sits all night in pitch-black rooms while the house creaks, shimmery phantasms flit across the walls, and water taps suddenly gush on without warning. Wherever her brother is, it seems he’s thirsty, or wants a bath.

Assayas take what initially seems like familiar material for social satire—the misadventures of a young woman hired as helpmeet to the fabulously wealthy—and give it one tug sideways after another, until it no longer resides in the zone where we thought it did. The director practiced a subtler form of this shiftiness in Clouds of Sils Maria, surprising us with unexpected silences and narrative reversals, scenes entered in medias res, and maximum stress on things left unsaid. Here, he opts for changes not merely of pace, but of genre, combining crime drama, slasher film, contemporary satire, and ghost story. Did I say before that Harrelson’s Wilson presented curious admixtures of unlike elements? Well, Personal Shopper is The Babadook meets Keeping Up with the Kardashians meets Rififi.

Essentially a one-character story, the film is a feast for Stewart. She plays the same driven, unhappy, and vaguely neurotic young person she did in Sils Maria, but her disaffection this time is deepened by grief. As Maureen she exudes unhappy energy; her restless intensity is mesmerizing, and her dread and dismay infectious. This quality helps keep tension in a film in which a big chunk of the action consists of text messages. Stewart has an affinity for playing bitten-down agitation, as if accustomed to deep inner distress. Watching her, you may feel like reaching for the Xanax.

The plot Assayas works up in order to mine this disaffection comes across as halfhearted. Though Maureen spends her days selecting posh duds and jewelry for her celebrity boss, she herself dresses down—sneakers and sweaters, jeans, the typical millennial uniform—and her attitude toward clothes, as toward most things, seems one of casual but bitter contempt. Eventually she decides to both exercise and exorcise her contempt by committing the one trespass her employer has forbidden her: to try on any of those expensive clothes. When it finally plays out, the act seems less erotic fantasy or angry transgression than a desultory expression of Maureen’s own deep uncertainty about who she is.

That uncertainty mirrors a similar quality in the film itself. Personal Shopper is festooned with plot curlicues, like one in which Maureen, a would-be artist, becomes fascinated by the work of a nineteenth-century Swedish artist; the ensuing mini-seminar in the artist’s work is interesting, but leads nowhere and seemingly connects to nothing. Is this carelessness, or canny misdirection? There is no way everything in this film hangs together. But Assayas keeps you watching. Sometimes a film succeeds by being hard to pin down. There’s a jittery hand on the controls of this movie, and it leaves us feeling a bit shaken.

There is no way everything in ‘Personal Shopper’ hangs together, but Assayas keeps you watching
sharetweet
Published in the May 5, 2017 issue:
View Contents
Tags
Movies