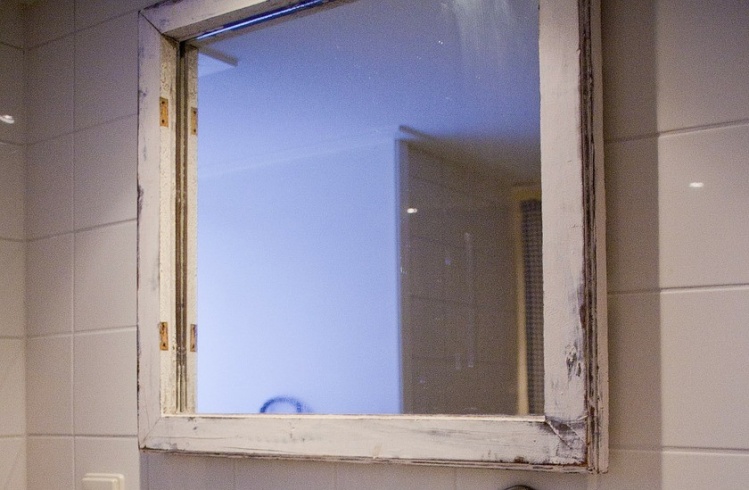 My sophomore year of high school, I moved into our house’s upstairs bathroom. There, I could feel alone in a house full of people (Needpix).

My sophomore year of high school, I moved into our house’s upstairs bathroom. There, I could feel alone in a house full of people, find solitude away from my three siblings. I slept on a mattress on the floor that I leaned against the wall when I woke up. The tub became an alcove, a place to read and think. I taped Virgin Mary prayer cards to its sides, and hung rosary beads from the shower-curtain rod. In need of comfort, I prayed for strength. “Please God, make me whole.” My parents helped me paint the bathroom walls sky blue. Later, I added white clouds.

The same year I moved into the bathroom, I stole two books from the back shelves of classrooms. The first one, from my English teacher, was a small Random House dictionary. Tucked in the tub, I drew stars by the words I looked up and copied out their definitions in a composition notebook. Eventually the dictionary’s red-cloth binding cracked; its cover fell off entirely. When a few pages ripped, I inserted the thin sheets back where they belonged.

Later that year I stole May Sarton’s Journal of a Solitude, published in 1973. The cover features a black-and-white photograph of Sarton’s office: a desk with a lamp, a typewriter, a glass of pens and pencils. In her November 11 entry, Sarton writes, “We are whole or have intimations of what it means to be whole when the entire being—spirit, mind, nerves, flesh, the body itself—are concentrated toward a single end.” To what end was I at sixteen bent? Toward learning how to write, yes, but also toward making sense of my life and God’s place in it. In an entry on November 17, Sarton writes, “One must believe that private dilemmas are, if deeply examined, universal, and so, if expressed, have a human value beyond the private.” She spoke of putting inner turmoil to good use. I kept the book by the bowl of the sink.

To what end was I at sixteen bent? Toward learning how to write, yes, but also toward making sense of my life and God’s place in it.
sharetweet

Inner turmoil was familiar to me. Four years earlier, when I was twelve, my father had begun to gather evidence for a court case against a priest who had sexually abused him when he was a child. He kept what he found in a cardboard box. One day I found the box in my parents’ closet and—remembering whispered conversations I’d overheard—realized what it must be for. Inside was a picture of my dad as a child, dressed as an altar boy, standing on the steps of a church. Another photo showed him as a teenager about my age: curly hair, mustache, bell-bottoms, purple T-shirt. He reclined on his side on a carpet, smiling.

The court case ended in a settlement. But even after its resolution, my father’s teenage trauma was mixed in my mind with the beauty and sacredness of the Catholic Church, and with my own burgeoning sexuality. In the bathroom, I thought things through. There, I had the necessary tools: bare pages, a pen, a small desk that covered the toilet.

From the start, I knew my living arrangement was a temporary carapace. Outside of the bathroom I grew hesitant and quiet; I was embarrassed. At the same time, I saw myself as brave and unusual, an artist. I wound a string of beads around my neck; I wore skirts made out of a tablecloths. One classmate called me “a waste of space,” another “a freak.”

After a year and a half of burrowing—reading, journaling, listening to classical music on a record player I managed to fit on a stand wedged between the vanity and the tub—the bathroom suddenly felt too small. It was spring and I was tired of being closed in a space that my arms could almost reach the width of. I moved back into the room I had shared with my sister and her television. I went outside to read and write. By this time, my father had moved out of the house, taking his complicated sadness with him.

These days, I turn to the psalms to help me understand those confused, creative teenage years. David writes of torturous dissolution: “I am poured out like water” and “my heart is like wax.” He asks for help, “But be not thou far from me, O Lord.” With his deliverance, he turns to worship: “He brought me forth also into a large place; he delivered me, because he delighted in me.” Redemption is the act of being brought into a wider space.