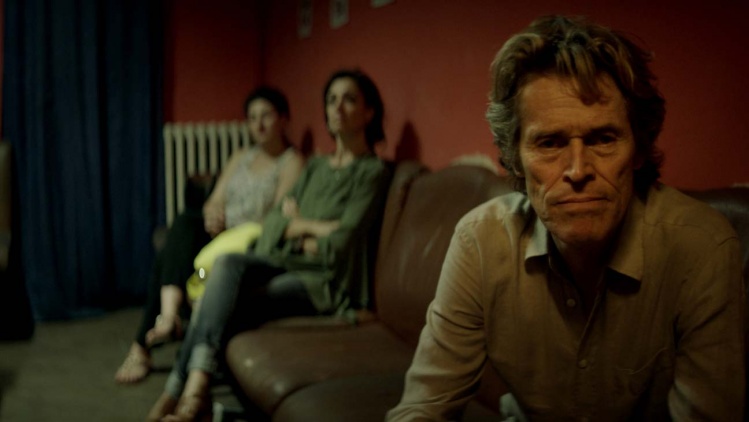 Through addiction, rehabilitation, and a post-recovery conversion from Catholicism to Buddhism, director Abel Ferrara has exhibited a scrappy sense of survival, a persistence reflected in films running the gamut from intimate chamber pieces to the wildly experimental. Yet even though he now carries himself with newfound (and frankly touching) calm, his tumultuous past cannot help but find its way into his newest movie, Tommaso, which joins a body of work chronicling troubled characters in downward spirals, most notably 1990’s Bad Lieutenant and 1993’s Dangerous Game.

Where Harvey Keitel’s tortured cop and Matthew Modine’s impulsive Hollywood A-lister were stand-ins for Ferrara, this time around it’s Willem Dafoe, who plays the title character, an American filmmaker in Rome. Tommaso amounts to something of a “composited autobiography” between actor and director, and as in previous films Ferrara’s “presence” never feels forced or performative. The casting of Ferrara’s wife, Cristina Chiaric, as Tommaso’s wife, and his daughter Anna as his child, adds to the authenticity. (This is not new: Ferrara cast a former wife and a girlfriend as themselves in two earlier movies.) On top of that, Ferrara’s own Roman apartment is the central location of Tommaso. All this domesticity serves a distinct purpose, which is to put the concept of domesticity itself under a microscope. And what’s revealed, in largely unscripted, improvisational fashion, is just how confounding and contradictory it can be: equal parts tranquility and tempest.

We see the former as Tommaso accompanies Anna to the playground or prepares dinner with Cristina. And when apart from his family he’s happily busy bouncing across a picturesque Rome to Italian classes (where he’s a student) and acting seminars (where he’s a teacher), from his favorite open-air cafe to AA meetings. He’s also hard at work researching and scripting his next film (which in another self-referential gesture is Ferrara’s own Siberia, a long-gestating project that had its festival premier earlier this year).

But this idyll doesn’t last long. Ferrara gradually chips away at the illusion of happy domesticity he’s created. We learn that Tommaso is sexually frustrated, a situation not helped by the fact that Anna sleeps in the same bed as mother and father. He’s also insecure and prone to hallucinations that Cristina is having an affair with a younger, attractive Italian man. These moments of self-doubt are subtle at first, slipping in among the quotidian rhythms of the narrative. But soon the visions begin to take over, and as they do, his grasp on reality seems to slip: Are his dreams encroaching on his real life, or is it the other way around?

Are his dreams encroaching on his real life, or is it the other way around?
sharetweet

Ferrara has described Tommaso as a “home-movie” for how the film came to be over a prolonged period of collaboration between the director, his cast, editor Fabio Nunzanti, cinematographer Peter Zeitlinger, and production designer Tommaso Ortino (from whom Dafoe’s character takes his name). Zeitlinger’s low-grade, widescreen camerawork lends immediacy to the most banal of Tommaso’s everyday activities, while Nunzanti’s editing puts us in Tommaso’s headspace, languishing during the more relaxing intervals and becoming more hurried as the protagonist grows increasingly frazzled. But even if Tommaso’s premise might encourage comparisons to Federico Fellini’s 8 ½ , a better analog would be the work of John Cassavetes, who frequently cast his wife, Gena Rowlands, and used their home as a setting, while similarly drawing on a rotating set of contributors and collaborators. Ferrara has acknowledged the influence of Cassavetes, and indeed, Dafoe’s Tommaso is subject to flights of surreality similar to the protagonist of Cassavetes’s 1984 film Love Streams. But Ferrara wisely chooses restraint over Cassavetes-style combustibility. The outbursts aren’t nearly as explosive, and they come organically as responses to ordinarily frustrating events. A typical example: Tommaso, unaware that Cristina’s phone has died and assuming the worst, frantically dials her over and over, and when he finally does make contact dresses her down more than necessary—yet the moment feels real. Likewise, the affectingly plainspoken scenes of the AA meetings, shot in a red-lit basement where attendees, including Tommaso, lay bare their personal histories of addiction while working their way toward uplift and recovery. (In one transcendent touch, we repeatedly see the shadows of a ceiling fan pass briefly over the faces present.)

That Tommaso verbalizes his own anxieties so plainly in these meetings helps us better comprehend his mania, his see-sawing between utter collapse and calm self-awareness. And yet Ferrara constructs the film itself as something of a Möbius strip, with no real signifiers of where Tommaso’s travails begin or where (or if) they might end. “Please, I need you,” Tommaso cries to wife and daughter in a genuine admission of need and love—yet what are we supposed to make of the fact that it happens as he’s chasing them down the street while wielding a broken floor lamp? Maybe Tommaso’s final dream, and the film’s closing scene, offers a clue: this moving tableau, something of a brief passion play held outside the Rome airport, recalls Dafoe’s performance in Martin Scorsese’s The Last Temptation of Christ, while hitting a level of spirituality that’s not uncommon in Ferrara’s work. It’s a signature image, revealing the director’s ability to blend cinematic, religious, and personal history into gratifyingly challenging art.

Tommaso can be streamed at Film at Lincoln Center’s Virtual Cinema.