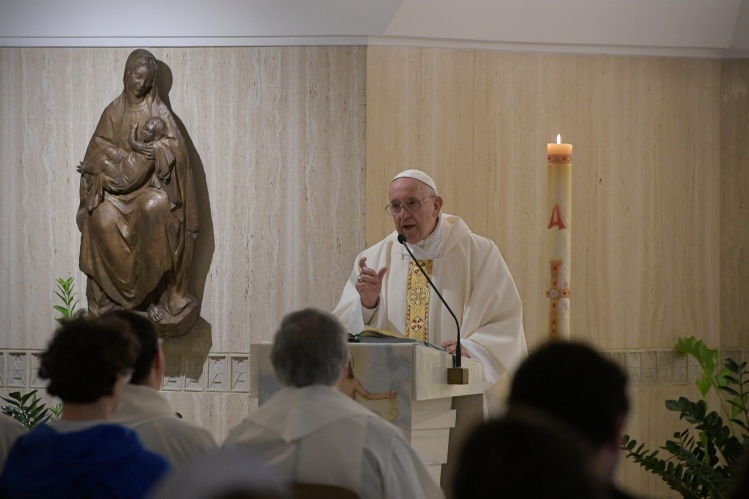 As predictable as a Baltimore Orioles loss, anti-Francis Catholics celebrated Corpus Christi with a misleading story about Pope Francis, of the “Look at how this foolish man is undermining the faith now” sort. It popped up in my Facebook feed, thanks to my disparate collection of Facebook friends.

A German Catholic site claimed in the headline, “Pope: Jesus did not multiply bread—he taught people to share.” (That’s the Google translation, which the Facebook posters used.) The subhead said: “The so-called ‘bread multiplication’ is one of the most famous miracles of Jesus: Five small loaves fill 5,000 people. But a real increase did not take place, says Pope Francis.”

Francis wouldn’t say that, you may be thinking. He’s never shown the slightest skepticism about the supernatural. If anything, he’s been a little more enthusiastic about it than Benedict. I don’t remember John Paul II or Benedict talking as much about the Devil, in as personal and familiar a way as Francis does. He talks about the Blessed Virgin with a simpler piety than the more philosophical John Paul II and more theological Benedict.

His critics think differently about this. As I pointed out a few years ago, they always read him as unscrupulous prosecuting attorneys. Among the comments I saw on one posting were: “So instead of believing God is faithful in providing for His children, our Pope wants us to believe that God promotes Socialism?” Another commenter said: “Impressive. I don't know how many people could deny the miracle of the five loaves and then turn it into a mini-diatribe against greed and capitalism.” Someone even accused him of Bolshevism: “The dialectic materialism of Lenin is strong with this one.” The same person accused Francis of heresy: “If what Zenit said is correct, then he is at least speaking of Christ in an almost Arian manner, since he denudes Christ of the ability to effect miracles, instead attributing it to trust in the Father. It’s bizarre exegesis.” And “It worked out so well the first time that Peter denied Our Lord I’m sure it will be okay this time.”

A few commenters tried to point to what the pope had said. That included a very conservative writer, who was trying to be fair, though she had (of course) to finish by blaming Francis for being “unclear.” The other commenters and the original poster ignored his defenders. The poster even added later, “You know what else people use the term ‘magic trick’ about, when they want to plant doubt in the faithful person’s mind? The Eucharist.”

It took me less than a minute to find the homily, search “magic,” and find out what the pope said. And—surprise!—that German newspaper headline is misleading and the subhead wrong. Here’s what Francis actually said. His critics could have found this out for themselves, but since they assume Francis is always wrong, why would they?

The pope tells us something we need to know, and frequently be reminded of.
sharetweet

​The pope points to the word “give.” This, he says, “tells us something very beautiful. Bread is not only something to be consumed; it is a means of sharing. Surprisingly, the account of the multiplication of the loaves does not mention the multiplication itself.” Jesus emphasizes the sharing, not the multiplying. “Jesus does not perform a magic trick; he does not change five loaves into five thousand and then announce: ‘There! Distribute them!’” No, says Francis. “Jesus first prays, then blesses the five loaves and begins to break them, trusting in the Father. And those five loaves never run out. This is no magic trick; it is an act of trust in God and his providence.”

Now, I confess I don’t find this attempt to get at the real meaning of the miracle very helpful. Preachers do this kind of thing a lot. It’s kind of like the new math of my childhood, which tried to teach children mathematical concepts without making them do the arithmetic. But the concepts only made sense once you’d done the problems. I think you get at the depth of the miracle by beginning with the feeling “That’s so cool!” Amazement at the miracle can and should lead to reflection on what it means. I like to move from the outward sign, the astonishing event itself, to the meaning. But my mind works differently from Francis’s, and I don’t have his pastoral experience. Unlike his critics, I don’t expect him to preach the homilies I would preach.

Still, it’s easy to see what the Holy Father is trying to do—easy to see, if you’re not reading him to convict. I think he’s trying to make us see this miracle as an act of love: the love that is the complete trust He has in His Father, and the love He has for His lost people. It is the love that draws together His Father and His people, the love we see on the Cross. The mode by which he does this, miracle or proclamation, doesn’t matter so much. It’s secondary.

Francis worries, not unreasonably, that we’ll see the miracle as a magic trick. We can easily focus on the miracle and not the purpose for which Jesus performed it. We are almost incorrigibly self-centered. We can too easily focus on the idea that Jesus gives us things, not that he draws us into love, into a life of sharing who we are and what we have. A miracle feels like a present, and everyone likes presents, but a life will cost us. I could be wrong, but that’s what I took from reading him, with trust.

But we can, reading Francis trustingly, find yet another purpose in why he said what he said. Jesus always works his miracles for someone who needs the help. He heals the sick because they’re sick. He turned water into wine to save a family from embarrassment. He fed hungry people. He didn’t turn five stones into a rock quarry or fill a bakery with bread when no one was hungry. He didn’t do things just to draw attention to his divine abilities. That’s why Francis notes that the miracle comes during the distribution of the loaves and fishes, not before it. (I’m indebted to my friend Matthew Boudway for this insight.)

But some people were content to pocket Christ’s gifts while ignoring the message that came with them. When Jesus talked about Himself as the sacrament (John 6), a lot of his followers bailed. They didn’t want that. Indeed, early in His explanation (v. 26), He says rather tartly, “Believe me, if you are looking for me now, it is not because of the miracles you have seen; it is because you were fed with the loaves, and had your fill.”

“Jesus loves you and this is how he shows it, and how he wants you to live yourself”—this seems to me the broad lesson Francis was teaching, through a close look at what Jesus does in multiplying the loaves and fishes. As he says near the beginning of the homily: “The Eucharist is itself a school of blessing. God blesses us, his beloved children, and thus encourages us to keep going. And we, in turn, bless God in our assemblies (cf. Ps 68:26), rediscovering the joy of praise that liberates and heals the heart. We come to Mass, certain that we will be blessed by the Lord, and we leave in order to bless others in turn, to be channels of goodness in the world.”

The pope tells us something we need to know, and frequently be reminded of. His critics miss a lot when they jump on any excuse to attack him.