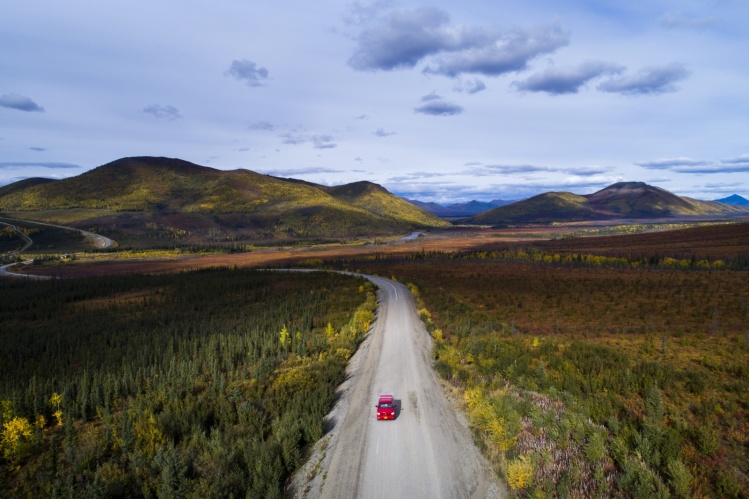 In 1992, I quit my job at my local newspaper and moved to Nome, Alaska, to join the Jesuit Volunteer Corps. I was only twenty-seven but felt jaded and hopeless in the face of the problems I wrote about in my hometown of Jersey City—AIDS, toxic waste, political corruption. I never seemed to make a dent.

The motto of the JVC is “Ruined for Life”—the idea being that once you join, you’re fundamentally changed, eager from then on to make a difference in the world. I had been raised Catholic but felt estranged from the church because of its positions on the gay community, birth control, women’s roles—the usual liberal lament. But I knew the Jesuits had a reputation for being forward-thinking, and I thought a year spent at a radio mission might just renew my faith. I thought I could bring some change by working with the 3,000-person community of Nome, where alcoholism, domestic abuse, and suicide were common problems.

On my flight in, an older man sitting in front of me turned around and asked, over the seat, “Where you headed, honey?”

Honey? “I’m one of the new KNOM volunteers,” I said. KNOM was the voice of western Alaska, the glue that held Alaska Native villages together. The man only gave me a wooden stare. “You know,” I said. “KNOM? The radio station?”

“I’m familiar with KNOM,” he answered. He paused again. He reached a hand out to shake mine. “I’m Father Jim Poole.”

Before I’d left Jersey City I’d received a package from the KNOM station manager that included a tape of the first broadcast and a history of KNOM (MONK spelled backwards), with a biography of the station founder—Fr. Jim Poole. He no longer ran KNOM, having moved to the Lower 48 back in the late 1980s. The station was now run by Tom Busch, a former volunteer, and his wife, Florence, an Alaska Native from St. Mary’s, the village on the Lower Yukon where Poole had worked back in 1959. Poole had rigged up a makeshift radio station there, a PA system from the Jesuit mission over which sermons, a nightly recitation of the Rosary, “Eskimo” stories, and pop music were delivered. (All this was still part of KNOM’s programming in 1992.) The PA line was extended to the village of White Mountain and then to all the villages of western Alaska in 1970, when the station in Nome was built.

Poole’s real voice wasn’t much different from the booming radio voice I’d heard on tape. I was surprised I hadn’t recognized it. Maybe it was the “honey” that had thrown me off. Poole said he was visiting KNOM for the first time in years. Then he went back to his Alaska Airlines magazine.

I could hardly believe it: the founder of the station, in a seat near mine, on my first flight in. Maybe it was a sign of good things to come. An omen. Or a Nomen. (KNOMers were full of puns.)

When people ask why my kids never made their First Communion, or why I don’t go to church anymore, I tell them the story of a disillusioned woman in her twenties who went to Alaska to find something besides herself, not even knowing what the word “disillusionment” could mean.
sharetweet

In many ways, that year in Nome was a revelation. Most of the JVs lived in a new house next to the station called Luella—named after Poole’s mother, who had been KNOM’s first volunteer. I covered local legislation, corruption, and Walrus Commission meetings. Between shifts, my friends and I partied a lot in the local saloons, worried a bit that we might be damaging KNOM’s reputation. The following spring, I covered a referendum in the village of St. Mary’s, where Poole and KNOM had gotten their start. There was a sadness hanging over the village, as in Nome, which I attributed to the high rate of alcoholism. But it was also a magical place. The ice had just begun to separate on the Andreafsky River and sounded like chimes as it pulled apart. While there, I met Frances, a young Alaska Native woman who’d gone away for college but had recently come back.

“When I was sad in the city, I just stayed sad,” she said, explaining her return. “I tried throwing my sadness away, but it bounced off the big buildings and came right back. Here,” she said, waving her arm at the river and the trees, “I toss it out and it keeps going.” I was starting to feel a little like Frances, having space for my sadness to fly in a place as lovely as St. Mary’s. I was beginning to feel a little closer to the church.

While I was in St. Mary’s, Peter Hans Kolvenbach, the Black Pope—the head of all Jesuits worldwide—flew in. No one had mentioned to KNOM that he was coming. I did an impromptu story and asked to interview him, but the Jesuits declined. They told me he was there to meet privately with the village elders. But I attended his Mass, where the congregation sang quiet hymns in Yup’ik. It was a beautiful and solemn ceremony. A few months later, I flew back to New York—my volunteer year over, my spirits slightly revived, my head partially cleared.

That summer, the JVC decided to pull out of KNOM. The new volunteers would be the last. Some of us worried our partying in Nome had something to do with the decision. Only much later did I learn the real reason. By then I’d returned to the church; I had children, had them baptized, and was taking them to Mass. But in 2004, when my daughter was still an infant, the news came that, for decades, Fr. Poole and some of his fellow priests had been molesting Alaska Native children. The allegations were just beginning to break that spring when I was in St. Mary’s—which now I realized probably explained Kolvenbach’s visit with the village elders. Yet by then, the church already knew of Poole’s history.

He had been banished from St. Mary’s in the 1960s for abuse and was sent to Oregon, where the abuse continued. He was then sent to Nome and eventually to Barrow, where he molested a six-year-old. He landed in Nome again, where he opened and manned the station until the 1980s, when he was run out once more and sent back to the Lower 48.

Because no one at KNOM knew about the allegations, volunteers continued playing Poole’s sermons and, using a signature machine, signing fund­raising letters with his name. Not only I, but dozens of others, were made complicit in the church’s actions. I had pushed the button on Poole’s homilies and prayers, broadcasting his booming radio voice over the airwaves into the homes of his victims. I added to their pain by reminding them of him on a daily basis.

After reading news of the lawsuits brought against the Diocese of Fairbanks and the Oregon province of the Society of Jesus, I left the church for good, a decision mixed with guilt and anger. Guilt that I hadn’t dug deeper while working as a reporter in Alaska, anger over not being the slightest bit aware of something so horrific unfolding around me.

When people ask why my kids never made their First Communion, or why I don’t go to church anymore, I tell them the story of a disillusioned woman in her twenties who went to Alaska to find something besides herself, not even knowing what the word “disillusionment” could mean. I tell them about the aurora borealis and skiing on the sea ice and hearing true silence for the first time out on the snowy tundra. Then I tell them about Poole and how the diocese covered up his actions, pretending he was still an active leader at KNOM to help raise money. I tell them how Poole molested one of his previous victims while she was in Nome’s hospital recovering from a suicide attempt. I tell them the story of the woman who says Poole raped her when she was nine, even as he carried on an affair with her mother, who eventually committed suicide. The victim who said Poole’s own mother—Luella—caught him masturbating in front of young girls and did nothing to stop it. And then I say that Poole wasn’t the only one, that attorneys know of 345 cases of molestation in Alaska by twenty-eight different pedophile priests, brothers, deacons, and others associated with the church.

Sometimes their reaction is visceral. I see them cringe. I tell them I think the church should not only pay every victim of abuse, but should also be charged with racketeering for decades of lying and abetting some of the worst criminals in the country. I once covered the Mafia for my newspaper, but the church was far worse. Gangsters never pretended to be anything other than gangsters.

Poole was never criminally prosecuted because of the statute of limitations, but the church and its insurers paid more than $100 million in settlements to Alaskan victims. Until recently, he was living comfortably in Spokane, supposedly under twenty-four-hour supervision. I sometimes fantasized about knocking on his door and sucker-punching him, for all those victims. And for making us all walk away from the church we were trying so hard to be part of.

Last spring, Poole died. I’m still angry at him. I’ve tried throwing my anger out, like Frances described on the beautiful banks of the Andreafsky River. But when I do, it just keeps bouncing back.