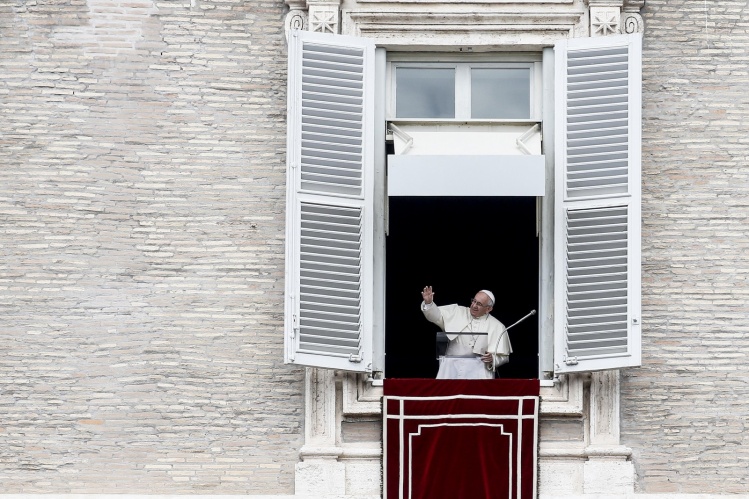 Late in A Portrait of the Artist as a Young Man, Stephen Dedalus is asked whether, having drifted from his childhood Catholic faith, he intends to become a Protestant. “What kind of liberation would that be,” Stephen answers, “to forsake an absurdity which is logical and coherent and to embrace one which is illogical and incoherent?”

I first read this Joycean line—which is, of course, somewhat unfair to both its targets—around the time that I became a Catholic, more than two decades ago now. But it’s only recently that I’ve appreciated it as more than an entertaining bit of lapsed-Catholic chauvinism.

In part, I’ve appreciated its relevance for Catholics dealing with the moral failures of their church’s leaders, with the What are we doing here? question that rears its head with every new round of sex-abuse revelations: we’re here because we still think the truth is far more likely to be here than elsewhere, however obscured and darkened by corruption it may seem.

But it also has a more specific application to the position of Pope Francis’s conservative critics in this turbulent pontificate. Again and again, in debates about the Francis era, conservative angst over the possible degradation of doctrine has met a serene rejoinder from the pope’s admirers that all is well and no schism can possibly come, because as faithful Catholics the pope’s critics don’t really have anywhere to go.

Which is, speaking as one of those critics, a pretty reasonable point, with which any serious conservative self-examination must contend. And especially the self-examination of a convert like myself, for whom the church’s claims to continuity and coherence were a reason (not the reason in my case, since I was a teenager following my parents and my conversion was less intellectualized than some, but still part of the story) to leave Protestantism behind.

If continuity and coherence are reasons to submit—or attempt to submit, with many doubts and fallings-short—to the authority of Rome, is apparent discontinuity a reason to look elsewhere? And if so, where would one possibly go next?

The answer in my case is nowhere; I will not be going, I have made my last conversion, the church is stuck with me until the end. And my reasons, when I reflect on them, are effectively Dedalusian.

I will not be going, I have made my last conversion, the church is stuck with me until the end.
sharetweet

By this I mean that conservative Catholics are being asked by Francis and his appointees and admirers to accept—however tacitly and ambiguously and provisionally for now—a revision of church teachings that makes the church’s claims to authority and consistency seem less compelling and coherent and even possibly absurd. But at the same time any kind of exit strategy or alternative seems even more illogical and incoherent, more self-contradictory, than remaining with Peter even when he seems to be flirting with grave error.

Or to rewrite Joyce’s young artist’s line: What kind of fidelity would that be, to forsake a synthesis whose logic and coherence are endangered and to embrace one that seems incoherent from the start?

Of course, one might discern a coherent reason to leave the Catholic Church if a stern Calvinist soteriology suddenly became intellectually compelling, or an Anabaptist ecclesiology, or for that matter simple atheism. But for a conservative Catholic trying to assimilate Francis-era developments to a pre-Francis worldview rather than abandoning it entirely, there are really only two possible arguments for jumping ship.

The first would say, well, if the magisterium can reverse itself so easily from pope to pope, I should downgrade my confidence in the binding quality of papal rulings, assume that the official definition of infallibility was mistaken or misinterpreted, and accept something closer to the Orthodox understanding of Rome’s primacy, with sharp limits on the authority ascribed to pretty much all teaching issued by popes since the Great Schism. (Indeed, it’s even possible that Francis wants to encourage something like this downgrading, as a means to reunion with the church’s eastern lung.)

But suppose one did accept this understanding: Would that really be a case for becoming Orthodox? Not so far as I can see. First, it seems ridiculous to leave Catholicism over a pope’s evacuation of marital indissolubility…and then join a church that conducted a more explicit evacuation many centuries ago. Second, it seems equally absurd to accept an ecclesial model that emphasizes a more national and regional model of authority—and then rush to submit oneself to the Patriarch of Moscow or Constantinople, when the Patriarch of the West is clearly the relevant authority for most Catholics (even if his authority might be more limited than has traditionally been claimed). Swimming the Bosphorus might possibly make sense, under this analysis, for a Francis critic who was also planning to permanently decamp for Istanbul or Saint Petersburg. (Given Orthodoxy’s ongoing Ukrainian disputes, someone moving to Kiev would only multiply his dilemmas.) But in the West and indeed in most parts of the globe, even under an Orthodox model of Christendom the church of Rome would still be that critic’s natural home.

Then there is a second possible move: a traditionalist exile of the sort embodied by the Society of Saint Pius X, which professes its loyalty to every pope while declining to be actually governed by the papacy. After all, the argument might go, if you are already choosing the coherence of tradition over the seeming incoherence of a given pope or popes, why not join a community in which that choice has been made explicit, resistance to liberalization is the organizing principle, and an ambiguous sort of schism is accepted as a divinely ordered test?

I think liberalizers underestimate the potential power of this logic; and if there is an eventual schism on the church’s theological right, it will happen roughly along these lines: first with the concomitant liberalization of the official church and a stronger theological and liturgical traditionalist turn among conservatives (a combination already visible under Francis), and then with some ill-advised attempt by Rome to bring these traditionalists to heel (of the sort already deployed against some traditionalist orders under Francis), which in turn inspires a portion of the church’s priests and bishops, the next-generation and possibly more intense versions of Raymond Burke and Robert Sarah, to exercise a Lefebvre option and effectively decamp.

But if this is imaginable, I still can’t imagine joining the decampers—again, because the don’t-call-it-a-schism maneuver also seems to answer absurdity with absurdity, addressing the problem of a tacitly Protestantized Catholicism with a different kind of Protestantization. By entering into this kind of internal exile you don’t simply remain with Catholic tradition; you also place yourself under the authority of whoever leads the exiled church. And even for a traditionalist (let alone a confused conservative like myself), the tradition is not self-interpreting: if it were, Cardinal Burke and Bernard Fellay would have no differences between them, and the expulsion of Bishop Richard Williamson from the SSPX would not have become necessary.

To submit oneself in that way, whether to a Fellay or any other future exile, is ultimately to gamble almost the way megachurches gamble during their successions, without any “tu es petrus” warrant to grant confidence in the result. My own presumption is already considerable, but it’s not strong enough for that. Only if such a choice were forced—in a disputed papal election or a collapsed ecumenical council—could I imagine making it, because only then would it seem reasonable to imagine that the same Christ who chose Peter was asking us to choose as well.

Absent such still-unlikely developments, it seems more reasonable and faithful to remain—staying on a boat taking on water rather than casting oneself at some likely-looking flotsam, combining disputation with submission until time and providence either mysteriously vindicate Francis’s critics or prove, through a slow accretion of evidence, that we were simply wrong.

That this sets up a strange tension within conservative Catholicism is obvious already. Under Francis you have not only journalists and theologians lodging criticisms but high prelates using apocalyptic language and even making reference to the final tribulation of the church. But at the same time that rhetoric has no accompanying action that matches its apparent gravity, because no such action seems available.

In this tension it’s quite reasonable for more liberal Catholics to see the provisional vindication of their premises—evidence of how the petrine charism of unity and the operation of the Holy Spirit will gradually bring the recalcitrant along.

But as Francis likes to remind us, we have a God of surprises—and our remaining on the barque with Peter also keeps open the possibility that tomorrow’s liberals will come to wish that today’s conservatives had leaped overboard.