A dispatch from the listening phase of the synod
By Gabriella Wilke
Synodality
U.S. Catholicism
Women in the Church 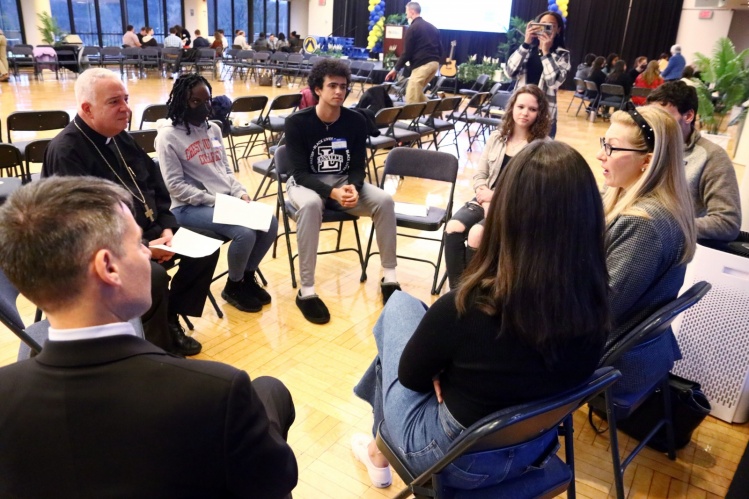 It’s the Sunday after St. Patrick’s Day, and I’m on the wooded campus of Saint John’s University in Collegeville, Minnesota, to learn how to listen. The all-male Saint John’s has a partner school six miles away, the women’s College of Saint Benedict. I’d been up here a few weeks before to walk around St. Benedict’s “brother campus” with a girlfriend. We both had some loose ties to the place but still felt like outsiders visiting as we walked around on our own, lamenting the structural inequalities and other issues that can make it hard to see ourselves remaining part of the Church.

But today is different. I’ve come to Saint John’s for a reason. The call came from the Central Minnesota Catholic: “Pope Francis Wants YOU! To be a Listener for the Synod.” When I arrive, a student at the front desk invites me to walk through the center door of St. John’s Great Hall, a hulking old Romanesque church that, like a tomb, seals out the cold air and muffles my winter boots. I proceed along the grand and empty corridor, thinking to myself that in this building’s former life, I’d be walking straight through to the tabernacle.

In the oversized meeting room I find a dozen or so others who have also responded to the call. Soda and cookies have been set out on a side table—something to keep us energized through the long afternoon to come. Deb, a hospital chaplain dressed in purple tie-dye, invites me to join her table. Already there is a soft-spoken man in a coat and cap named Herman, who I’d later learn is a staff writer for a local farming paper.

Also among us is theologian and ecclesiologist Kristin Colberg, a member of the U.S. synod commission. She was in Rome in October 2021 when the synod opened, and she contextualizes our gathering by emphasizing that this is a radical process of listening together. She tells us that Pope Francis wants everyone involved in a Church of motion and emotion. That the synod is about closeness, and bringing us onto the same path. In her telling, Pope Francis says: Think of the ecclesiology of Vatican II. How do we hold ourselves accountable for living out Vatican II? What do we need in the Church to be the most authentic version of ourselves?

When we do introductions and talk about why we’re here, I’m the first to answer. But I make the mistake of speaking politically. “I think I can reach some on the margins,” I say. I’m thinking of the people in my life who’ve become disaffected with the Church—those who’ve been made to feel less-than because they are women, divorced, gay, other. Someone else seems to respond in kind, mentioning Bishop Barron and Eucharistic coherence. To be a better listener, I write down these reminders:

Colberg, as a teacher of Church history, also imparts this lesson: each council is both a beginning and an ending, raising new questions that are to be answered and lived out in the Church. Here’s how we’re living out the synod: each of us signed up to be one-to-one listeners, but first we’ll practice in small groups. We’re invited to practice with people we don’t know, and yet Jim, a deacon and the only face familiar to me, joins my table from the other side of the room. Herman and Deb join in too, as does Vince—the one who mentioned Barron. We go around in a circle, listening to the person to our right, speaking to the person on our left. It’s a human effort. I fumble with my notes as I try to take in what Herman is saying. And even though I can see Jim’s earnest effort at listening as I speak to him, I still don’t quite feel heard.

During a break, Jim and Vince bond over the message they grew up in the Church with: pray, pay, obey. For so long, church has only been a matter of obligation. I think about this relationship to obligation. Some of the people closest to me feel caged by it, or belittled by its demands. Obligation is a difficult thing to embrace. Jim turns to me and asks me to weigh in on women priests. It’s not an issue I want to weigh in on, but I tell him that when it comes to decision-making, it matters who’s at the table.

There’s a very good chance the Church will mess this up.
sharetweet

Soon, Herman begins to open up. He tells me he was approaching the age at which he could become an altar server when the Second Vatican Council started. The council delayed his training. His teacher, Sr. Benedict, told him there was no way the Mass would be said in English when it had been in Latin since the time of Jesus on the cross. The bishops are all talk, she told him. But then, of course, he lived through what followed, the transition from Latin-only to Latin and English and finally to English alone. I think about that liminal period of Mass in dual languages. Is that where transformation happens?

We pair off in different corners of the room to practice a one-to-one conversation. I choose a seat by a window, and look up to see Deb has followed me there. We begin with the first prompt: Share a dream, vision, or hope you have for the Church. I offer an image. In the parish I grew up in, the Christmas Eve Mass is a bright spectacle. There are banners and trumpets and a young couple dressed as the Holy Family; three kings process down the aisle atop camels (in fact, dads elaborately costumed as camels). It’s the only day of the year the church is so crowded. I missed it this year, but received pictures from two close friends who were there, sitting with their families in the same sections they sit in every Christmas Eve. What brings them there now is a sense of family obligation—to use that word. But I wish, someday, we could all bring ourselves, our whole selves, there. To be at ease in this Church as women, divorced, gay, other.

When we reconvene after the one-to-ones, people begin to raise some of their concerns about the synod. What happens after the listening phase? Whose voices will make it into the report? What, if anything, will change? One woman expresses what I wanted to share at the beginning, my unspoken thought: There’s a very good chance the Church will mess this up. And yet. We still believe in the possibility of this moment. The possibility that this can lead to something transformative.

After the training, I wander around the campus for a bit. It’s quiet, and hardly anyone is around. A student is giving his parents a tour, talking to them in Spanish. Two men from my session walk through the monastic gardens, despite a sign reading “Private, do not enter.” I go down to Lake Sagatagan, frozen over and covered in snow, and take in the view. It’s open and empty, white on gray.

Just up and across the road is the cemetery my grandparents will rest in. My grandfather is a university alum—a Johnny—and my grandmother worked for many years in the St. Ben’s business office. My grandma was emphatic about this gravesite view, how beautiful it is out here, how nice to be on a lake. For now, we can laugh about it: “Mom, you won’t care about the view when you’re dead,” says my mother. But looking over the frozen lake in that dead season of March, I can see what my grandmother did for us. It’s a gift for us visiting outsiders. It tells me and my siblings and all the rest of my family who don’t belong to this place, a place so special to my grandparents, that we are in fact part of it. That this connection, like the synod itself, can be lived out in unexpected ways. After all, we have a view.