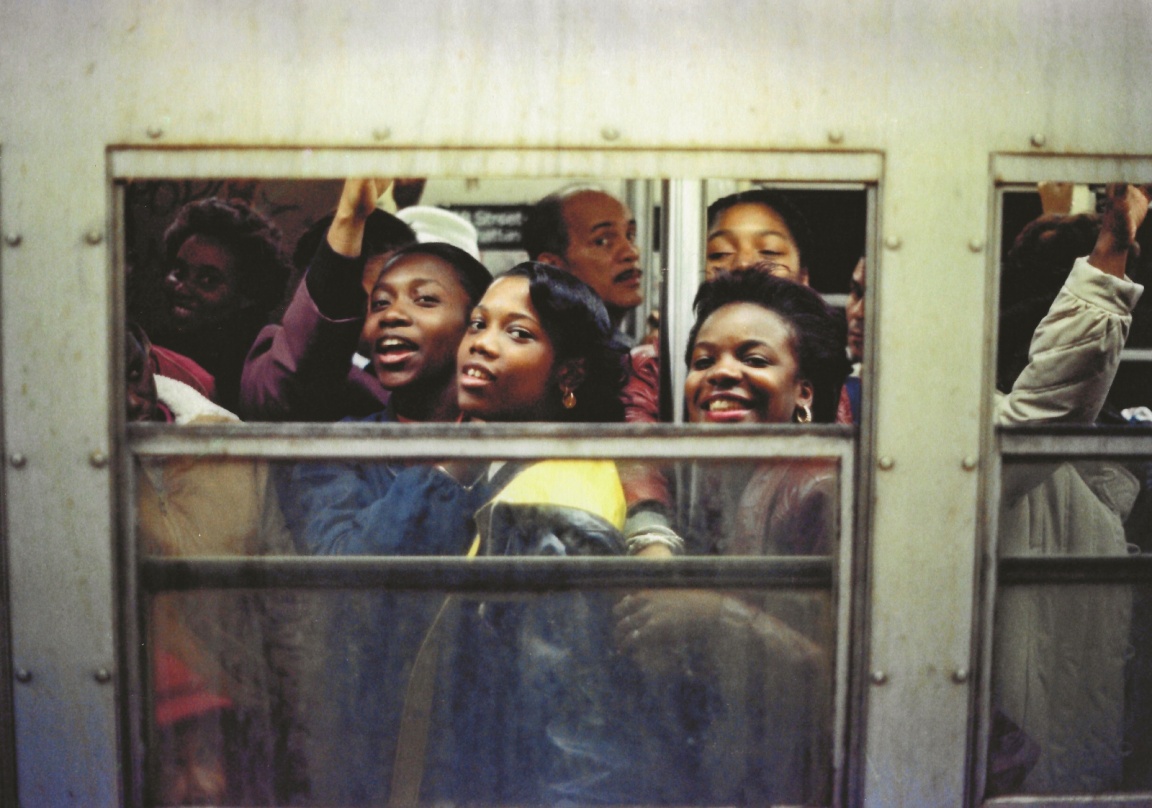 Rush Hour 1980 (Courtesy of The Bronx Museum of the Arts)

Jamel Shabazz: Eyes on the Street
By Clifford Thompson
Arts

The first thing you see when you enter the exhibit Jamel Shabazz: Eyes on the Street, at the Bronx Museum of the Arts through September 4, is a video of the African-American photographer being interviewed in 2007 by members of the museum’s Teen Council. You may be tempted to skip the video and go straight to the photographs, but there is a payoff for getting comfortable on the bench first. What this caring, charismatic man says about his work provides context for understanding it, perhaps nothing more so than his observation that humility is necessary for what he does. It may be his own humility that enables him to subtly document, even when photographing the most extroverted of his subjects, the varying degrees of humility that life in New York City—maybe life anywhere—forces most of us to adopt.

Eyes on the Street comprises color as well as black-and-white photographs taken on the streets and subways of New York’s five boroughs between 1980 and 2020. Black, Latino, and white people, especially Black people, not necessarily poor but decidedly not rich, gaze at us, or at one another, or at things we can’t see. Each subject is the center of the photograph but not of the world in which the picture is taken. In one photo of an outdoor basketball court, two bare-chested young men stand side by side with arms crossed, one smiling, the other looking defiant, both regarding us; meanwhile, some in the distance look at us while others play ball, oblivious to the viewer as well as to the foregrounded figures. Another photo shows a young man sitting on a stoop with only his head and hands visible, the rest of him blocked from view by an enormous poster-portrait of Malcolm X. In yet another, three girls are seen through the window of a subway train, standing, two smiling, the third—in the center—wearing an unreadable expression, while behind them all a balding, mustached man gazes sideways at us, unimpressed. In still another, a boy with close-cropped hair, wearing a bowtie and a jacket several sizes too large, looks into the camera with a serious expression and salutes as other, blurred figures stroll on the sidewalk behind him. In all the pictures, people act out the story of being themselves, in the brief moments before the camera moves on to someone or something else.

Shabazz, who was born in Brooklyn in 1960, was a graffiti artist before he began taking photographs at fifteen, inspired by a book on black-and-white photography that his father owned. His father did not think much of Shabazz’s photographs but showed him techniques related to light, composition, and developing film. (Using his camera, he says, helped him overcome a stutter.) At sixteen Shabazz dropped out of high school (he later obtained a G.E.D.); soon he joined the military, returning home at age twenty. As he recalls in the Teen Council interview, he was “impacted” by the sight of prostitutes in his neighborhood and talked to them to learn their stories. Empathetic by nature, he was saddened by the gang violence around him, since the participants were people he knew well, sometimes members of rival gangs—who, he came to realize, often refrained from attacking one another out of respect for Shabazz. He worked sixteen-hour days at the jail at Rikers Island, getting to know and like the detainees, for whom he obtained books and arranged contact with lawyers; concerned about the young people in his neighborhood, he talked to them in his off-hours about avoiding drugs and prison, while they, in turn, told him about what was going on in the streets. (A refrain in his interview is his sadness over what drugs, particularly crack, have done to neighborhoods in New York. “Crack made people hard,” he says.)

It may be his own humility that enables him to subtly document, even when photographing the most extroverted of his subjects, the varying degrees of humility that life in New York City—maybe life anywhere—forces most of us to adopt.
sharetweet

Meanwhile, Shabazz took his camera everywhere, snapping pictures of people he encountered. His work began appearing in The Source, the hip-hop magazine founded in 1988. By the time Shabazz approached the book publisher powerHouse with his images, they already knew who he was. They agreed to publish his first book of photographs, Back in the Days (2001), which quickly sold out its first run. Four other books followed. Since then, Shabazz’s work has appeared in more than two dozen solo shows and has been seen internationally. 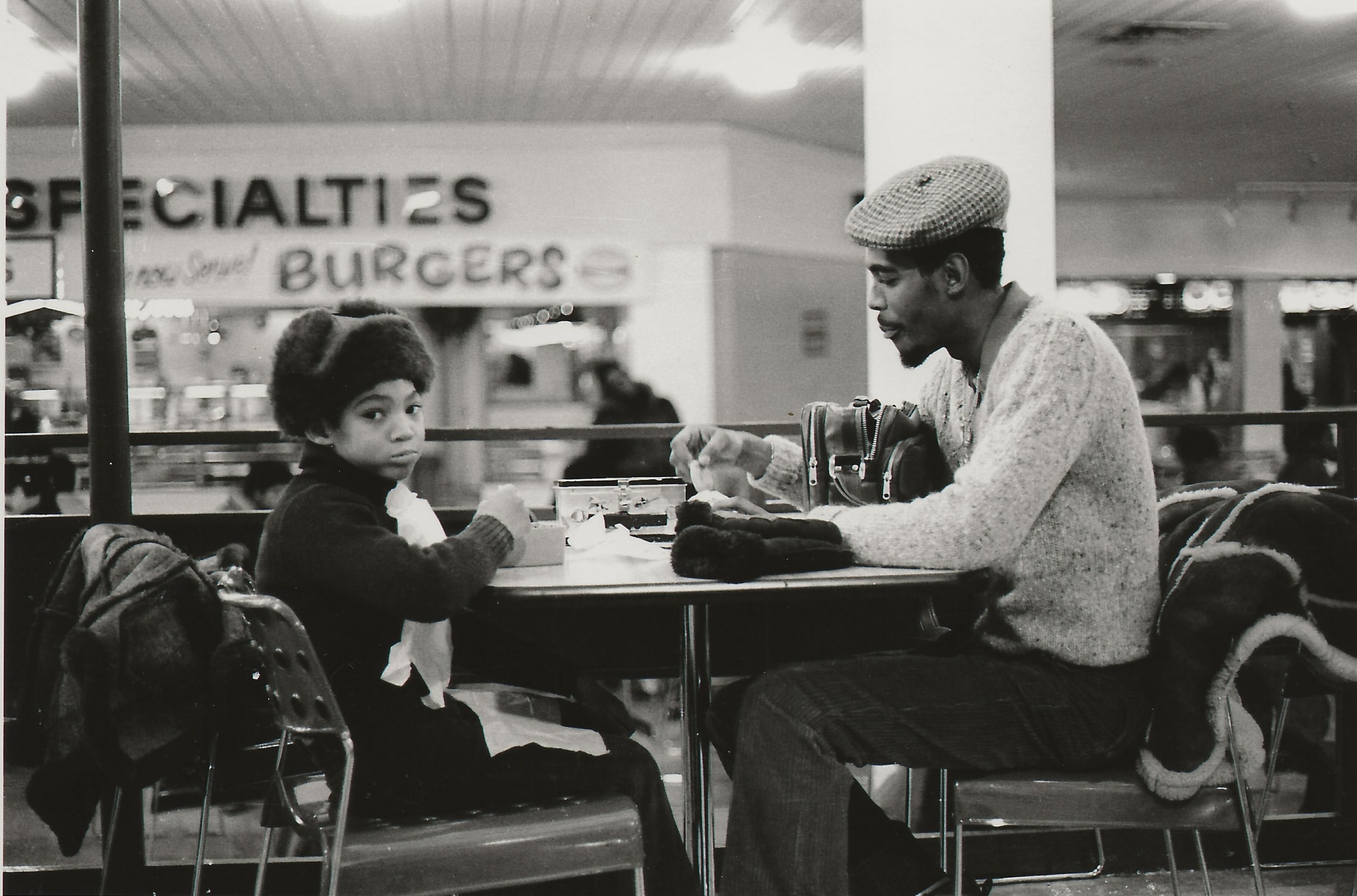 Son and Father (Courtesy of The Bronx Museum of the Arts)

The photos of people in Eyes on the Street add up to a collective portrait of New York over the decades. Flared pants, bygone makes of cars photographed at intersections, long-gone storefronts, and Afros puffing out from under police hats abound. Speaking of intersections: in shots crowded with people, cars, and buses, some vehicles are cut off, suggesting that activity extends beyond the edges of the pictures—that there is so much more of the humble slice of life we are seeing now. Speaking of police: in one image, four officers, three men and one woman, smile at the camera while standing in front of what appears to be an abandoned building; the building is covered in graffiti and signs that read “We Love Our Youth!” and “Jobs Not Jails.” And speaking of graffiti: in the video interview, Shabazz lamented that he had not shot more images of graffiti-covered subway trains, thinking they would “be around forever,” but there are quite a few such images on display, with the graffiti serving as backdrop to the glimpses of humanity at the center. In one, two young women wearing matching blue blouses and white pants—friends? sisters? fraternal twins?—hold onto a subway pole. In another, a small boy rests his head on the thigh of a somewhat bigger boy. The tenderness of that scene can be found elsewhere in the exhibit. In one black-and-white photo, a young boy in a white dress shirt and jeans holds a trombone vertically, the instrument reaching his chest; surrounded by adults, gazing not at us but into the distance, he may be looking for someone—anyone—he knows. 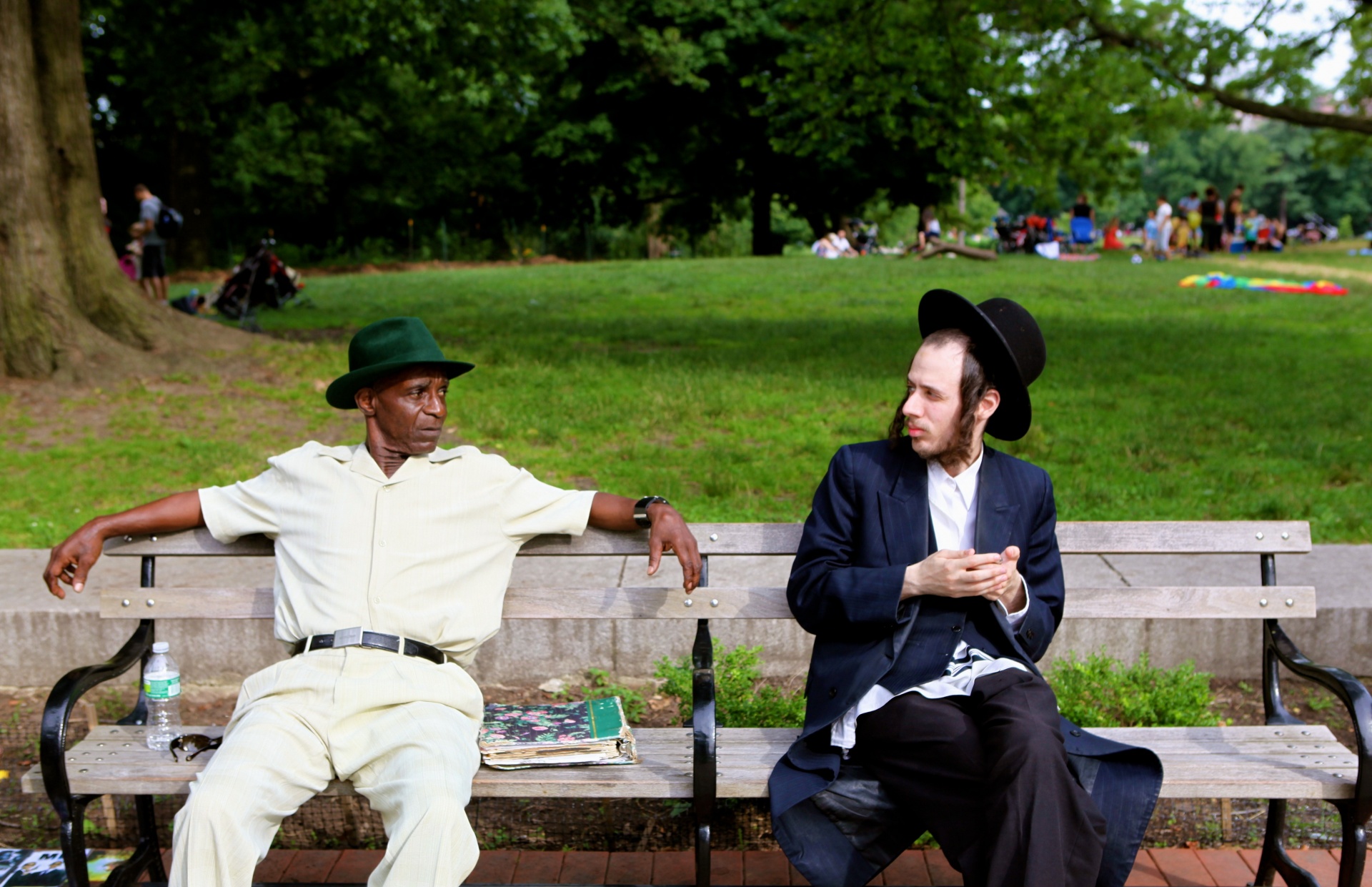 One color photo in Eyes on the Street stands out as the funniest—or, depending on one’s point of view, the saddest, or the most hopeful, or poignant. Two men sit on a wooden park bench, separated by a black metal armrest. The man on the left, who is Black and dressed in white clothing, has settled comfortably on his half of the bench, with his arms spread on the top, a notebook sitting at his left, a bottle of water and a pair of sunglasses on his right. The man on the right, who is Hasidic, wears a white shirt and dark blue jacket and pants; he is perhaps leaning away from the other man just a bit, and he appears to be cupping something, we cannot see what, in his hands. Both men wear hats with brims. On the expanse of grass behind them, the shadow cast by a tree appears to connect the hats. And each man is looking at the other, unabashedly: the Black man’s brow is wrinkled in skepticism, and the Hasidic man’s eyes are narrowed in wariness. Neither man seems to fully understand, or trust, the presence of the other. But in this frozen image, they keep looking; if they do so long enough, just maybe they will see.