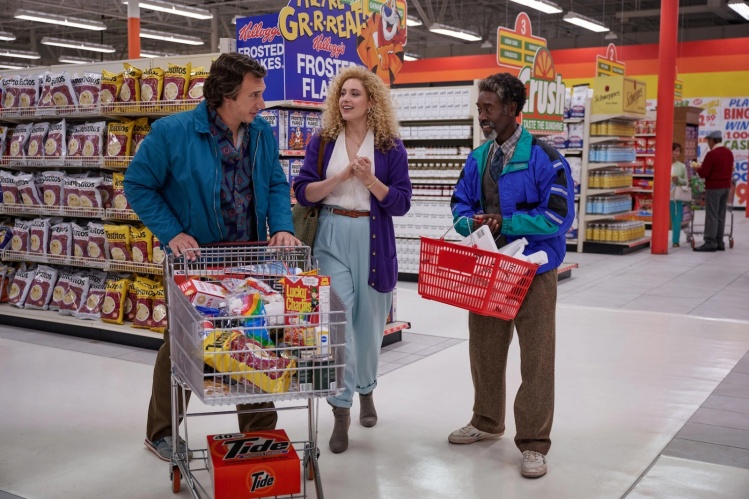 Professor Jack Gladney, the narrator of Don DeLillo’s 1985 novel, White Noise, yearns for stasis. “Let’s enjoy these aimless days while we can,” he tells himself, “fearing some kind of deft acceleration.” At another point Gladney all but prays, “Let the seasons drift. Do not advance the action according to a plan.” The novel does not just explore resistance to change and the fear of death; it is arguably about being an uninvolved spectator, a consumer, part of a crowd. Even when an environmental disaster upends the Gladney family’s comfortable life in a well-off university town, they remain detached observers. DeLillo’s characters exhibit and reflect on the ways vast, unknowable systems of production and information proliferate and place the individual at an often confusing—though in some ways commanding—distance from reality. Death looms over this spectatorship as the one reality that can’t be observed from a pleasant distance.

These themes present some significant challenges to the filmmaker attempting to adapt White Noise for the screen. In how-to books, screenwriting experts write endlessly of a movie’s need for conflict, tension, and suspense. French director François Truffaut wrote that “the art of creating suspense is also the art of involving the audience, so that the viewer is actually a participant in the film.” But how to involve the audience when the story is about being an audience? How, more specifically, to enliven the characters’ detachment? How to dramatize the passive consumption of information and commodities? And how to create real drama out of dialogue that often seems a mouthpiece for DeLillo’s own philosophical musings on things like supermarket shopping, tourism, and doctors’ visits?

Noah Baumbach seems in many ways an unlikely candidate for the job. Although his films have certainly reached philosophical heights at points, they usually start on the ground, in the muck of real human emotion: the childhood confusion and loss of his breakthrough film, The Squid and the Whale; the rudderless malaise of post-graduate adulthood in Kicking and Screaming; the midlife depression and shame of Greenberg. His scenarios are typically drawn from real life (if Park Slope qualifies as real life) and his films succeed most when the particulars—of character, conversation, or conflict—flash up into recognizable universals, not when a philosophical concept is embedded in some suitably evocative fiction. Not everyone knows what it’s like to have a father like Dustin Hoffman’s character in The Meyerowitz Stories, who takes out frustrations about a middling artistic career on long-suffering adult children, but most of us know what it’s like to deal with self-involved relatives and the damage such people do without knowing it.

Although his films have certainly reached philosophical heights at points, they usually start on the ground, in the muck of real human emotion.
sharetweet

Baumbach is aware that White Noise is different from the kind of story he usually tells; it exists, as he put it in an interview with the New York Times, in its own “elevated reality.” DeLillo’s novel derives its power from the fact that its characters are somewhat abstract—and abstracted. They are more observant, detached, and reflective than real people, more like novelists themselves than conventional characters. Take, for example, the professors in the university's “popular culture department,” which shares a building with Gladney’s “Hitler studies,” a subject he has put on the map. These professors, ex–New Yorkers who’ve emigrated to the unspecified Midwestern university, are effectively experts in their own childhoods. They take up questions such as the meaning of the American movie car crash, generic brands at the grocery stores, and where they were when James Dean died. As visiting professor and Gladney’s friend, Murray Jay Siskind, puts it, “I understand the music, I understand the movies, I even see how comic books can tell us things. But there are full professors in this place who read nothing but cereal boxes.” Gladney himself has managed to turn Adolf Hitler into a kind of pop-culture object. Hitler is studied not as a historical figure but as a cultural phenomenon who’s managed to produce a certain kind of timeless aura that floats free of the actually existing dictator.

Interestingly, the most significant and famous pop cultural artifact in the book—the “most photographed barn in America”—goes unphotographed in Baumbach’s adaptation, even though the movie is generally quite faithful to the book, in content if not in tone. When, in the book, Siskind and Gladney go to visit the nearby barn, Siskind concludes that it has become impossible to see it. The signs leading up to the site, the tourists setting up their tripods, the postcards sold in a booth next to the barn—all these conspire to lend the site an aura that effectively obscures the real barn even when one is looking right at it. DeLillo reinforces this assessment by never actually describing the barn. In Baumbach’s medium, of course, such an omission—filming the scene without filming the barn—would have been much more glaring, which perhaps explains why the episode is cut. “We’re not here to capture an image,” Siskind says, “we’re here to maintain one.... We can’t get outside the aura.”

The barn episode distills a number of the novel’s themes and sets the stage for its second section, which concerns what the media eventually decide to dub “The Airborne Toxic Event.” A poisonous gas, Nyodene D., is released into the air after a train accident near the Gladneys’ home. Eventually the town is evacuated and the Gladneys pile into their rusted station wagon to join a comical mass flight, first to an abandoned Boy Scout camp and then to an abandoned karate studio. On the way, Jack is exposed to Nyodene D. when he leaves the car to fill up the gas tank.

Here too, there is a distinct sense that even in the midst of a pressing and potentially life-threatening event, the characters can’t quite get outside the aura. On their way from the boy scout camp to the karate studio, Jack attempts a shortcut through the woods and accidentally fords a creek in the station wagon as the toxic cloud looms overhead. Still, the children in the backseat can’t seem to focus on the disaster. The eldest son, Heinrich, proposes a trivia contest: “I’ll give anybody in this car five dollars... if you can tell me whether more people died building the pyramids in Egypt or building the Great Wall of China.” The Airborne Toxic Event is treated as if it’s just another channel on TV, of interest only when there’s nothing better on.

Baumbach films most of this straightforwardly, as a conventional Hollywood disaster sequence, albeit one with DeLillo’s satirical details and clipped, cold dialogue. The result is incongruous.
sharetweet

In this part of the film, it becomes clearer why Baumbach took on the project: the Airborne Toxic Event is an analogue for Covid. In both cases, people don surgical masks to protect themselves; misinformation and unfounded speculation about the disaster proliferate; things go “back to normal” without ever quite being like they were before. And, as with Covid, the real disaster is rarely confronted directly but almost entirely superseded by representations of it.

For example, the radio reports that Nyodene D. causes not nausea—as was initially thought—but heart palpitations and déjà vu. So, when Jack’s daughter Denise makes a break for the bathroom to throw up, his son Heinrich tells her she’s displaying “outdated symptoms.” The team assisting at the evacuation site is actually part of a simulated evacuation program (SIMUVAC), but instead of admitting that they’ve been thrown into the real thing, the staff insist that they’re actually using the real thing as a model for future simulations. When they run the data on Jack’s exposure, it comes back “pulsing stars,” and Jack is told, “You are the sum total of your data. No man escapes that.” One is reminded of our now much more pervasive and inescapable “personal data”—the digital representations that seem to determine our fate more than our lived reality does—as well as of the way the reality of Covid quickly became swamped beneath its senseless role in a preexisting culture war that played out on cable news and Twitter.

Baumbach films most of this straightforwardly, as a conventional Hollywood disaster sequence, albeit one with DeLillo’s satirical details and clipped, cold dialogue. The result is incongruous. Baumbach’s instincts routinely pull the film back down from DeLillo’s “elevated reality” to Baumbach’s own very human one. The actors often seem caught between these two worlds. You can almost see Adam Driver, who plays Jack Gladney, toggling back and forth between acting as an emblem of postmodern alienation and acting as a benign, concerned father. Unable to fully inhabit DeLillo’s world, the actors often deliver lines from the novel as if they were simply reading from it. In the novel, the sweeping ideas and absurd plot reinforce one another; in Baumbach’s film, they clash. At moments, it feels as if Baumbach expects us to take the disaster more seriously than the characters do.

In the novel, the sweeping ideas and absurd plot reinforce one another; in Baumbach’s film, they clash.
sharetweet

This problem becomes even more pronounced in the film’s third section, which concerns the efforts of Gladney’s wife, Babette (Greta Gerwig), to cure her fear of death by participating in a trial for an experimental drug called Dylar. The pill has significant side effects, including memory loss and an inability to distinguish words from the objects they designate. As a result, she has to sleep with the drug’s developer, Willie Mink, in order to get her hands on it. Jack eventually uncovers these facts and resolves to kill Mink, in part out of a misguided sense that this will somehow cure his own fear of death. In these scenes, Baumbach’s desire to realistically render the emotional baggage between the couple sits uneasily with, and even distorts, DeLillo’s satirical intent. Babette and Jack can conceive of death only as something like white noise, the sound the TV makes when the image isn’t coming through.

When Jack discovers at the karate studio that his exposure to Nyodene D. may end up killing him, he tries to present himself as unperturbed to the other evacuees. “Trying to create a picture of an impassive man,” he says, “seemed the only way to neutralize events.” The line echoes the way that, in White Noise, reality is consistently neutralized or rendered irrelevant by various forms of media. Unfortunately, it also suggests the way DeLillo’s novel is neutralized by Baumbach’s own picture.