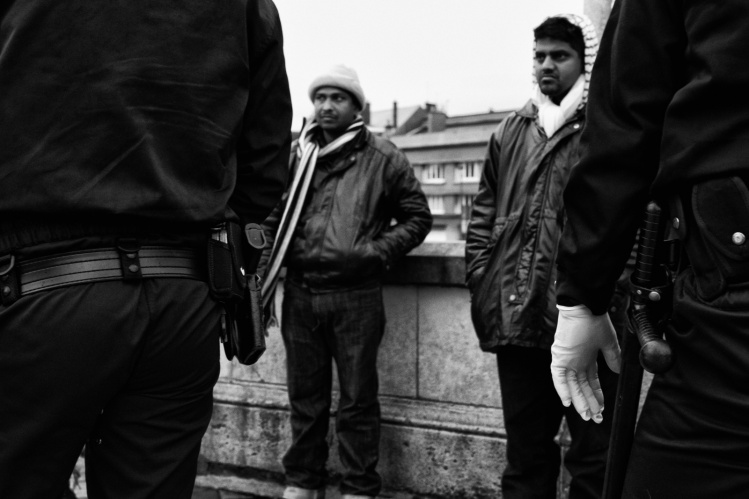 “The democratic social state,” Alexis de Tocqueville wrote, “comprises those like oneself.” The history of democratic society has been shaped by the questions embedded in this deceptively simple remark: How much alike must we be in order for democracy to work? How much can or should be done to abolish the things that divide us, such as differences in education, status, or wealth? And what do we do about those sources of diversity that seem impossible to erase, such as differences in religion, ethnicity, or gender? Are there some groups so unlike ourselves that they will never be members of our democratic social state? Efforts to answer this final question have generated many of modernity’s bitterest and most destructive conflicts as some people struggled to exclude or restrict those “others” who they were convinced were too different to belong: Catholics, Jews, blacks, and many more. The main purpose of Douglas Murray’s book is to add some new groups to this long and unhappy roster.

“The civilization we know as Europe,” Murray writes in his introduction, “is in the process or committing suicide…as a result, by the end of the lifespans of most people currently alive, Europe will not be Europe and the peoples of Europe will have lost the only place in the world we had to call home.” There are, he argues, two main reasons for Europe’s imminent demise: first, mass immigration, “the replacement of large parts of the European populations by other people,” and second, the steady erosion of those values and commitments that once shaped Europe’s identity. “The world is coming into Europe at precisely the moment that Europe has lost sight of what it is.”

The Strange Death of Europe is an untidy book, filled with repetitions and digressions. The relationship between the two parts of Murray’s argument—the crisis of immigration and the erosion of European identity—is implied but not clearly defined or persuasively demonstrated. The book’s disparate pieces are not held together by evidence or analysis, but rather by the author’s incandescent anger and righteous indignation. He is angry at the hordes of outsiders who have entered Europe in the recent past, changing the appearance and texture of urban neighborhoods, importing alien values and foreign languages, threatening to reduce the native-born inhabitants to an embattled minority in their own country. He is indignant about those intellectual apostles of multiculturalism, whose shallow platitudes about the value of diversity mask the real problems created by mass immigration. And above all, he is angry and indignant about Europe’s political elites, people like Barbara Roche (we are told twice that she is Jewish), Tony Blair’s minister of Asylum and Immigration, who have persistently failed to protect their societies from an invasion of these aliens.

Most of Murray’s book is devoted to anecdotes that illustrate the criminal activities of recent migrants, Islam’s inherent intolerance, the fatuous hypocrisy of Europe’s political leaders, and decline of the European tradition’s core values. Murray writes with eloquent urgency; he has a journalist’s eye for dramatic incidents and a skillful debater’s ability to anticipate his opponent’s objections.

Many of the problems that Murray describes are real enough. Some immigrants have indeed committed violent crimes; political elites have not always been honest with themselves and their constituents about the scale and costs of immigration; there has been a precipitous decline in traditional values and practices, especially those tied to Christianity. The “sea of faith,” whose retreat Matthew Arnold lamented in the middle of the nineteenth century, continues to ebb, leaving some unwholesome flotsam on the cultural shore.

Nevertheless, it seems to me that Murray vastly overstates the depth and severity of the current crisis. Even if we accept much of Murray’s overheated assessment of the European condition, can we really say that Europe’s deathwatch has begun? The most troubled parts of the continent—Russia and Ukraine, for instance—do not suffer from either excessive immigration or a crisis of cultural identity. The support for radical nationalist movements in Western Europe has apparently peaked. Moderates prevailed in the most recent French and German elections. Brexit, which might be taken as evidence for Murray’s argument, seems to have produced buyer’s remorse among important sectors of the British public. Almost everywhere, Europeans live better—and longer—than at any other time in their history. In sum, while hardly without serious problems, most of Europe remains peaceful and prosperous enough to provide the basis for a good life for its inhabitants and to attract a substantial number of those seeking better opportunities for themselves or their children. The fact of mass immigration, while surely a source of dissension and difficulty, is also a clear sign of Europe’s enduring attraction and compelling strength. Europe is certainly changing—and not always for the better. But Europe, however we want to define that elusive concept, is not dying.

Europe, however we want to define that elusive concept, is not dying.
sharetweet

Like many unsatisfactory books on important subjects, Murray’s deficiencies point us toward what Europeans need to consider in order to confront the problems posed by immigration.

First of all, they need an accurate picture of the role of immigration in European society and politics.

Murray is right to criticize those who have downplayed or denied the problems caused by immigration, but his own pastiche of atrocity stories and under-analyzed statistics is not an adequate alternative. What is the record of social and cultural assimilation among immigrants? Which groups do better and why? Which societies—or local communities—have more success than others in dealing with these issues? How much of the current situation is a result of short-term crises—the civil war in Syria, for example—and how much to structural changes in the global economy?

Second, Europeans need a balanced assessment of the costs and benefits of the alternative ways of managing the problems of immigration. Here Murray is not much help. He is occasionally clear about what should have been done in the past, but has little to say about what to do now. One thing is certain: there are no cheap and easy solutions to the global problems of political unrest and economic inequality that are driving the massive movement of populations both within and across national boundaries. Some states have taken stern measures to keep the aliens out—Japan, for example, and to a lesser extent, Australia. Are these the models that Murray wants Europeans to follow? And if these stern measures are adopted, then Europeans must ask themselves just how much human misery and state-sponsored violence they are prepared to tolerate in order to seal their borders and preserve that European identity to which Murray seems so attached? Won’t the violent defense of Europe’s borders undermine European values every bit as much as the arrival of outsiders?

Finally, as Europeans seek to address these issues, they need to be aware of their strengths as well as their vulnerability. Overheated predictions of Europe’s demise undermine the confidence democracies need to prevail. Denying the existence of problems is a grave mistake, but so is the sense of inevitable decline that pervades Murray’s account. The fact is that, with all its problems, Europe in the second decade of the twenty-first century is still in far better shape than at any other time in its often-turbulent past. Among the questions one would like to ask Douglas Murray is, “At what moment in European history would you prefer to live?” It is well to remember that for most of this history, despite what Murray calls Europe’s “philosophically and historically deep foundations (the rule of law, ethics derived from the continent’s history and philosophy),” Europeans managed to do quite terrible things to one another and to non-Europeans around the world. They do significantly fewer of them now, in part because of the spread of those sentiments—“respect,” “tolerance,” and (most self-abnegating of all) “diversity”—which Murray views with undisguised contempt.

The Austrian critic Karl Kraus once called psychoanalysis “the disease of which it pretends to be the cure.” The same can be said of Douglas Murray’s book, which is a symptom rather than a diagnosis of Europe’s current discontents, an expression of the malaise that seems to have infected a number of people on both sides of the Atlantic. People who share Murray’s view of the world will no doubt applaud the eloquent conviction with which he expresses their fears and frustrations. But those who recognize that they have a responsibility to find ways of dealing with Europe’s very real difficulties will have to look elsewhere for inspiration and instruction.