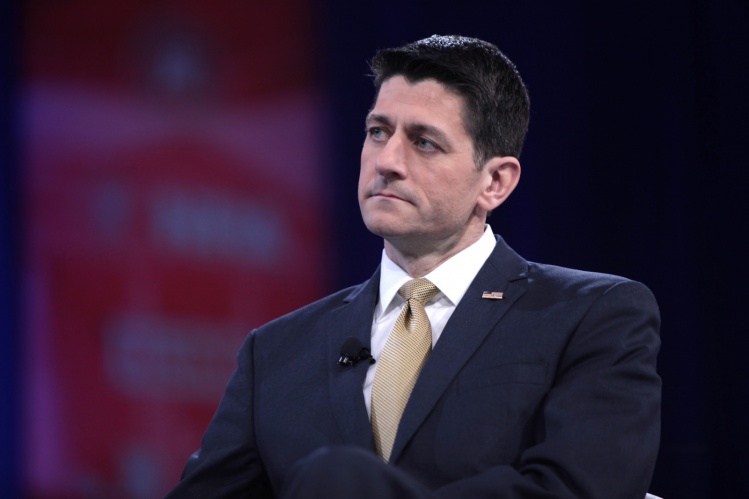 After Paul Ryan told an audience at Georgetown University that his legislative work conforms to Catholic social teaching “as best I can make of it,” he homed in on the importance of reducing the federal deficit. “The overarching threat to our whole society today is the exploding federal debt,” he said. “The Holy Father, Pope Benedict, has charged that governments, communities, and individuals running up high debt levels are `living at the expense of future generations’ and `living in untruth.’”

That was in 2012—a smart (if incomplete) retort to scholars, bishops, and commentators who argued that Ryan’s budget priorities ran afoul of Catholic social doctrine. But on October 25, House Republicans under the Wisconsin congressman’s leadership approved a budget blueprint that would bring about an alarming increase in federal debt to achieve tax cuts weighted to benefit the rich. Even in the annals of federal budgeting, an additional gap of $1.5 trillion or more over ten years is a lot of money. When the Senate put forth this plan, which the large majority of Ryan’s caucus rubber-stamped, the Congressional Budget Office warned that “the high and rising debt that is projected would have serious negative consequences for the budget and the nation.”

According to the budget office, annual federal spending on interest payments would increase sharply, especially since interest rates are expected to rise. “The likelihood of a fiscal crisis in the United States would increase,” it added, warning that interest rates could rise suddenly if investors were reluctant to finance government borrowing.

This is a budget plan designed for the short haul. The Republican leaders’ aim in both houses is to obscure their do-nothing, Know-Nothing records and retain majorities through the 2018 election.

This is a shift in the tax burden from rich to poor, likely to be aggravated by cuts in spending on social services. It’s distributive injustice.
sharetweet

To give Ryan the benefit of the doubt, there is still time to work out a more principled budget.  But, like just about every American politician who claims support in Catholic teaching, he needs to go beyond cherry-picking. He’ll need to consider factors beyond the deficit—especially distributive justice, which, as Pope Benedict wrote in his 2009 encyclical Caritas in veritate, the church has highlighted “unceasingly.”

The U.S. Conference of Catholic Bishops highlighted this facet of Catholic teaching in an October 25 letter on “moral criteria to assist Congress during deliberations on possible tax reform.” The letter said that the tax burden should not be shifted from the rich to the poor, and noted that the Republicans’ “Unified Framework for Fixing Our Broken Tax Code” states that a revised tax code “would be at least as progressive as the existing tax code.”

But according to the Tax Policy Center’s analysis of the “Unified Framework,” taxpayers in the top 1 percent (earning $730,000 or more a year) would see after-tax income increase 8.5 percent for 2018 while those in the bottom 95 percent would see increased income ranging from .5 percent to 1.2 percent. Half of the entire tax benefit would go to the top 1 percent.

This is a shift in the tax burden from rich to poor, likely to be aggravated by cuts in spending on social services. It’s distributive injustice.

Meanwhile, Ryan is trying to cover for the about-face he has done regarding the danger of budget deficits. He contends that tax cuts will bring about economic growth to fill the gap. That’s an old story, as Maya MacGuineas, president of the Committee for a Responsible Federal Budget, said after the House vote:

Tax cuts do not pay for themselves; they can create growth, but in the amount of tenths of percentage points, not whole percentage points. And they certainly cannot fill in trillions in lost revenue. Relying on growth projections that no independent forecaster says will happen isn’t the way to do tax reform.

The bishops’ moral criteria also include concern for the poor; strengthening families; “adequate revenue for the sake of the common good”; avoiding cuts to poverty programs to finance tax reform; and encouraging charitable giving.

I don’t know what Ryan would make of this list, which was part of a letter to all members of Congress from Bishop Frank Dewane of Venice, Fla., chairman of the bishops’ Committee on Domestic Justice and Human Development. But these are points the bishops have made time and again as they advance the notion that a budget is a moral document. Before the House vote on October 25, the bishops’ conference took the step of posting a notice online saying that “Christ teaches that we should find Him the `the least of these,’ (Matthew 25). Call on your Representatives to not forget the poor as they debate and vote on the budget resolution.”

This is well placed alarm since it’s likely that the first step of cementing tax cuts into the budget plan will be followed by a second step of cuts to non-defense spending. The Center on Budget and Policy Priorities says that this will likely lead less money for rental assistance, public housing, homelessness, Medicaid, Medicare, food stamps, and education.

Budgets have a way of quantifying complex political and moral priorities for all who care to see. This year, the public is paying more attention than usual to the process.  We’ll see how moral a moral document this is.

'What the Pope Is Doing Is a Miracle'