What Trump Has Wrought 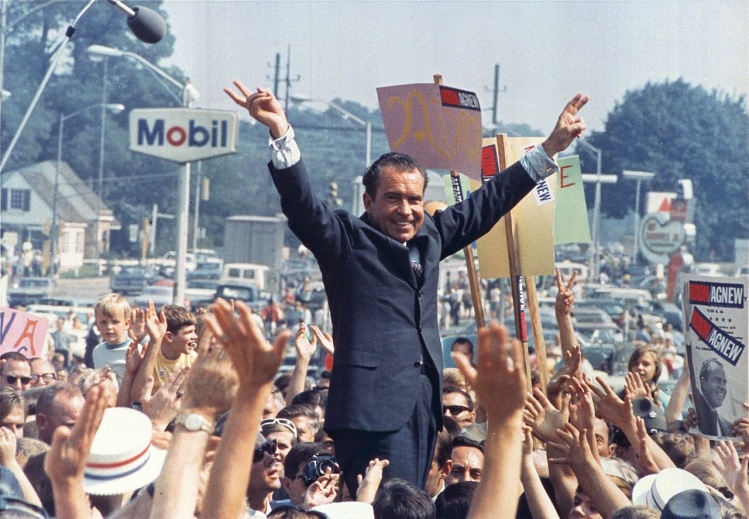 Richard M. Nixon, on the campaign trail in 1968 / Wikimedia Commons

I saw a clip of Richard Nixon on a PBS documentary the other night that got me thinking. You remember Nixon: he used to have a lock on the title of most disgraceful U.S. president. In this footage he was at a press conference, responding to initial news reports about the My Lai Massacre in Vietnam. He agreed that what had occurred there was rightly called a “massacre,” and he promised, “I am going to do everything I possibly can to see that all of the facts in this incident are brought to light and that those who are charged, if they are found guilty, are punished.” That wasn’t what Nixon went on to do, of course, but I wasn’t focused on his insincerity. I was struck instead by the basic competence of his answer. Our current president, I realized with dismay, could never hope to measure up.

It’s a sad day that finds us yearning for the leadership skills of Richard M. Nixon. But where Nixon was corrupt and petty in private, President Donald J. Trump is corrupt, petty, and cruel in plain sight—and never more obviously than when circumstances call for largeness of spirit. Trump seems to have no instinct for decency at all, even as a performance. Confronted with his history of misogynistic behavior and remarks, or asked what his administration plans to do about the post-election increase in anti-Semitic threats and vandalism, or pressed to condemn Vladimir Putin’s assassinations of political enemies, Trump sputters and grumbles that the questions are unfair, the reporters are dishonest, and by the way, did you notice he won the electoral college in a landslide? (He did not.) In a situation where any normal human, and certainly anyone in a position of leadership, ought to be able to strike a pose of proper seriousness, Trump seems both ignorant of what a decent leader would say and unable to see the benefit in at least pretending to be that leader. It is as impossible to imagine Trump handling the My Lai fallout competently as it is to imagine him sitting down to watch a PBS documentary about it.

This deficiency of Trump’s—his unerring knack for making everything worse whenever he opens his mouth—is not a post-inauguration surprise. It was evident throughout his campaign whenever he faced direct questioning, which is probably one reason he did so as seldom as possible. When evasion didn’t work, Trump’s apologists and enablers tried to spin his crudeness as an asset. “He’s not a polished politician,” Mike Pence protested during the vice-presidential debate with Tim Kaine. “You know, things don’t always come out exactly the way he means them”—as though Trump’s good intentions were regrettably obscured by his clumsy tongue, when in fact his words made headlines precisely because they revealed his startling lack of character and integrity. Even after audio leaked of Trump describing, in vivid terms, his penchant for sexual assault, his surrogate (and former campaign manager) Corey Lewandowski said it showed that Trump “doesn’t measure every word. He speaks from the heart.” And what a heart it is.

Trump seems to have no instinct for decency at all, even as a performance
sharetweet

People have a right to be cynical about smooth-talking candidates. “Polished politician” functions as a slur for a reason. We know Nixon’s po-faced expression of horror and determination to get at the truth about My Lai didn’t actually mean he planned to do the right thing. But Trump proves that the alternative to smooth talk is not necessarily candor. What he offers in place of the comforting observance of social norms is not refreshing honesty; it’s defensiveness, self-obsession, naked insecurity, and simple cruelty. A politician who truly “tells it like it is” might make for a nice change. But as has been amply documented, Trump can be counted on to lie about pretty much everything, even when the truth would serve him better. There’s no positive spin you can put on his awful instincts, no finessing his lack of finesse. Trump tells us, rather, who he is.

Trump’s peevish approach to accountability certainly does clarify where other people stand. So long as political leaders stick to an acceptable script, their supporters can focus on what they say (e.g., America doesn’t torture) rather than what they do (authorize torture). When what our president says is appalling on its face, there’s nothing to hide behind. The potential risks of a man like Trump speaking for the nation—alienated allies, emboldened enemies, demoralized minority populations, and the outright abandonment of the common good—are awful to contemplate. But when this chapter of American politics passes into history, documentarians will not have to worry about giving Trump’s enablers the benefit of the doubt. They know he doesn’t mean well. He couldn’t fool them if he tried.