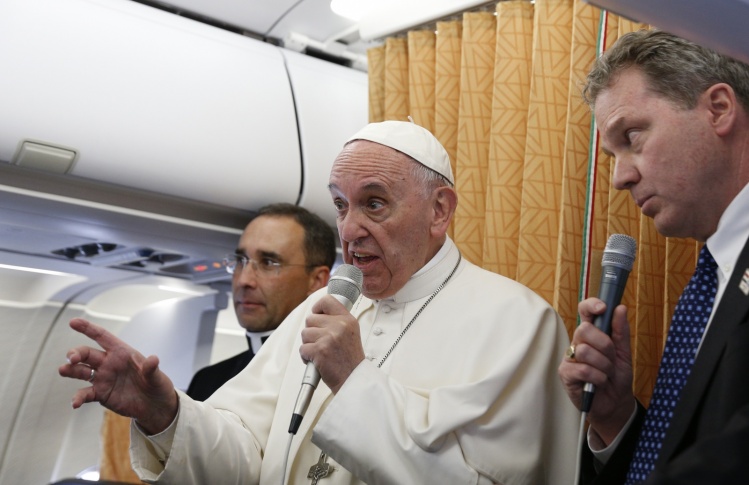 Pope Francis, the pontifex maximus, went to Cairo on the latest and perhaps most important mission of his four years as Bishop of Rome to try to “build bridges of peace, dialogue, fraternity, justice, and humanity.”

Those were the very words he used in a video message to the people of Egypt just days before his brief, Friday-Saturday visit to the nation’s capital.

The pope described Egypt as “the cradle of civilization… where God, benevolent and merciful, the almighty and one God, made his voice heard.” He said he was going to a “land where patriarchs and prophets lived” as a “friend” and a “messenger of peace.”

Francis also said his mission had a concrete goal: to offer “comfort and encouragement for all the Christians of the Middle East, a message of friendship and respect for all the inhabitants of Egypt and the region, and a message of brotherhood and reconciliation with all the children of Abraham, particularly the Muslim world.”

It was a tall order.

Because of the murderous attacks that Islamic fanatics have brutally rained down on Christians in the region, most recently on Palm Sunday, the visit was seen as dangerous and complicated. Naturally, because of this it captured the attention of media organizations and political leaders around the globe.

The pope did nothing less than try to help resolve the most serious and illusive geopolitical conundrum since the Second World War and the horrific events that were part of it.

Ever since his election Francis has insisted that the world is currently involved in World War III. He’s argued that this inter-continental conflict is being waged “piecemeal” on various parts of the planet. And there can be no denying that religion (or as the pope would say, the abuse of religion) is being used to justify much of the slaughter.

And so, as the most prominent religious leader on earth, the pope continues to feel a clear responsibility to make himself vulnerable (just as Jesus did) in an effort to reconcile our fractured and manipulated humanity.

The pope sees this as part of his global mission beyond the boundaries of the Roman Church. And despite his eighty years of age he has embraced it with surprising energy, a sense of urgency and, yet, with a calm and trusting demeanor.

The papal visit to Cairo was billed as a success on many fronts. Still, it will take time before we see if Francis’s quest for a joint Christian-Muslim project against religious fanaticism takes root and grows.

As often happens in our media-crazed world, major events of the past twelve hours (or last five minutes) tend to relegate those things that have preceded them (even when of great importance) to the trash bin.

Unfortunately, the pope’s trip to Cairo did just that by overshadowing at least a few significant developments last week at the Vatican.

The first was the latest round of deliberations that Pope Francis held with his Council of Cardinals (C9), the nine men in red who advise him on questions of Church governance and re-configuring the Roman Curia.

The April 24-26 gathering was the nineteenth since the Jesuit pope instituted the novel idea of having a “kitchen cabinet” or privy council. And many reformed-minded Catholics have expressed hope that he and his aides will radically alter the nature and composition of the Vatican’s central offices.

But at the end of this latest series of meetings the head of the Holy See Press Office, Greg Burke, said, “Don’t expect big changes.”

He told journalist that the C9 were making progress on a new constitution for the Roman Curia. However, he said it would only contain “updates, not fundamental changes” to the old constitution that John Paul II implemented three decades ago.

This will come a huge blow to those who were hoping for a major overhaul of the Vatican bureaucracy. It should also come as a surprise to Pope Francis. It is hard to see how he will be able to realize the “sound decentralization” he talks about in his blueprint for Church renewal and reform, Evangelii gaudium (no. 16) without fundamental changes to the current Vatican system.

And how can a slightly updated constitution for the Roman Curia help engender a greater doctrinal and decision-making role for bishops’ conferences, which the pope clearly desires (EG, 32)? Statutes that are merely modified would also be a rebuke to one of the phrases the pope detests: “we have always done things this way” (EG, 33).

So-called Vatican II Catholics should not lose heart, though. Burke is only conveying the suggestions the C9 have made to the pope. It is still up to Francis to accept, reject, or modify them. He can also circumvent the Roman Curia and curtail its power by bolstering the authority of Church entities outside the Vatican; for example, the national and regional episcopal conferences and the Synod of Bishops.

The Bishop of Rome is the head of the Synod and that is why the general secretariat is located here in the Eternal City. But it is an international institution and technically not part of the Roman Curia, even if it is treated as such and has been, de facto, controlled by the curia up until Francis’s election. The pope still needs to make more juridical changes to the Synod so that it truly replaces the Vatican bureaucracy as the main institution through which he exercises his universal pastoral authority and service. There is still a sense among some in his inner circle that he plans to do so.

There was another event last week that was also overshadowed by the massive media attention given to the dramatic papal visit to Cairo. It was an extremely important address Pope Francis directed on April 27 to an international congress of Catholic Action (CA), a lay movement begun in the late 1800s in Europe that is now most prominent in Italy.

The CA movement eventually gained a strong foothold in various parts of Latin America and has spread to some areas of Africa and Asia. But it has not been widely known or well-rooted in English-speaking countries of the Western world, despite the fact that is the only lay Catholic organization specifically mentioned in the documents of the Second Vatican Council (1962-65).

Pope Francis met with delegates of the CA congress in the Vatican Synod Hall and he spoke to them in his native Spanish for over an hour, mostly making ad-libbed asides from his prepared speech.

The Vatican, at the time of this writing, had not yet made available the complete text of his remarks. But those who understand the pope’s native language should listen to his talk. It begins at about 23:30 in a video posted on YouTube.

Francis used the occasion to repeat, once again, the importance of his 2013 apostolic exhortation, Evangelii gaudium. He said it was an up-dated version of Paul VI’s exhortation from 1975, Evangelii nuntiandi, what he called “the most important document after Vatican II.”

That, in and of itself, should give hope to Catholics longing for changes in the way the Church carries out her mission in this post-modern age.

“There’s a phrase that should never be used,” Pope Francis told the AC delegates.

Is the phrase, “It’s always been done this way.”

“This phrase, if you will allow me, is a bad word,” the pope said.

Connected to this, he said, was a fixation some Catholics have who want to “regulate things and not allow freedom.”  He pointed to the twenty-third chapter of St. Matthew’s Gospel where Jesus calls the “fixated” religious leaders of his time hypocrites.

In this same talk to the CA delegates the pope said church movements (and religious congregations) that are closed-in on themselves and do not deal with the concrete realities facing people today are not really Catholic. Neither are those groups that operate like “satellites” without being tethered to a parish or under the direction of the diocese and its bishop.

“They may be holy agnostics,” he said. “But they are not Catholics!”

One of the essential points Pope Francis tried to convey to the CA assembly is that the faith of Catholic Christianity has always been “concrete” and not something that is esoteric, pie-in-the-sky, or disjointed from the real lives and real experiences of real people. He said it is an “incarnated faith.”

“St. John is very clear. Whoever denies that the Word became flesh is the anti-Christ,” he declared.

“If an ecclesial movement is not ‘incarnated’ in the ecclesial reality of the diocese, and through the parish (or some other diocesan apostolate), it borders on not being Christian, if not anti-Christ,” the pope said.

There is much more in this remarkable talk, especially the pope’s declaration that Catholic Christian faith and action means nothing unless it changes its expression by following how the Holy Spirit prompts believers to respond to the changing times. Hopefully, the Vatican will soon make the full transcript of the pope’s remarks available, including in various languages.

But one thing it tells us again about Francis is that, as Cardinal Donald Wuerl of Washington said recently, this pope is “reconnecting” the church “with the energy of the Second Vatican Council, the energy coming out of that council.”

Vatican II pulled down the sectarian walls behind which the Catholic Church had long taken refuge. It rediscovered and deepened the real consequences of our Christian belief in the incarnation of Jesus Christ and how that demands us to be involved in the world and not stand apart from it.

Leading by example, that’s exactly what Pope Francis did last weekend by leaving the safe and comfortable confines of the Vatican to go to Cairo.