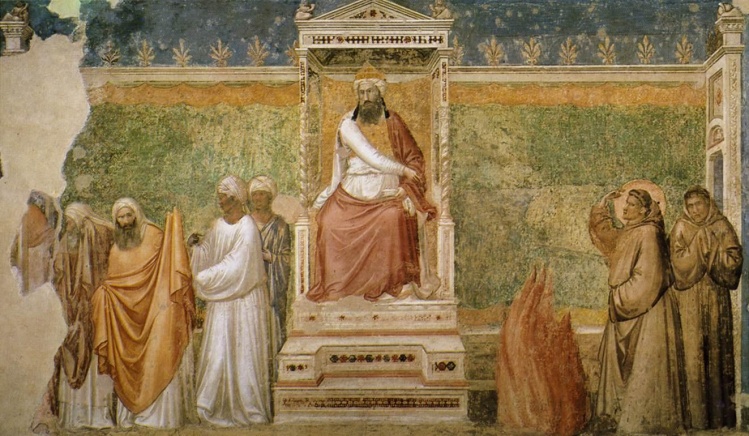 Commonweal contributor Paul Moses is the author of the book The Saint and the Sultan, a history of the meeting between St. Francis of Assisi and Sultan al-Kamil in 1219, during the Fifth Crusade, in Egypt. On Monday, December 26, PBS will be airing nationwide a one-hour docudrama on their encounter titled The Sultan and the Saint. Paul’s book provided some of the source material for the special, and he is also featured in the program. Here Paul talks about what led him to write his book, how his experience as an award-winning journalist shaped his approach, and what he hopes today’s audiences can learn from the story of the meeting between the saint and the sultan.

Commonweal: How did you learn about this little-known meeting between Francis of Assisi and Malik al-Kamil?

Paul Moses: I was reading bits of The Little Flowers of Saint Francis, a charming but not-very-historical account of the saint’s life written about a hundred years after his death. That’s where I found out about it. I wondered: Could this really have happened? The answer was that yes, it did. Francis and the sultan encountered each other in Egypt during the Fifth Crusade in 1219.

CW: What made you decide to write a book about it?

PM: A few days after 9/11, I moved on from my job as Newsday religion writer because I’d started a second career as a journalism professor. It was not an easy time to leave daily journalism. I felt sidelined: What could I do? I wasn’t part of the daily mix anymore, but I had time to take the long view—the very long view—on the story of Christian-Muslim relations. So what I could do was to write this book. Around the time  the Iraq war started, I began to develop a proposal. Then it sat for a while. After Pope Benedict’s disastrous talk in Regensburg in 2006, I felt I had to follow through. The story of Francis and Sultan al-Kamil offers a positive model for Christian-Muslim relations, and that’s very much needed. I wanted more people to know about their encounter, which is why I am very excited that there is now a docudrama about this subject and that it will air on national television.

CW: How did your career as a journalist help (or perhaps hinder?) you in writing about history?

PM: My favorite job as a newspaper reporter was to spend the day going through a big pile of court documents, extracting a narrative story from them. I think that prepared me for historical research. The reporting and writing background transfers well to writing history—there are some journalists-turned-historians I admire very much. As a reporter, you learn to detect the underlying agendas in the language that’s used. That was helpful in trying to separate the true story of Francis and the sultan from the hagiography. The hard part was that I had to learn a lot more about the medieval era to understand Francis and the sultan. That is, I had to understand them in the context of their times, not ours.

CW: How did this particular work differ from your other books, not just in terms of subject and time period, but more as to what particularly motivated you or inspired you? Or in how the research and writing unexpectedly affected you?

PM: Writing The Saint and the Sultan gripped me in a way no other writing project has. I became so immersed in the Middle Ages that at times I would dream I was there. The theme—peacemaking—is found in both of my other books. The first, Days of Intense Emotion, which I wrote with Bob Keeler, was a sort of reported memoir based on our Newsday coverage of Pope John Paul II’s pilgrimage to the Holy Land. The pope reached out to the different factions in a memorable and exemplary way. More recently, I wrote An Unlikely Union: The Love-Hate Story of New York’s Irish and Italians. I wouldn’t liken Irish-Italian conflict to the Crusades, but the rivalry was pretty intense at one time. So that’s a story of peacemaking: How these two groups made peace and intermarried on a large scale.

CW: What’s the relevance today of the meeting between St. Francis and the sultan? Is there something specific that we can apply to our current understanding of Christian-Muslim relations? Or, specifically, Catholic-Muslim relations?

PM: I think one has to be careful about taking events from the distant past and applying them to the present, but I do see a lot of value in holding up Sultan al-Kamil as a model for Muslims and Francis for Christians. We know from the historical evidence that they managed to be courteous and friendly under terrible conditions. Francis never demonized Muslims in the way that was common in the Christian world at that time. He disarmed his rhetoric. And the sultan was known for his goodness to Egypt’s Christians, which is captured nicely in a historically accurate scene in the new docudrama. To Catholics, I would say: If one of our greatest and most loved saints was able to befriend his supposed enemy during wartime, can’t we get along a little better with Muslims today?

Too many people in Catholic circles continue to demonize a religion they don’t understand, even if they claim to be experts in it. Sultan al-Kamil’s actions were praiseworthy. Not only did he welcome Francis, but he also showed a generosity to the defeated Crusade army that shocked its leaders, who believed he had to be a Christian in secret. The truth is that his treatment of Francis and his vanquished enemy came straight out of Islamic teachings, which the sultan, a nephew of Saladin, knew well.

CW: What about its relevance in cultural, societal, or geopolitical contexts?

PM: I think Francis offers a certain method of peacemaking that can be studied today – we see it as a model especially in the Franciscan order. He reached out to the enemy to talk, one-to-one, person-to-person. That can be applied to any dispute, including a geopolitical one. I met a friar in Assisi who had arranged separate meetings with Ronald Reagan and Mikhail Gorbachev before a summit in the 1980s, urging each man to see the other as a human being. He adopted the method from Francis’s example in Egypt.

One of the great things about the upcoming program is that the producers have stimulated much more interest among Muslims in the encounter between Sultan al-Kamil and Francis. Sultan al-Kamil ruled Egypt at a very difficult time. He faced not only the Crusade, but also an even worse threat in a Mongol army coming from the east. He also was surprised by a coup attempt and had to flee, temporarily, for his life. Later, he averted another Crusade through some clever negotiations with Emperor Frederick II. The sultan was a strong, wise, and effective leader whose actions were rooted in the principles of the Quran. He’s a good model for leadership.

‘Too many people in Catholic circles continue to demonize a religion they don’t understand, even if they claim to be experts in it’
sharetweet

CW: What was the most interesting or surprising fact you discovered while working on this project?

PM: The most interesting aspect for me was that St. Francis was essentially a traumatized war veteran, and that as a result, peacemaking became the core of his ministry. The psychological impact of seeing his friends slaughtered on the battlefield—Assisi’s poorly trained merchants against Perugia’s battle-tested noblemen—and of the year he spent in “prison” in a deep hole in the ground stayed with him. I really emphasized that in the book. We often remember Francis for his voluntary poverty. But it grows out of his interest in peacemaking. Medieval accounts quote him as saying that if you don’t own anything, you’ll have no need to go to war to protect your possessions. I think it’s a key to understanding a lot of what Francis did, including his visit to the sultan.

CW: This and your book An Unlikely Union seem to suggest your interest in areas of engagement between two apparently oppositional groups or traditions or cultures. Are you generally drawn to this idea? How can previous eras of divisiveness help us think about and deal with what feels like the truly corrosive divisiveness we seem to be living with today?

PM: I am interested in understanding what brings conflicting groups together. The story of New York’s Irish and Italians in An Unlikely Union gave me a chance to consider that further. I grew up in Brooklyn knowing, from the Italian side of my family, that there had been tension with the Irish in the past. When I researched it, I realized that the antagonism had been much deeper than I ever thought, especially in the late nineteenth century and the first few decades of the twentieth. It was driven by a bitter economic rivalry, creating animosity that played out in various arenas, including Catholic parishes.

How did these rival ethnic groups end up intermarrying on a large scale in the years after World War II? The short answer is that they got to know each other better, and as equals. They mingled in the workplace, unions, social activities, neighborhoods, especially the newly developing suburbs, and in the church, which early on was a place of great tension but which ultimately became the place they married. It took a long time!

We have to get to know people who differ from us. Otherwise nothing will change. We don’t need to wait for leaders of government, church, or the punditocracy to do that for us, either. It’s something individuals can do, and if enough of us do it, we’ll see the boundaries start to fade. I guess I am an optimist, but I think that can apply to race relations, or to political divisions.

And someone has to cross the battlefield, as Francis did. He did so over the mean-spirited objections of the papal legate. That’s the way it often is: those who reach out to the enemy find themselves under attack among their own. Sultan al-Kamil also faced anger among his people for being favorably disposed to Egypt’s Christians. I guess that’s why someone once said, “Blessed are the peacemakers.”

CW: What has been the reception of this story? Have you found Catholic or Muslim audiences surprised or pleased or confused by this part of their history?

PM: I’ve spoken to many audiences, and the reception has always been respectful and often, enthusiastic. I’ve written op-eds on the subject that picked up some anti-Islam vitriol in the online comments, but I’ve also gotten some beautiful emails from people about what the story of the saint and the sultan meant to them, from both Christians and Muslims.

I’ve been touched by the reaction among Muslims, many of whom seemed relieved to find out about this historical encounter. I felt that most of all at the opening of the docudrama, which was in a packed auditorium at George Washington University on the weekend after the presidential election. Hundreds of Muslims were present for the event—it was such an emotional night, to see this story of Muslim-Christian peace presented a few days after a president was elected on anti-Muslim rhetoric, and to be right there in Washington, a few blocks from the White House.

Please email comments to [email protected]ine.org and join the conversation on our Facebook page.