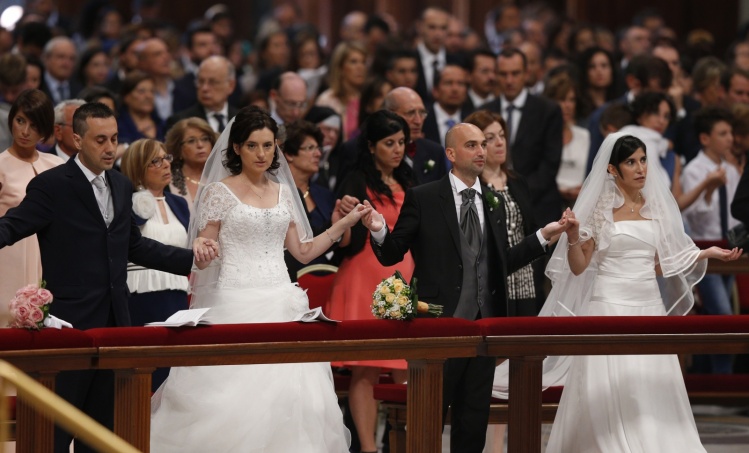 Most of the reaction to Amoris laetitia has focused on whether and under what circumstances divorced-and-remarried Catholics might receive communion. While the attention given to this question is understandable, we should not overlook the much broader topic of marriage preparation itself, which is another fundamental pastoral concern that Pope Francis addresses in the apostolic exhortation. An experience of mine with a recently-engaged couple (I will call them John and Mary) vividly illustrates the significant pastoral implications of marriage preparation.

Both John and Mary wanted their wedding in the Catholic Church. Both were baptized. Both were raised Catholic. This would be the first marriage for both. However, neither John nor Mary were currently members of a parish, though they certainly intended to be “once their life settled down a bit.”

As John and Mary began to inquire about a Catholic wedding, many of the parishes they went to simply would not discuss possible wedding dates until they had officially registered as parishioners. Indeed, a few of the parishes stated that they would require six months of “active membership” before wedding preparation could begin and any date-setting could be entertained. “Well,” you might think, “that’s just parish policy.” However, there is another consideration: John and Mary were not unwilling to become parishioners (even active ones), but they reasonably hoped to become members of the parish where they would celebrate the sacrament of marriage.

Of course this process would be simpler if John and Mary had not drifted away from their home parishes after Confirmation, but their lives unfolded like those of many young Catholics today. They left home to go to college, moved again for graduate school, and then kept moving for first and second jobs and cheaper rents.

Getting engaged is a true turning point for young Catholic couples like John and Mary. For the first time as adults, they began to consider how their faith would shape their future lives now that they saw themselves “settling down” together. But in the meantime, without a confirmed church and date for the wedding, their attempts to finalize the caterer, photographer, and florist remained on hold. They simply couldn’t move forward.

One parish secretary accused them of “church shopping.” A pastoral associate at a different parish, during their first meeting, bluntly asked whether they were living together. The pastor of another parish said that he hesitates to allow any non-members to celebrate the sacrament of marriage there because they might not return after their wedding day.

Even if these are legitimate concerns, should they be the primary ones when a couple has deliberately presented themselves precisely to live their faith as a couple?

When Pope Francis presided at the wedding of twenty couples in St. Peter’s Basilica in 2014, commentators quickly observed that one couple already had children, some had previously been married, and others were already living together. But this inclusive welcome of young couples should not have been all that surprising given what Francis had written earlier in Evangelii guadium. In this, his first major teaching as pope, Francis acknowledged that “the Eucharist, although it is the fullness of sacramental life, is not a prize for the perfect but a powerful medicine and nourishment for the weak.” He also lamented that too often those entrusted with pastoral responsibility “act as arbiters of grace rather than its facilitators.”

Rather than beginning with what is missing or lacking in the lives of these young people, Francis instead encourages pastoral ministers to view the occasion as an opportunity for re-evangelization.
sharetweet

As John and Mary struggled to find a parish that would work with them, their family and friends were puzzled as to why they would still want a Catholic wedding. Nonetheless, they persisted—and after contacting five parishes in their diocese they finally found one that would welcome them.

Some Catholics may be surprised by the experience of John and Mary; others not. Pastoral practice varies widely from parish to parish and diocese to diocese. In Amoris laetitia, Francis affirms a diversity of pastoral approaches, but what should be common to every marriage-preparation program is that it proceeds “without distancing young people from the Sacrament.” That is a pretty clear directive and standard.

Given this instruction, how might parishes practice what Francis teaches? For most Catholics, the parish is their concrete experience of the church, which is why theological reflection on the future of the parish structure is necessary. Fifty years ago, more people belonged to the same parish for their entire life than happens now, just as more people lived in the same neighborhood and worked the same job.

Young Catholics today are far more mobile. And even those who regularly attend Sunday Mass are likely not registered as members of any one parish. But is official parish membership the only or most vital way to express commitment? Ironically, the requirement of parish membership might have discouraged a couple like John and Mary from continuing to practice the faith.

Today and in the future, Catholic parishes must be prepared to welcome couples like John and Mary who are seeking the sacraments. Rather than beginning with what is missing or lacking in the lives of these young people, Francis instead encourages pastoral ministers to view the occasion as an opportunity for re-evangelization. The welcome of Christ is more important than the policies of prohibition. The pope is quick to add that these young Catholics “do not need to be taught the entire Catechism or overwhelmed with too much information.” Yes, while formation is still necessary, the program should be “an attractive and helpful presentation of information that can help couples to live the rest of their lives together ‘with great courage and generosity.’” In many ways, marriage preparation can serve as a re-initiation into the life of the church for young Catholics. And whatever approach to marriage preparation a parish adopts, it must consider how it proceeds “without distancing young people from the Sacrament,” especially since fewer young people today want to celebrate their wedding in the Catholic Church at all.

Catholic sacramental theology teaches that the couple themselves are the ordinary ministers of the sacrament of marriage. The priest and the whole assembly are witnesses to what the couple does. John and Mary, as well as many other young Catholics like them, might teach all of us something about living the Christian faith today—if we are prepared to be there with them.

There is always the risk that couples might not return to a Catholic parish after their wedding day. But it is certain that they will not return if Catholic parishes do not soon discover practices to welcome them in the first place.