How COVID-19 Has Affected One Mexican Pueblo 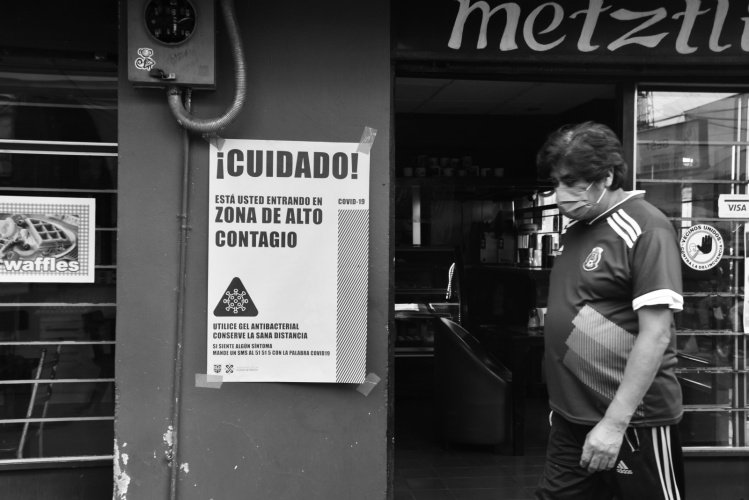 Outside a café (Joseph Sorrentino)

When I photographed the fiesta that marks the death of San Gregorio, the patron saint of San Gregorio Atlapulco, I worried about the consequences of thousands of people crowding together while there was a pandemic underway. That was back in March. During the ten-day event, vendors lined the streets in the pueblo’s center, and crowds turned out for daily concerts and the last night’s fireworks. It turns out I was right to be worried. Out of 1,812 colonias, pueblos, and neighborhoods of Mexico City, San Gregorio Atlapulco would soon have the highest number of cases of COVID-19.

In March, Ábel Cortina, who owns a small store near the pueblo’s center, brushed off the threat posed by the virus. “Nothing is going to happen,” he told me. “It is more like a rumor, from what I can see.” Since then he’s changed his mind. “Yes, it is a problem,” he now admits. “It is not a rumor and it is affecting people. We did not see the danger. We had our fiestas, we did not keep distance, we carried our saints in processions.” He now wears a mask and keeps a bottle of hand sanitizer on the counter. “I was wrong in March,” he said. “We were wrong.”

Like virtually all pueblos in Mexico, San Gregorio Atlapulco is overwhelmingly Catholic. The people here are very devoted to the pueblo’s patron saint. As I reported in May, the local parish priest told parishioners in March that San Gregorio had stopped a plague in 590 and would do the same with this virus. People believed him. Octavio Flores was one of them and for several months he saw no need to wear a mask. “San Gregorio will protect us,” he declared. His grandmother, Olga Peralta Muñoz, agreed: “I am one hundred percent certain he can,” she told me then. They no longer feel that way. “The hope that San Gregorio would protect us from the pandemic has failed,” Flores said. “I see the problem is much larger. Now we have to protect ourselves.” His whole family now wears masks. The parish priest has stopped promising miracles.

It has been difficult to get accurate information about the number of deaths in the pueblo, partly because so many people are still in denial.
sharetweet

It is believed that the virus was brought to San Gregorio Atlapulco by—among others—residents who sell their produce or work in the Central de Abastos (Supply Center) in Mexico City. It’s the world’s largest market, covering 810 acres. More than 300,000 people pass through it every day. Not surprisingly, it became one of Mexico’s viral hotspots. Despite the dangers, however, people continued to work there. “We have to keep working because there is nothing else,” said Juan Serralde. “I wear gloves, a mask and glasses. When I am done, I take off my gloves and mask, put them in a bag, tie it up and put it in the trash.” He told me he was afraid, but he couldn’t afford to stop going. “I go to the city for necessity, to provide for my family.

In Mexico City it has been mandatory to wear a mask since April, but the rule is not being enforced in San Gregorio Atlapulco. Santiago Mendez Galicia didn’t wear a mask because he didn’t believe COVID-19 existed. One day at work, he got caught in the rain and soon after started feeling sick. “I believed it was a cold,” he said. But, just to be safe, he isolated himself. When his fever and sore throat persisted, he went to three doctors before finally getting tested for COVID-19. The results came back positive. Fortunately, his symptoms were mild and he’s since recovered. But now he wears a mask.

Posters all over the pueblo instruct people to wear masks, but there are still many people who don’t. Nazario Fernandez Landero is a street vendor. He sells pots, pans, and other kitchen items. On the day I spoke with him, he wasn’t wearing a mask. “I was in a hurry,” he said apologetically, “and I forgot my mask.” When asked if he was afraid to be without a mask during a pandemic, he pointed toward the sky. “No,” he said. “If God says it is time to take me, he will take me. I am not afraid.”

It has been difficult to get accurate information about the number of deaths in the pueblo, partly because so many people are still in denial. “There are people who die of COVID,” said Javier Márquez Juárez, “but their family will say it was something else. Sometimes it is because they are afraid of discrimination.” Anecdotal evidence suggests that the number of deaths is high. Virtually every grave in the pueblo’s cemetery is adorned with a metal cross. David Castañeda Aguilar, who owns an ironworking shop, has made his share of them. “I used to make maybe two or three a month,” he told me recently. “Now it is two or three a week.” He’s certain the increase is due to COVID-19 deaths. “People act differently,” he said. “They want the cross right away, the next day. Their expression is different; people look a little sadder, they wear masks and glasses, they do not shake hands.” He paused. “I do not like doing this type of work because in some cases, they are for people I know.”

Dr. Iván Zacanlas Pérez Nieto estimates he’s seen thirty or forty patients with COVID-19 symptoms. “I tell them to be vigilant, to isolate,” he said. He also tells them to return if the symptoms get worse. “Some people do not return. Others...I tell them, ‘You may have COVID. Do not go out.’ Then I see them on the street or in a car. They do not wear a mask. They say, ‘It is just a cold.’ It is very frustrating.” When people’s symptoms become serious, he sends them to the hospital. But, according to Domingo García Flores, the administrator at Clinica Médica Isabel, many people refuse to go. “They believe that doctors want to kill them.” García Flores has served as a mayordomo, a lay religious leader, and his faith is unshakeable. But he knows what it takes to combat this virus. “Faith gives us much but we have to take precautions,” he said. “Faith alone is not enough.” That message has been slow in getting through.

Can the Chinampas Survive?