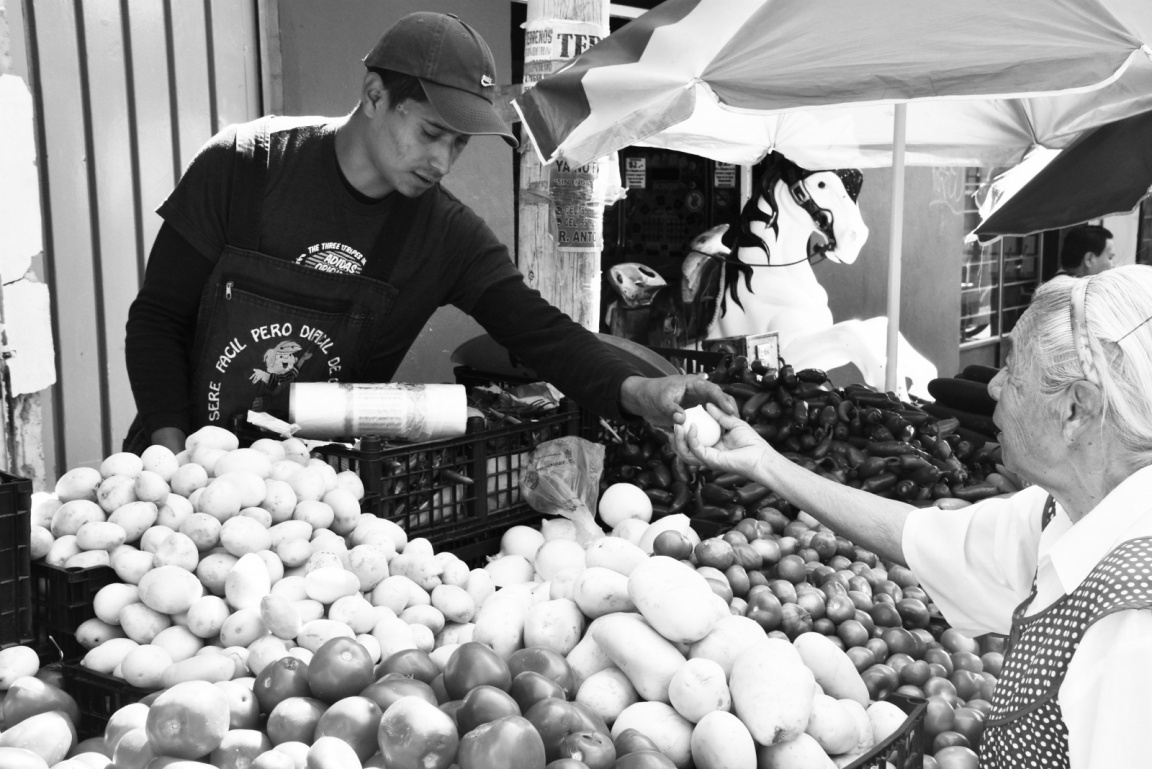 Inocencia sells donuts in San Gregorio Atlapulco’s market. She sits calmly behind the small folding table that holds her donuts, occasionally calling out to passersby to tell them what kinds she sells: chocolate, pink-frosted, and sugar-coated. They cost four pesos, or seventeen cents, each. “I earn fifty or sixty pesos [$2 to $2.50] a day,” she told me. “This is all the work I have.” She, like everyone in the pueblo, knows about the coronavirus. But, she said, “If I do not work, I cannot eat. I am afraid but I have to work. I have no choice.” She doesn’t wear a mask or gloves.

San Gregorio is one of fourteen pueblos that together make up Xochimilco, a borough of Mexico City. Its population is between 25,000 and 30,000, and although the phrase “Mexican pueblo” may conjure up images of a lovely village tucked in the mountains, San Gregorio is very urban and mostly working-class. It’s a pueblo originario, an original pueblo, which means it has held on to its indigenous traditions. That means there are many fiestas, and in normal times that’s a good thing: the streets and churchyard fill with people; there is food and dancing. But these are not normal times, something the pueblo has been slow to realize. In fact, San Gregorio Atlapulco is woefully unprepared for the virus.

This year the celebration for the Feast of San Gregorio, the pueblo’s patron saint, was held from March 12 through March 22. Many people here already knew about the virus and how it was likely to spread in large crowds. Nevertheless, thousands of locals attended processions, fireworks, and nightly concerts. “It was dangerous to have the processions,” admitted Domingo García Flores, the local medical clinic’s administrator. “I talked with people, but they said that it was something political, something that would keep people in their homes.” When he asked people if they were worried about the virus, they told him, “No pasa nada”—nothing will happen. 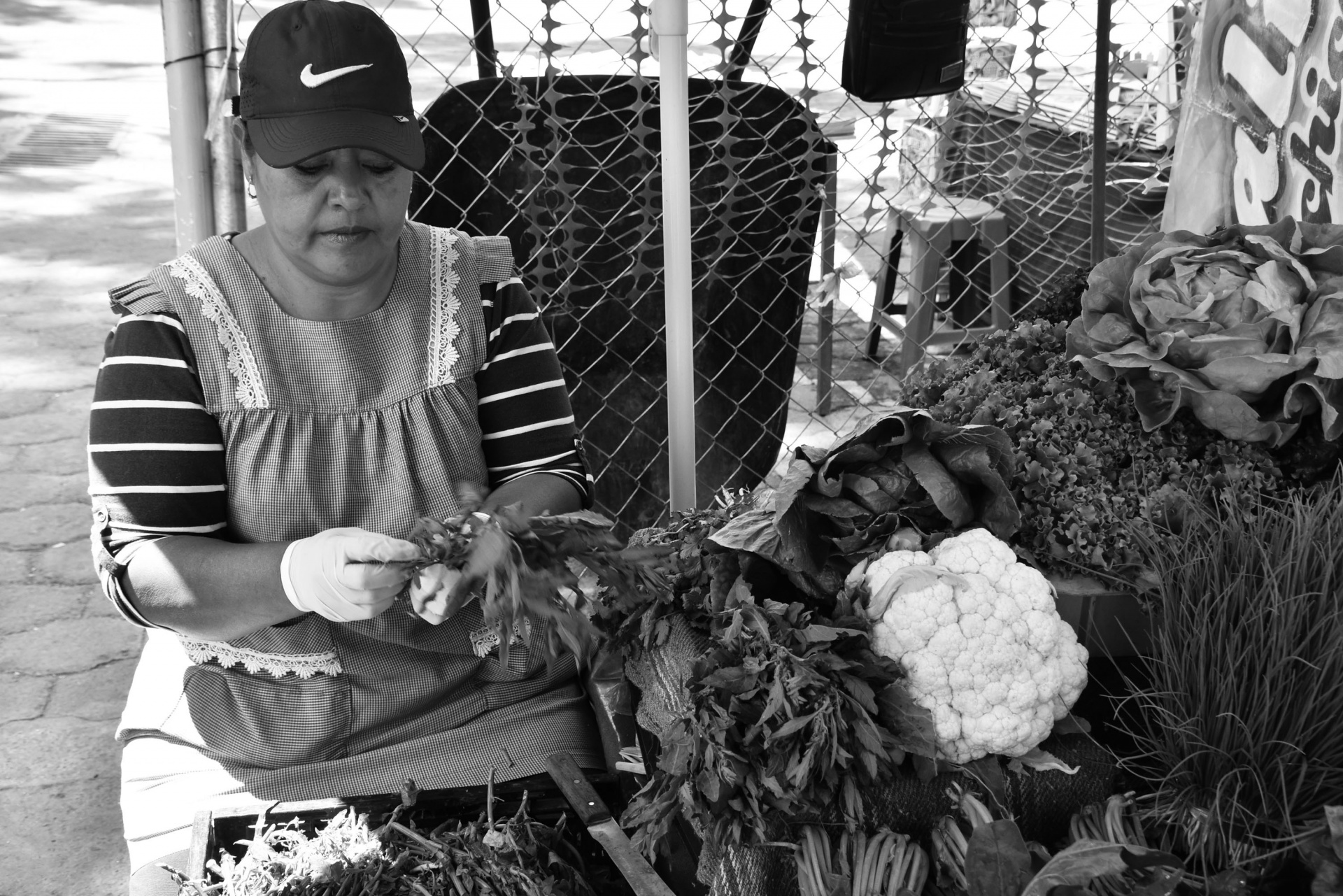 San Gregorio’s market takes up four narrow streets, which are lined with stalls packed tight with fresh produce, a few small stores, and tiny restaurants called fondas. Most of the produce comes from the chinampería, an ancient agricultural area near the pueblo. Carmen Cruz Sánchez has worked in the chinampería for twenty years and has had a stall in the market for five. “This pueblo is dedicated to this, to selling vegetables,” she said. “This is how we live.” She occasionally wears gloves but not a mask, though she said she would if she was ordered to. She’s currently earning about half as much as she normally does because there are fewer people in the market. “We are surviving by buying the basics,” she added, “beans, rice, eggs...rarely meat. If the government shuts us down, we are campesinos and I will ask: ‘How will you help us?’” Although there are now fewer people in the market, it’s still crowded. In the fondas people still sit shoulder-to-shoulder. Some store-owners have painted circles on the ground to indicate where people should stand, but not everyone pays attention to them. “Sometimes you have to hit people to get them to understand,” said Haydeé Telesforo, a store-owner.

The Mexican government has already ordered people to stay home; if the COVID-19 outbreak gets worse, as it almost certainly will, more severe restrictions may have to be imposed. The government may close the pueblo’s markets. “If I have to close, I think I could survive,” said Armando Davíd Nieto Rodriguez, who works at the market. “But surviving is very different from living, no?”

Alquiladora San Gregorio stocks items used in fiestas. “We have everything—tables, chairs, tents,” its owner, Artemio Godoy Venancio tells me. The shop is still open six days a week, but with all major fiestas now canceled, there’s not much business. “We are not renting to anyone,” Godoy Venancio said. “We are just working inside...organizing, painting. I normally have six workers but now, only two a day. One day two come in, the next day, some others. It is to give the boys some money...they have families, children.” Óscar Morales Álvarez has worked there for two years. He lives in San Salvador, a two-hour bus ride away. “I am afraid on public transportation,” he said. Still, he doesn’t wear a mask. “Because of the cost.” Masks cost twenty pesos, about a buck. Godoy Venancio thinks he can hang on for another couple of weeks before he is forced to close. When I asked Morales Álvarez if he had any savings, he let out a short laugh. “Of course not.” He said he has animals he would slaughter for food when necessary. 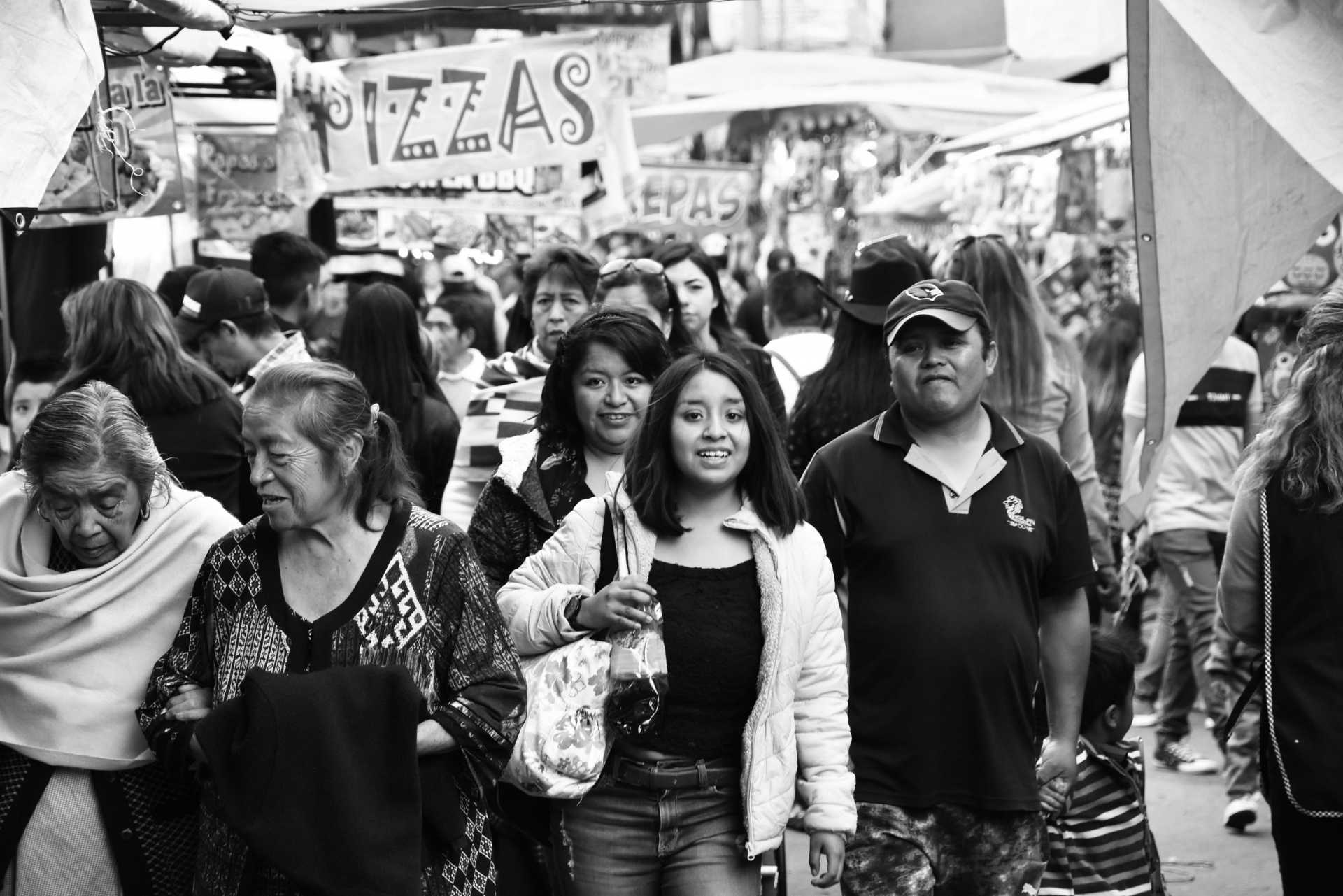 Piety is an extremely strong force in San Gregorio. Many people here make pilgrimages to holy places like Chalma—a two-and-a-half-day trek through mountains during the rainy season. They show up in thousands for special religious events, especially during Holy Week. But now that same piety threatens to put people at risk.

At one of the last Masses here before public liturgies were suspended, the pastor of the pueblo’s parish, Padre Arturo, reminded people in his homily that San Gregorio, who was pope during another plague in 590, organized prayers and led processions. Miraculously, the plague vanished. “[Padre Arturo] said we must entrust ourselves to San Gregorio,” said Octavio Flores, “and that in the same way that he saved his people from the plague he will save us from the coronavirus.” The fifteen-year-old Flores is a member of Los Varones, an organization of fourteen young men who dedicate a year or two to serving the church. “I believe San Gregorio will protect us, certainly,” he continued. “I do not use a mask or gloves because my faith will protect me.” His grandmother, Olga Peralta Muñoz, also believes the pueblo will be protected. “Faith is the most important thing,” she said. “San Gregorio will protect us. He can stop this virus. I am a 100-percent certain that he can. He is already doing it.” 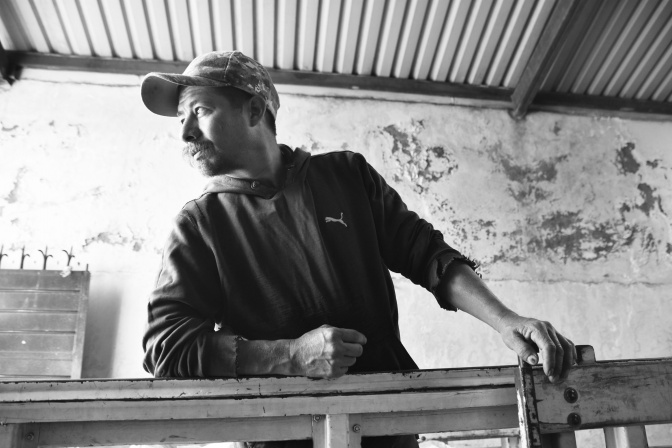 But not everyone believes the pueblo will be saved by a miracle. Ricardo Castro, also a member of Los Varones, takes a more pragmatic view: “I do not doubt that faith will help us but it is important to take precautions as well.” Karla Manzanares, a local photographer, takes every possible precaution and was upset to hear what Padre Arturo had said. “San Gregorians are very religious,” she said. “The priest has a responsibility because a lot of people believe what he says. He should tell people to take precautions.”

Each pueblo is supposed to have a mayor, but the last mayor of San Gregorio Atlapulco quit three years ago over a salary dispute. “Because there is no mayor, there is no one in charge,” said Heriberto Galícia Muñoz, the president of Comité de Féria, which organizes local events. “We do not have the power to tell stores to close or to tell people what to do.” Many of the people here have a deep distrust of the national officials who do have this power. “People believe the [federal] government is lying to them,” said Javier Márquez Juárez. “They do not believe the epidemic is so serious.” Márquez Juárez has served as a mayordomo, a lay religious leader. Mayordomos have standing in the community, know many of the local people, and can exert some influence. Hoping to organize a committee devoted to combating the spread of the virus, Márquez Juárez sent texts to several of his fellow mayordomos and others in the pueblo. No one responded. “It is dangerous,” he said sadly. “Look at what is happening in other countries.” 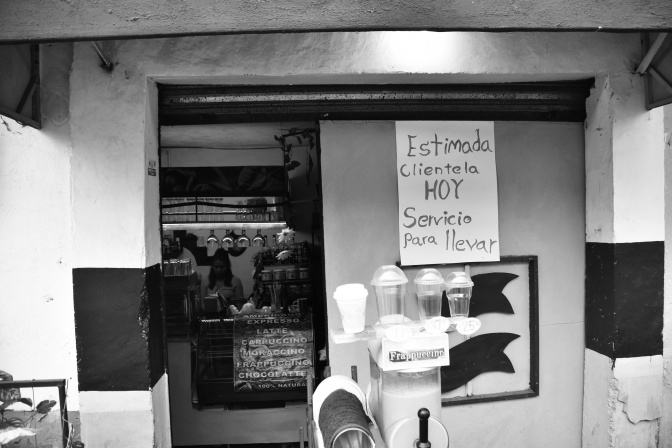 The small medical clinic in San Gregorio has recently enacted some stringent precautions. Only one person may enter at a time, and patients must wash their hands and maintain a safe distance from one another while waiting to be examined. The clinic sends anyone with COVID-19 to a hospital in another pueblo. Officially there have been just twenty confirmed cases in San Gregorio, but this is likely a low estimate; one local funeral-home director said he had already seen four deaths. “People here don’t understand the magnitude of the problem,” said García Flores, the clinic administrator. “We need a better distribution of information that tells how to prevent the virus spreading in our community. San Gregorio is a pueblo where we’re not concerned with our health. We’re certain nothing will happen. If you have a country like the United States where the virus can overwhelm, just imagine something like that in Mexico. We do not have, as a country, the resources necessary...the infrastructure, hospitals or beds. The only road is prevention.”

We are family. If necessary, I will give food to others. We will help each other. We are all brothers.
sharetweet

There have lately been some indications that people are starting to take the virus seriously. Mexico City proper is now locked down. Non-essential stores there are closed, and many people are obeying the government’s order to stay home. In San Gregorio, there are fewer handshakes and hugs and its two restaurants and one café are offering take-out only. Still, here—and in most pueblos in southern Mexico City—life continues as before. I recently drove through nine pueblos and found that all the markets and almost all the stores were still open and busy. This despite large, bright orange signs that read, “Salva Vidas: Quédate en Casa.” (Save Lives: Stay Home.)

These are uncertain and troubling times everywhere, but there are at least two things that allow one to hope that the pueblo will get through this crisis intact. First there’s the chinampería. We will have food. The other is the strong sense of community. “We are very connected as a pueblo,” said Aristides Norberto Enriquez Nieto, who owns one of the restaurants. “We are family. If necessary, I will give food to others. We will help each other. We are all brothers.”

In the hills that surround San Gregorio Atlapulco there are eight-hundred-year-old ruins. In the chinampería there is a Neolithic site that’s four thousand years old. This pueblo has survived a lot of disasters. It will survive this one too. 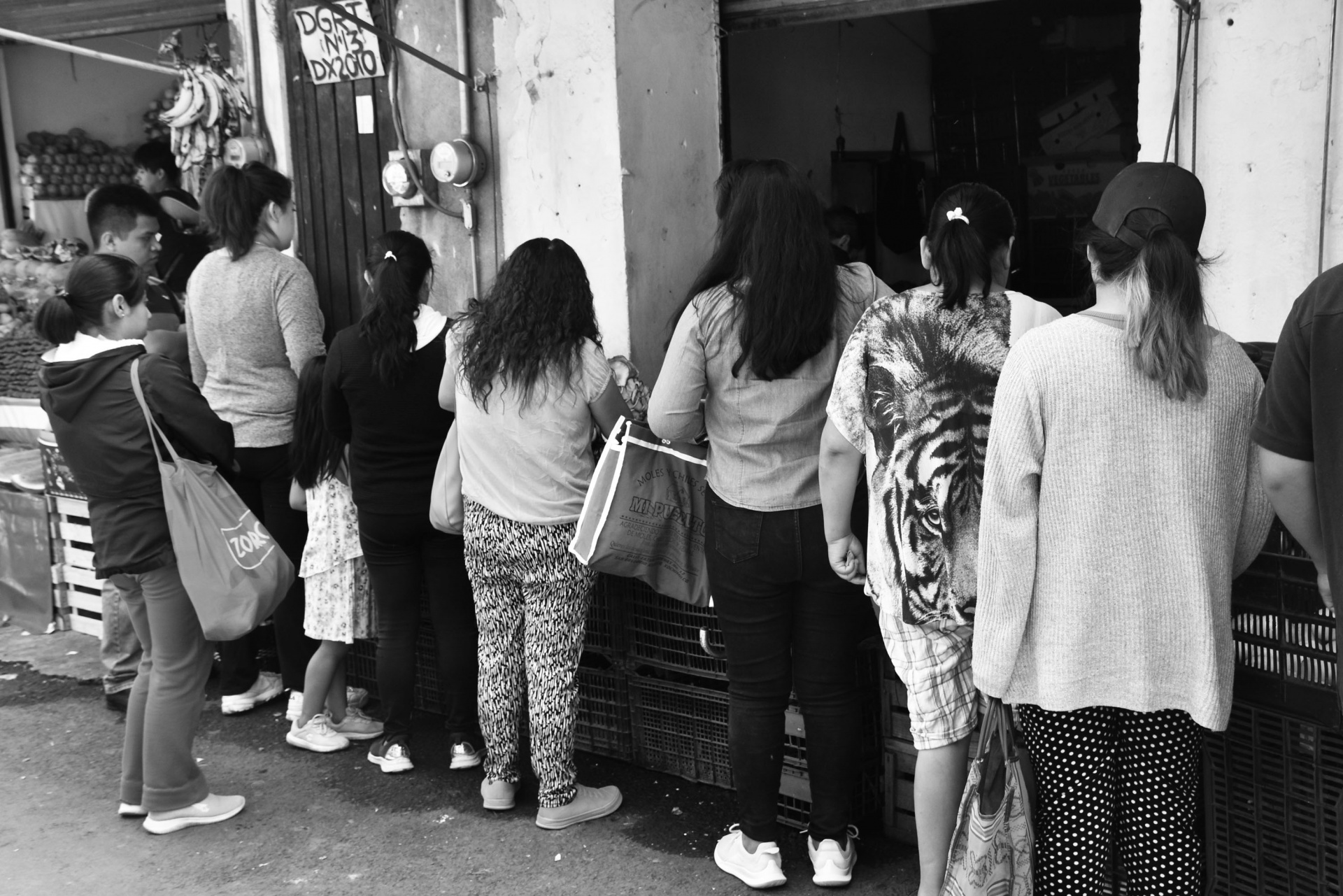