Watching the Left Castrate Itself 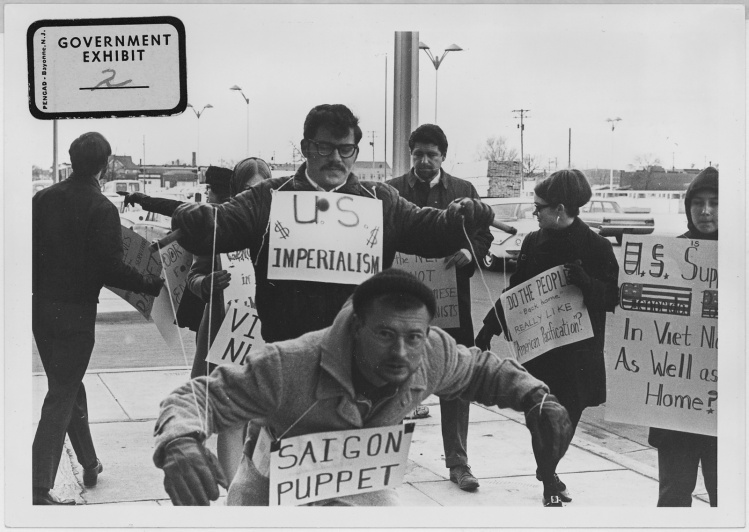 Protesters carry signs and act out “Saigon Puppet” demonstration in 1967

Among the mixed blessings of outliving the biblically allotted span of three-score-years-and-ten are half-century celebrations. For those of us who came of age politically in the 1960s, this means a lot of déjà vu all over again. Fifty years since Kennedy’s election, the Cuban missile crisis, the March on Washington, JFK’s assassination, the Selma to Montgomery March, the Voting Rights Act, the Watts riot.

Inevitably these commemorations simplify, magnify, and even glamorize the dramas of the 1960s. No small part of the recent upsurge of youthful militant activism is driven, I believe, by the desire to emulate what now looks like a decade of heroic political struggle.

Nineteen-sixty-seven poses a particularly rich menu of choices for commemoration. The “Summer of Love” in Haight-Ashbury? Or the “Long Hot Summer” when violent urban conflicts broke out in over 150 black inner-city neighborhoods including Detroit (forty-three dead and thousands arrested) powerfully portrayed in Kathryn Bigelow’s film? The October March on the Pentagon?

That was the national atmosphere that gave birth to the National Conference for New Politics, convened in Chicago over the Labor Day weekend of 1967. Last summer I found it surprising but also salutary to see the conference included in a litany of landmark events to be remembered from a half-century ago. The chaos surrounding the conference extended even to the preposition in its name: I called it “on” in the September 29, 1967 issue of Commonweal. Other accounts use “of.” Most use “for.”

In the last days of August, two thousand (some estimated three thousand) activists from scores of local and national organizations began wandering through the lavishly decorated lobby and banquet rooms of Chicago’s historic Palmer House. There were tattered veterans of the struggles for racial justice and an end to the war in Vietnam; middle class liberals; Black Power advocates; white radicals who had graduated from campus to community organizing. They were all convinced that halting what seemed to be an interminable war and intractable racial inequities required major social and political changes.

What exactly did that mean? Create a third party? Run a national ticket in 1968, say of Dr. Martin Luther King, Jr. and Dr. Spock (the eminent pediatrician, not the Vulcan)? Focus money and energy on grass-roots organizing rather than electoral politics?

Dr. King himself gave a keynote talk at the Chicago Coliseum. (It should have been a portent that he was heckled by black teenagers.) There were other eminences: Julian Bond, Dick Gregory, Andrew Young, a few Congressmen, future leaders of a still emerging feminism, H. Rap Brown, who had memorably passed judgment on the summer’s riots with the phrase, “Violence is as American as apple pie.”

The New York Times and Washington Post sent reporters, as did the Soviets’ Tass and the London press. Dwight Macdonald and Renata Adler were on hand for Esquire and the New Yorker, along with leading writers for The New Republic and New York Review of Books.

For several days wheels whirred within wheels. Committees and subcommittees churned out resolutions or bogged down in debate.
sharetweet

For several days wheels whirred within wheels. Committees and subcommittees churned out resolutions or bogged down in debate. Factions and caucuses of every variety huddled and maneuvered. A group of black nationalists set up their own separate but equal New Politics meeting in a South Side church. The threat of a black walkout always loomed.

Indeed, the defining action of the conference occurred when the Black Caucus issued an ultimatum: Approve a thirteen-point manifesto or we’re leaving.

Some of the manifesto’s points were vaguely separatist: “Support the concepts of self-determination for black people.” Some were rhetorical: “Call upon all ‘so-called’ freedom-loving white people … to unshackle their minds from old conceptual structures ….”  One point demanded “total and unquestionable support” for all wars of national liberation. Another was a sweeping condemnation of Israel. Point 11 proposed “white civilizing committees … to civilize and humanize the savage and beast-like character that runs rampant throughout America, as exemplified by George Lincoln Rockwell and Lyndon Baines Johnson.” The penultimate demand was approval of all resolutions (whatever they were) passed by an earlier Black Power Conference in Newark. The Black Caucus asked for half the votes on all conference committees, a demand eventually extended, logically enough, to half the votes on all conference actions, period.

The debate on these demands, if one could call it that, did not dwell on the points the conference was being asked to endorse. Rather the delegates mainly talked about “gestures,” “acts of faith,” and “genuine trust in our black brothers.” By an overwhelming majority the conference handed the voting power of 2000-3000 delegates over to 300 members of the Black Caucus.

“Stalinism!” said some older radicals, aware of Communist presence at the conference. “Self-castration!” said some younger radicals, scornful as always of liberal virility. “Police-sponsored provocateurs!” concluded others with no real evidence but some sad experience.

In fact, the Black Caucus wielded its absolute power gingerly and, truth be told, was almost as internally divided and unruly as all the other groups. (I did not have access to its sessions, only a Pakistani brother-in-law whose skin tone qualified him, to say nothing of his third-world origins; he kept me informed.)  But the damage was irreparable. The prominent leaders quietly slipped away; potential donors quietly closed their checkbooks. At a more profound level, the ultimatum style, the blanket endorsement of propositions that large proportions of delegates could not sincerely hold, and the effective abandonment of genuine debate and democratic voting quite resoundingly put the lie to any claim of representing a “new politics.”

The reviews were not favorable. In the New Yorker, Renata Adler was unsparing: The conference she wrote, “seems to have turned from a political or moral force into an incendiary spectacle, a sterile, mindless violence-enamored form of play.” In Fire in the Streets, a 1979 history of America in the 1960s, Milton Viorst described the conference as “tumultuous, abusive, philistine.”

A little more than a year later, the nation elected Richard Nixon president.

If it struck me as surprising that a non-event like the conference should be included in a list of 50-year anniversaries to be spotlighted, why did I also find it salutary? What can the fin-de-Sixties teach us about the time of Trump? Or more precisely the time of anti-Trump resistance? An obvious lesson, I suppose, is that what many imagine as a heroic decade had ludicrous or, worse, self-destructive aspects accounting for its eventual crash landing. More apt may be a lesson about the consequences when the mettle to test the content of political speech collapses before the identity of the speakers. At the 1967 conference, you could say almost anything without being challenged if you had the right credentials. The credentials at that moment were racial. (By contrast an insurgent feminist caucus was hooted down when it demanded a hearing.) Today the credentials that too often bestow immunity from challenge include gender, transgender, populist, evangelical, anti-global, rural, and any number of quite unimpeachable forms of victimhood.

Among the many unchallenged catchwords of the New Politics conference was “revolution.” It is painful to recall that a dozen years later, after the Great Nixon Meltdown and the Ford-Carter Doldrums, “revolution” finally came to America. Funny, though, it was inevitably preceded by the word “Reagan.”