Was Bishop Livieres sacked for abuse-related reasons or not? (UPDATED)

"Vatican Says Bishop's Dismissal Not the Result of Sexual Abuse," read a Catholic News Service headline published Saturday. The story, written by Francis X. Rocca, tut-tuts those who interpreted the firing of Bishop Livieres of Ciudad del Este, Paraguay, as a sign of a Vatican crackdown on sexual abuse. The diocese was investigated by the Vatican in July after local Catholics, including the archbishop of Asuncion, Paraguay, Pastor Cuquejo--the metropolitan bishop--reportedly complained to Rome about several aspects of Livieres's leadership. Among his concerns was Livieres's decision to accept and promote a priest, Fr. Carlos Urrutigoity, who had been accused of sexual misconduct by several people dating back to the late 1980s. Rocca's story suggests that Urrutigoity had little to do with Pope Francis's decision to replace Livieres.

Coming two days after the Vatican's arrest of former Archbishop Jozef Wesolowski, pending a criminal trial on charges of paying for sex with boys during his time as nuncio to the Dominican Republic, the dismissal of Bishop Livieres appeared to be the latest step in a Vatican crackdown on sex abuse. But the Vatican says sex abuse was not a significant factor in Bishop Livieres's dismissal.

Here's what Vatican spokesman Federico Lombardi, SJ, told Rocca: "Let's not confuse Wesolowski and Livieres; one is a case of pedophilia, the other is not." Lombardi continued: "Livieres was not removed for reasons of pedophilia. That was not the principal problem." What was? "There were serious problems with his management of the diocese, the education of clergy, and relations with other bishops," Lombardi said."

That sounds a bit like what Lombardi said to the New York Times last week: “The important problem was the relations within the episcopacy and in the local church, which were very difficult.” He explained that the accusations against Urrutigoity were “not central, albeit have been debated.”

For his part, Livieres, a member of Opus Dei, maintains that he was the victim of a smear campaign orchestrated by nefarious practitioners of liberation theology, presumably not those who were recently invited to the Congregation for the Doctrine of the Faith--or were they? Considering this explanation comes from a man who on more than one occasion publicly called his metropolitan gay, it may not be totally reliable.

It's hard to say, at least with respect to the CNS story, because we don't know what Rocca asked, but it's awfully strange that the Vatican spokesman would compare Livieres and Wesolowski, because only one of those men is accused of sexually abusing children. No one has claimed Livieres has molested kids. What local Catholics have complained about is that Livieres took on a credibly accused priest--whose previous bishop removed his priestly faculties and suppressed the pseudo-traditionalist group he founded--and then promoted him to second in command of the diocese. What's more, Urrutigoity has not been accused of molesting children. So why is Lombardi talking about pedophilia? Nobody suggested the pope fired Livieres "for reasons of pedophilia."

Lombardi didn't mention pedophilia to the Times, but he did seem to suggest that the Urrutigoity case played some role in the pope's decision. God knows the pope had no shortage of reasons to give Livieres the heave-ho. He denounced brother bishops to Pope Benedict XVI (who, he says, ordered him to do something about liberation theology in Paraguay). He clashed with them about a bishop who became president of Paraguay. He built his own seminary even though his brother bishops opposed it. He claimed the local church suffered from "doctrinal disorder." He went on TV and announced that the archbishop of Asuncion was a homosexual. He was accused of embezzlement. And then there was Urrutigoity.

Urrutigoity became a problem for Livieres back in 2008, when local Catholics learned that he had been invited by Livieres to serve in his diocese. They complained. Livieres published a  letter defending Urrutigoity, and named him a monsignor. When news came in March 2014 that Livieres had promoted him to vicar general, local Catholics again protested, adding this controversy to their complaints about his style of governance. This time they were joined by the archbishop of Asuncion. The Vatican intervened in July. Urrutigoity was removed from his position, and Livieres was told to suspend ordinations. Weeks later Livieres published that stunning self-defense on his diocese's website, which included a long section claiming Urrutigoity's innocence (complete with selectively redacted documents claiming he was definitely not gay). Obviously Livieres believed Urrutigoity was not an insignificant factor in the Vatican's decision to investigate his diocese.

So of course Urrutigoity was a precipitating factor in the downfall of Livieres. Without that controversy, complaints about Livieres might not have gained traction in Rome. And as soon as they did, and Livieres decided it was a good idea to publicly push back on the Vatican's intervention, he sealed his own fate. Was Urrutigoity the reason Ciudad del Este is currently without a bishop? Probably not. So what does Lombardi's unwillingness to say that he played a significant part in the pope's decision mean? That some inside the Vatican are still not comfortable with the idea of removing a bishop for mishandling accused priests? Probably. That the Vatican is not getting tough on bishops who mishandle cases of accused priests? Probably not.

Just ask Bishop Robert Finn of Kansas City-St. Joseph--the only active bishop who stands convicted of an abuse-related crime: failing to report suspected child abuse. According to the National Catholic Reporter, his diocese was recently, and apparently secretly, visited by the archbishop of Ottawa, Ontario. Jack Smith, Finn's communication director, told me that the apostolic nuncio informed the bishop about the visit in advance. Finn was informed that neither he nor anyone "could speak of it, including to senior staff, and his communications director (me)." Smith continued: "The same, presumably, was conveyed to all who were interviewed." **

At the behest of the Vatican's Congregation for Bishops, Archbishop Terrance Prendergast, who happens to be a Jesuit, asked several KC Catholics whether Finn was fit to be bishop. Apparently Finn's former chancellor--now posted in Chicago--asked the Vatican to intervene. (Remember when Cardinal Bernard Law was apostolically visited under John Paul II? Me neither.) Note: NCR's sources did not say that Prendergast led with queries about sexual abuse. He asked whether Finn was a good bishop. That's the kind of question that might make a bishop nervous, regardless of his record on sexual abuse.

** This paragraph has been updated with a statement from the Diocese of Kansas City-St. Joseph, which corrected my repetition of the claim in NCR's story that Finn was in Rome when the visit occurred, and clarified the terms of the visit. In an update, NCR reports that Smith "originally told NCR that no one in the diocese had heard of Prendergast's visit. Smith then wrote in an email to NCR later Monday that Finn had been aware that Prendergast was in Kansas City." 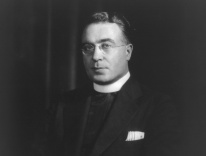