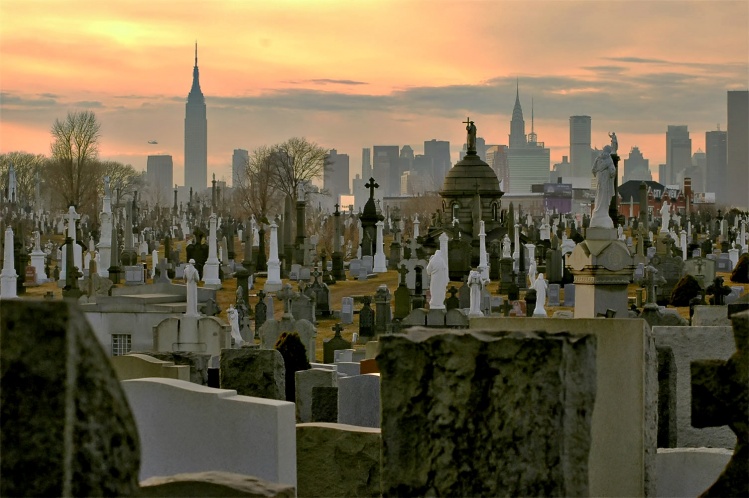 For much of the Catholic world, November is a time of remembering the dead—from All Saints day (Nov. 1) and All Souls (Nov. 2) on through the entire month. As we near the end of November, I thought it might be interesting to post a few thoughts about cemeteries, concluding with what is surely one of the most outstanding new Catholic structures of entombment in the United States: the crypt beneath the Cathedral of Christ the Light in Oakland, California.

I should preface this by saying I love visiting cemeteries (see below for a photo slideshow of those mentioned here; click the "i" icon in upper-lefthand corner for captions). The most famous one I’ve visited is the Père Lachaise cemetery in Paris—a huge rambling network of paths crammed with monuments of all sorts, some belonging to musicians, artists, and writers who are very famous indeed (Maria Callas, Frédéric Chopin, Marcel Proust, Edith Piaf, Oscar Wilde) and whose graves devotees continue to bedeck with flowers. Others, bearing names that are not so well known, are nonetheless impressive, as are the collective monuments. Three-and-a-half million people a year visit this cemetery.

While visiting Istanbul, I had a chance to see the famous Ottoman cemetery at Eyüp, an historic landmark spread over an extensive, hilly plot of land. The custom of carving a turban or fez on the top of the tombstone of an Ottoman man (to show his rank), or flowers on the tombstone of a woman (the number corresponding to the number of her children), makes these grave markers different from any I’ve seen elsewhere.

The reason for the cemetery is that Abu Ayyub al-Ansari, a close associate of Muhammed, was buried there first. Thus Eyüp is also a pilgrimage site, and devout Muslims pray at his tomb, which we also visited. Outside the entrance to the tomb, a man sat at a table giving each child who visited a sugar cube—to make sweet the remembrance of this place.

My own parents and many members of my father’s family are buried at Calvary Cemetery in Queens New York, which is a vast city of the dead in the shadow of the skyline of Manhattan. For those who lived their lives in tenements and apartment blocks, the rows upon rows of gravestones at Calvary are an echo of their city. Yet each grave has kept its individuality too. While visiting there once, we found a marker for an elderly Italian relative whom I never knew, but her photograph was embedded in the tombstone. I did a double-take: she had the same strong chin that I inherited from my father’s side of the family. We somehow belonged to one another, though I knew nothing of her story.

I’ve also visited the cemetery in Pennsylvania where my mother’s relatives are buried, a depressed area that was once a coal-mining district. The family members buried here were all very dear to me from my childhood: grandparents, godparents, aunts, and uncles. The sky was gray and it was raining on the day I visited. Some of the tombstones had been broken by vandals. None of the ones belonging to my relatives had been disturbed, but the pathos of the scene (why would anyone want to deface a cemetery?) was somehow absorbed into the towering image of grief in the center: an ironwork religious scene depicting the Crucifixion, with Mary and John grieving at the foot of the cross.

The mausoleum at the Cathedral of Christ the Light in Oakland is totally different from these other examples. Rather than a site built up over time, it is a work of art in its overall design.

First, there is the entryway. One enters the mausoleum by passing through a corridor with a wall of water on each side (a continuously flowing fountain). Directly ahead the space opens up, and you see the central focus of the crypt: a stone altar table with a crucifix behind it.

The lighting is superb. One is aware of being underground, and the floor is slightly graded downward. Yet the space has a beautifully open feel due to its height and breadth. It is elegantly simple and airy.

Perhaps the most astonishing feature for me, however, is the skylight. Directly above the altar table is a round, translucent disk several feet in diameter, through which natural light filters down from the church above. In the center of this disk, directly above the altar table in the crypt, stands the main altar on which Mass is celebrated in the cathedral above. So when the coffin or urn is placed on the altar table for the final commendation (the last stage in the funeral rites) it lies directly beneath the place where Eucharist is celebrated in the church above. What a wonderful use of space to connect the ongoing liturgical center point of the church with the final commendation for the deceased.

Walking around the corridors of the crypt one can see the niches and vaults where people are buried. They are marked by name plates and dates, and sometimes adorned with flowers. Yet these tombs somehow avoid the unfortunate effect of “mailboxes,” as a friend of mine wryly termed the columbarium at her parish church. (She is now entombed in one of those “mailboxes” herself.) The term “columbarium” is charming (it suggests a dovecote), but the structures can look industrial. The popularity of cremation is growing, however, and we may see more artful examples of columbaria develop in time.

The mausoleum at Christ the Light, I am told, is quite popular. When I first saw it, I was very much taken with it. Now I find myself wondering however how this design will wear over time. The crazy-quilt of diverse styles that makes old cemeteries both intriguing and unpredictable is somehow more human than a globally planned artistic site, however beautiful.

On the other hand, there is that skylight….