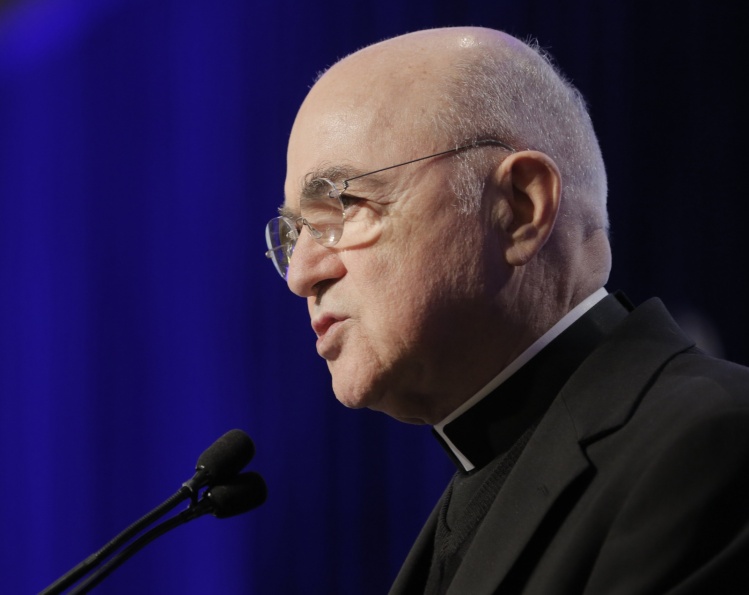 Archbishop Carlo Maria Viganò speaks during the opening of the 2015 fall general assembly of the U.S. Conference of Catholic Bishops in Baltimore (CNS photo/Bob Roller)

The summer of 2018 has been a long and trying one for the Catholic faithful. It began with allegations that former cardinal Theodore McCarrick was guilty of sexual misconduct with seminarians and of sexual abuse of at least one minor. Then came the Pennsylvania grand-jury report detailing seventy years of sexual abuse in six dioceses and cover-up by bishops. Capping things off was the release of an eleven-page “testimony” from Archbishop Carlo Maria Viganò, former nuncio to the United States, leveling sweeping charges against U.S. and Vatican church officials, including Pope Francis, for mishandling the claims against McCarrick. At the end of the letter, Viganò calls on Francis “to set a good example” and resign.

Viganò’s letter is a subjective account of recent church history full of unverifiable claims; its petty and self-righteous tone is that of someone out to settle personal scores. He points to the supposedly malign influence of the Jesuits, from Robert Drinan to James Martin. He rages against “homosexual currents” in the church. Perhaps more persuasively, he provides a detailed account of his and others’ attempts to inform John Paul II and Benedict XVI about McCarrick’s abuse of seminarians and young priests. But the most explosive claims are that Benedict had “sanctioned” McCarrick, barring him from public ministry—and that Francis, who supposedly knew of McCarrick’s misconduct, lifted those sanctions and turned to him for advice on the appointment of several U.S. bishops and cardinals.

Within days of the letter’s release, these last accusations began to fall apart. Viganò contended that Benedict had imposed “canonical sanctions” on McCarrick preventing him from celebrating Mass in public, traveling, or participating in public meetings. But journalists uncovered ample evidence that from 2009 or 2010, when Viganò claims such sanctions were imposed (he cannot remember the exact year), until Benedict’s resignation in 2013, McCarrick continued to do all these things and more, maintaining a robust public profile that included television appearances, trips to an array of countries, and participation in ordinations. He was photographed being greeted warmly by Benedict at the Vatican. At a 2012 gala dinner honoring McCarrick, Viganò himself lauded the former cardinal as being “loved by us all.”

Francis should do more than respond to those who “seek scandal” with “silence,” as he put it in a recent homily.
sharetweet

Now even Viganò’s allies have cast doubt on his account of these “sanctions.” Edward Pentin of the National Catholic Register reported that a source close to Benedict told him that “the instruction was essentially that McCarrick should keep a ‘low profile.’ There was ‘no formal decree, just a private request.’” In other words, there seem to have been no “sanctions” for Francis to lift. The only decisive actions taken against McCarrick by a pope have been those of Francis, who in July stripped him of his red hat and ordered him to a life of prayer and penance. As for Viganò’s claim that McCarrick influenced Francis’s episcopal appointments, you don’t need a conspiracy theory to explain why Francis would name bishops and cardinals friendly to his own agenda, as opposed to Viganò’s. Calls for Francis to resign on such paltry evidence are plainly not justified.

Viganò’s claims should also be read in light of the fact that Pope Francis fired him as nuncio in 2016. As more has been uncovered about Viganò’s judgment and associations—not least his alleged role, which he denies, in ending an investigation into sexual misconduct by former St.Paul-Minneapolis archbishop John Nienstedt—doubts have only grown about his intentions. By sharing the letter with right-wing donor Timothy R. Busch of the Napa Institute before it was published, and breaking his silence to grant interviews to conservative Catholic publications, Viganò gives the appearance of orchestrating a vindictive campaign against Francis, not of honestly trying to instigate reform.

But Francis should do more than respond to those who “seek scandal” with “silence,” as he put it in a recent homily. When he was first asked about Viganò’s charges during an in-flight press conference on his way back to the Vatican from Ireland, he replied, “I will not say a single word on this.” And he hasn’t. That is unwise. However dubious or questionable Viganò’s charges, Francis should respond to them directly, especially given that a number of the claims refer to private conversations between the two men. If Francis did not know about Benedict’s request that McCarrick should keep a low profile, he should say so. If he is afraid of implicating his two predecessors, who promoted McCarrick and allowed him to continue in public ministry, he shouldn’t be. The truth is more important. As the church once again reckons with its leaders’ failures to confront and punish abusers, the faithful deserve answers.