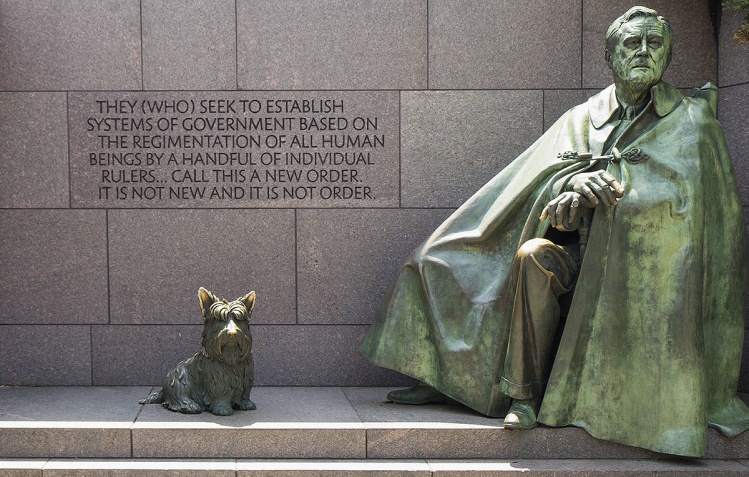 My wife and I were recently summoned to Washington, D.C., by our son and his wife for babysitting duties. Our granddaughter, Cora, has just turned two. She is perfect, of course, but she is two, and brandishes the word “No” with the authority of a stern nurse. On our day off from babysitting, we decided to visit the Franklin Delano Roosevelt Memorial. I think I first heard about the memorial, which opened in 1997, from Commonweal’s good friend Mark Shields. He recommended visiting it on the PBS Newshour, and as usual what he said was true.

The park-like memorial is a bit off the beaten path, spread out across 7.5 acres between the Tidal Basin and the Potomac River and the Jefferson and Lincoln Memorials. As luck would have it, the August heat broke and it was a perfect day to be outside, with temperatures in the seventies and almost no humidity. Ideal for slowly walking around the memorial’s monumental red granite walls, which are engraved with quotations from FDR as well as Eleanor, and its dramatic sculptures, waterfalls, and pools.

A bronze sculpture of Roosevelt in his wheelchair is the first thing visitors see. Children scramble up onto Roosevelt’s lap, where the bronze has been polished to a bright gold by human contact, while adults pose beside the statue for photos. Curiously, when the memorial first opened there was no depiction of Roosevelt in a wheelchair, causing a good deal of controversy. That omission was eventually corrected, and the entire memorial is readily accessible to the disabled.

The memorial is laid out as four outdoor “rooms,” each chronicling the disparate challenges Roosevelt faced, from the Great Depression and the New Deal to the Second World War. Leonard Baskin and George Segal were among the renowned sculptors commissioned to bring Roosevelt’s legacy to life in metal. Particularly powerful are Segal’s life-size sculpture of a Depression-era breadline and Baskin’s bronze bas-relief of the four-term president’s funeral cortege. Perhaps even more compelling is Neil Estern’s larger-than-life sculpture of a seated Roosevelt draped in a cloak, his face contorted by disease.

Roosevelt knew that, contrary to his political opponents, government is indispensable in solving society’s most pressing problems.
sharetweet

Among the quotations engraved on the memorial’s walls there is Roosevelt’s famous enunciation of the Four Freedoms, his version of the American creed: “Freedom of speech…Freedom of worship…Freedom from want…Freedom from fear.” Nearby is his sobering warning made in the midst of the Second World War: “Unless the peace that follows recognizes that the whole world is one neighborhood and does justice to the whole human race, the germs of another world war will remain as a constant threat to mankind.” And his rallying cry in the depths of the Depression is also prominently featured: “The only thing we have to fear is fear itself.”

Visiting the memorial, one is awed at the enormous political challenges Roosevelt confronted and at how he somehow held a desperate country together in desperate times. At moments, he seemed to have preserved the union by the force of his personality alone, something one is reminded of by another Segal sculpture, that of a seated man listening to one of Roosevelt’s “fireside” talks on a radio.

Today’s political discord is of a different sort, but it has the potential to destroy much of what Roosevelt built on the foundation the nation’s Founders established. For that reason, perhaps, I was most struck by a quotation from Roosevelt’s second inaugural address: “The test of our progress is not whether we add more to the abundance of those who have much; it is whether we provide enough for those who have too little.”

In light of the lessons we clearly have not learned from the Great Recession, the full text of that address is still pertinent. “We have always known that heedless self-interest was bad morals; we know now that it is bad economics,” Roosevelt insisted. “Out of the collapse of prosperity whose builders boasted their practicality has come the conviction that in the long run economic morality pays.”

Roosevelt knew that, contrary to his political opponents, government is indispensable in solving society’s most pressing problems. “We refused to leave the problems of our common welfare to be solved by the winds of chance and the hurricanes of disaster,” he said of those who decried government intervention and business regulation as tyranny. “In this we Americans were discovering no wholly new truth; we were writing a new chapter in our book of self-government.”

My wife and I came away from the FDR Memorial chastened by the thought that it represents an inheritance now endangered, and one our granddaughter might be deprived of if the current president’s assault on democratic norms is not stopped. That inheritance will be secured only if Americans can take back the institutions of self-government from the manipulations of those who now have far, far too much.