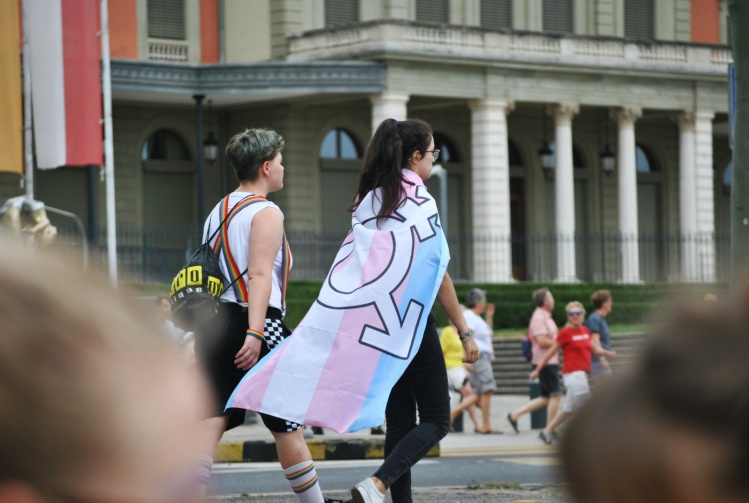 This is the continuation of a conversation about sex and gender prompted by Daniel Walden’s March 2020 article, “Gender, Sex, and Other Nonsense.” Paul Griffiths’s original reply can be found here. Interested in discussing this article in your classroom, parish, reading group, or Commonweal Local Community? Click here for a free discussion guide.

I’m grateful to Paul Griffiths for his close and critical engagement with my essay, and for this opportunity to clarify the arguments I made in it. I’ll begin by addressing his claim that a “Lockean” understanding of identity structures my thinking on these matters—far from it—and then turn to some of the other issues he raises, which I hope will reveal more agreement between us than might be expected.

Though I’m aware writers don’t choose their headlines, I still found it telling that Griffiths’s response was given the (not inaccurate) title “Gender & Identity”—the latter being a word I intentionally avoided. Indeed, the single use of “identity” in my essay was in apposition to “life story,” a term that I think much better captures what happens within and between human beings as we come into a mature understanding of ourselves. This is not the static, abstract “this-ness” connoted by “identity,” but something that emerges from narrative—that is, it comes from our need to talk about subjects who in some ways are in flux and in other ways stable. The narrative of growing into adulthood that I offered is not a narrative of acquisition but of recognition: a person is an adult to the extent that the story they tell about themselves is taken seriously by other people. We listen with a certain amused delight as a child tells us that they intend to grow up to be a spacefaring superhero with ice breath and laser eyes, but we don’t take it seriously. When that child, now grown to maturity, says that they would like us to revise how we talk and think about them, this is something we cannot simply dismiss: we have an obligation to understand them in a way that we didn’t when they spoke as a child. Griffiths treats this as a predictable capitulation to our culture’s false assumptions about self-ownership—and thus, finally, an argument for granting individuals absolute authority to “dispose” of themselves as they see fit. That wasn’t what I was suggesting at all. Instead, I maintain that when we allow people to tell their own stories, we are acknowledging that they should fully participate in defining who they are through, with, and among other people: the way they tell their stories might be contested, but they can no longer be effaced or spoken over.

When we explicitly seek to revise other people’s interpretations of our acts, it’s an invitation to help us live more honestly.
sharetweet

Griffiths is correct that gender is constituted by acts, but he is wrong that a person’s performance of those acts is “exactly” their gender. Our acts are human acts, which is another way of saying that they are communicative on the levels of both sensuous and reflective life. Precisely what makes talking about gender difficult is that some gender-acts are petitionary—asking that a person be treated a certain way, talked about in certain terms, grouped and categorized with others in a certain way—while others are purely expressive, and a great many are both at once. It’s this expressive dimension to our action that necessarily is related to our inner lives—it is, in part, an attempt to communicate some of this interior life to other people. Unlike Griffiths, the Church does not neglect the importance of our interiority: we make public confession of having sinned “in my thoughts and in my words, in what I have done and in what I have failed to do.” Griffiths seems to forget that I write as a Christian, and what Christians find when they turn inward is not Griffiths’s “glassy essence” but conflict and uncertainty—conflict between our professed desires and our actual ones, and uncertainty about what sort of person we are and whether we are acting rightly, both arising from the sin that is our common patrimony.

Because gender-acts mean something, because they communicate something, they admit of truth and falsehood. This makes them morally significant for Christians, who are called to avoid bearing false witness to whatever extent we can. This duty to be honest in our relationships with others and to eschew falsehood is, I think, very different from a disclosure of privileged knowledge. In order to live honestly through our acts, including our gender-acts, we need the cooperation of other people, because we need them to understand what it is that we’re attempting to communicate. When we use our speech to intervene in their social-interpretive processes—that is, when we explicitly seek to revise other people’s interpretations of our acts—it’s an invitation to help us live more honestly: we’re asking them to really listen to the story we tell, and join us in making new sense of those acts. Because meaning is not separable from the linguistic context in which our actions take place, those actions are signs whose meanings we can contest negotiate, and rearticulate in the same way that we contest, negotiate, and rearticulate the meanings of our speech. They become part of the way we make meaning in a community and the way a community makes sense of us—sites of mediation between the inaccessible realm of personal interiority and the necessarily public realm of meaning. All this may still strike Griffiths as having the grammar and syntax of “Lockeanism.” To that I can only confess to being a philologist and not a philosopher. The grammars I command are linguistic rather than theological, but I trust that I have used this small mastery to make my point clear.

Despite all this, I think Griffiths and I fundamentally agree about the real importance of gender acts, because like other acts they express a gift of personhood, the presence and outpouring of the image of God. In this respect, their very expressive quality is itself a good, one that comes from offering a truer way of relating to one another and petitioning for the gift of mutual understanding. I was particularly struck by the line he draws between gender and prayer, which I think is an illuminating one: prayer, more than anything, demonstrates that the very expression of our desires is itself good, for in honest prayer that asks for what we really want, we open ourselves to God’s fulfillment that slakes the truly human desires that end in God and fills the gaps and empty spaces that give birth to desires that are self-serving, destructive, and otherwise inimical to our humanity: this is the root of Herbert McCabe’s exhortation, which remains the best advice for improving one’s prayer life that I have ever heard, to pray for what we actually want. It is a mighty work of God that transgender people offer the gift of their personhood in the face of terrible risks to life and health that our sin imposes on them, and the only Christian response to such a gift, as I think Griffiths would agree, is gratitude and praise to the Lord of Hosts and the gift of ourselves in return.

Daniel Walden is a writer and classicist. He spends his time thinking about Homeric philology, Catholic socialism, musical theater, and the Michigan Wolverines.