Does He Even Have One?
By Jonathan Stevenson
Election 2016
Foreign Affairs
Immigration
Middle East
Terrorism 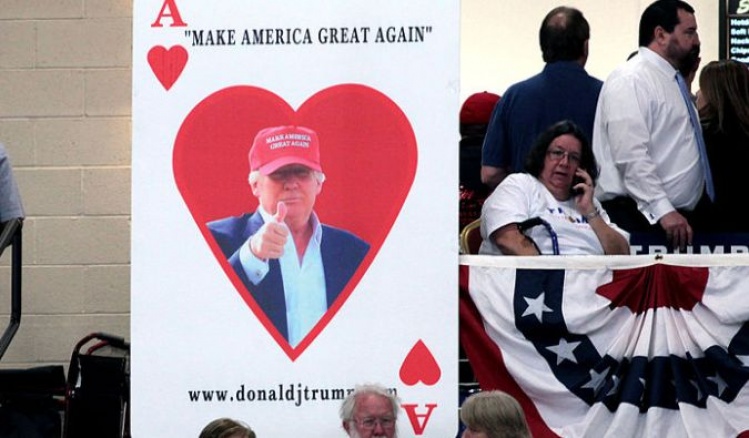 The word “policy” appears above in quotation marks because in any proper understanding of the word, Donald Trump has none. A real foreign policy calls for empirical rationality, logical coherence, and careful forethought; what Trump offers is a set of fatuous, swaggering reactions that he trots out in response to various topics in international relations.

Privileging “unpredictability” in foreign affairs, he would not take nuclear weapons off the table for use against the Islamic State (ISIS), but instead would keep the group guessing just what he means by his vow to “bomb the shit out of ‘em.” He believes “torture works” and promises to revive waterboarding and worse. In addition, he dismisses NATO as “obsolete” and the UN as “a political game” that does not “settle anything.” He would build a wall along the United States’ southern border to stop illegal immigrants from entering the country, demanding that Mexico pay for it, and bar Muslims, including Syrian refugees, from entering the United States.

Trump’s pronouncements are often flagrantly self-contradictory. Taking down ISIS isn’t the United States’ fight, he says, and Russia’s intervention was welcome—yet U.S. forces might be required to “knock out ISIS” by deploying thirty-thousand ground troops in the Middle East and establishing safe zones. Proliferation is “the biggest problem … in the world,” but Japan and South Korea should be free to develop their own nuclear weapons because the United States can’t afford to continue to be “the policeman of the world.” And on and on. The boastful ignorance and recklessness with which he addresses international affairs seems part of a larger calculated know-nothing posture designed, with cynical condescension, to appeal to a portion of the electorate that is, sad to say, as ill-informed as he on foreign affairs.

From the start of his campaign, foreign-policy professionals have dismissed Trump as a charlatan and a fool. He is both, as well as a demagogue. Yet this demagogue and fool might actually end up being the Republican presidential nominee. How worrying is this? If Trump were to be elected president—and, fortunately, polls suggest that this is highly improbable—he would, like all presidents, receive prompt briefings from the State Department, the Defense Department, the intelligence community, and the Justice Department. These briefings would apprise him of the legal and political constraints under which the United States must operate. Such appraisals might help to inhibit him, as they have other rhetorically strident newcomers to the White House (notably Ronald Reagan).

Nevertheless, Trump’s imperiousness and impetuosity could prompt him to consider rash executive action. It’s not hard to imagine President Trump, confronted with an ISIS terrorist attack in the United States, vowing to take off the gloves in the fight against ISIS, and calling a National Security Council meeting to determine what measures to implement. He might request options for pulverizing ISIS’s Syrian capital Raqqa and other targets, regardless of civilian casualties, or for deploying tens of thousands of ground troops to finish off ISIS’s supposed caliphate. Yet the Cabinet-level military, diplomatic, intelligence, and homeland-security officials convened to advise him would likely provide some rather deflating responses. He would hear trenchant admonitions that indiscriminate bombing and a U.S. ground intervention would only inspire wrath and disdain in the Islamic world, spurring ISIS recruitment. He would be informed that ISIS battlefield losses in Iraq and Syria would actually encourage more out-of-area terrorist operations. And the lawyers would probably tell him that enhanced interrogation would be legally unsustainable and politically risky.

Might Trump’s handpicked national-security officials not form a countervailing cabal that could outweigh career diplomatic, defense, and intelligence officials? That is essentially what happened in George W. Bush’s administration after 9/11, when Vice President Dick Cheney and Secretary of Defense Donald Rumsfeld steamrollered both the State Department and CIA analysts in marching the United States into Iraq on the pretext of Saddam Hussein’s illusory weapons of mass destruction. In turn, cynical White House lawyers certified forms of “enhanced interrogation” that even a conservative Supreme Court would have found unconstitutional. But the foreign-policy failures that followed brought condemnation of the level of executive license indulged in Bush’s administration, and showcased the bitter consequences of his senior officials’ willful obliviousness to inconvenient facts. Once bitten twice shy, the civil servants who execute presidential directives would not acquiesce so easily this time around. Wide bureaucratic resistance would likely rein in President Trump.

On broader and more far-reaching strategic issues, the bureaucratic friction would be even greater. American dedication to traditional alliance structures and to an international security architecture that the United States itself built after World War II is deeply ingrained. Despite Trump’s glib inanities, an insular martial state is no substitute for an international order resting on NATO and the UN. Rumsfeld tried to push NATO’s irrelevance during the Iraq War, when he obdurately distinguished a “new Europe”—one that would join the U.S.-led “coalition of the willing”—from a timid “old Europe.” It didn’t wash then, and makes even less sense now, when a strategic challenge from a revanchist Russia has arisen. And even Trump would, as president, be compelled to appreciate the UN’s utility as a political mediator of complex conflicts (e.g., in the Geneva talks on Syria) and a mechanism of security in places of low American priority, like sub-Saharan Africa. The U.S. military in particular would be hard-pressed to countenance casual bellicosity from Trump as president. The Pentagon has resisted wholesale U.S. intervention in Syria at least as stiffly as other agencies, including the State Department.

To be sure, it’s unsettling to contemplate how the mish-mash of contradictions that make up Trump’s worldview might translate into action. By his own terms, President Trump would be iconoclastically anti-alliance and anti-internationalist, yet willing to use military force more robustly than his predecessor—though economical with America’s defense resources and opposed to a policing role. Such jangled bases for policy might lead his administration to enter battle without traditional diplomatic and political cover, with an unrealistic eye to quick victory and exit. Regarding nuclear weapons policy, nobody seems to have told Trump that brandishing the nuclear option as a retort to terrorism is the kind disproportionate threat, devoid of credibility, that went out with the ineffective “massive retaliation” doctrine of the 1950s. The flamboyant nuclear strategist Herman Kahn liked to quip that it helps to “look a little crazy” in a game of chicken. That was then, a strange and unusual moment when the United States and the Soviet Union could get away with it via large buildups of nuclear arms, the potential use of which was practically foreclosed by the doctrine of mutual assured destruction. But it is folly to play the maniac against suicide bombers or quixotic leaders demonstrably willing to attack and die, and ethically unacceptable to threaten collateral damage to innocents as a means of effecting deterrence. ISIS’s leadership would likely regard Trump’s threats of nuclear attack as laughable, and a boon to its own cause, while seasoned experts would disabuse Trump of their utility.

In the thick of the national security decision-making process, Trump would likely be dissuaded from acting with the emphatic capriciousness that has been his stock in trade as a campaigner. In the end, the American people would be stuck with a White House subject to substantially the same constraints that any other one would have been, but without a coherent policy or a strategic vision. George W. Bush had both policy and vision; it was their unsoundness that made his presidency a disaster. Bush can still be described as a decent man surrounded by megalomaniacal advisers. Trump would simply be a megalomaniac humbled by the real world—a world of which, until he became president, he had never really been a part.