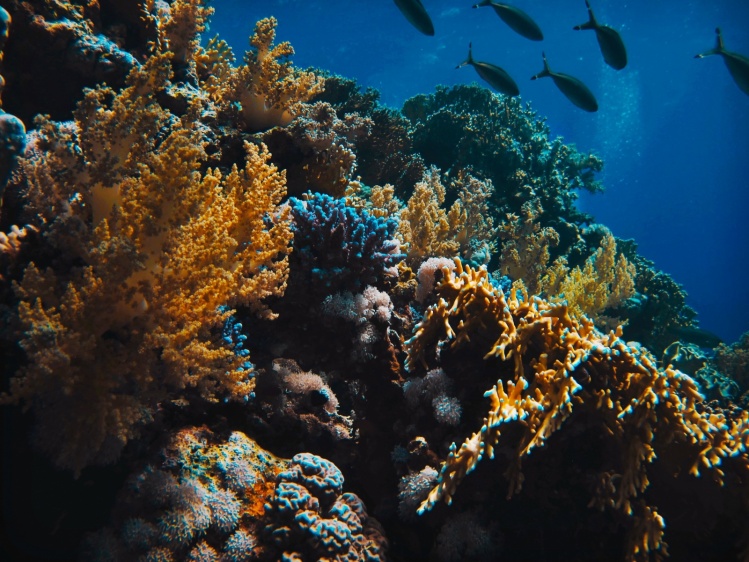 Coral reefs are special places. They can enchant, inspiring tourists and scientists to travel hundreds, even thousands of miles for just a few moments of underwater bliss. But reefs are also sites of death and decay, reminders of the damage humans continue to inflict on the environment. Few know these contradictions as well as biologist Peter F. Sale, author of Coral Reefs: Majestic Realms Under the Sea. Part memoir, part popular science, part call to action on climate change, the book makes a compelling case for why coral reefs deserve more attention. Sale’s argument is as simple as it is powerful: as coral reefs go, so goes the rest of the planet.

Sale grew up playing in tide pools along the Bermuda shore, and his prose frequently communicates a childlike sense of wonder. That’s not surprising, as coral reefs are indeed majestic. Their growth requires millions of years, and their continued existence depends on an improbable alignment of geology, biology, oceanography, and climate—“serendipity in deep time,” Sale calls it. More process than product, a thriving reef is less a static object to admire than a living being to encounter.

If you look closely at a coral reef (or any ecosystem for that matter) there is simply a lot to see. A single coral specimen that can fit into a five-gallon bucket can house more than a thousand individual polychaete worms of a hundred different species; gobies, a type of small fish that shares the burrows of alpheid shrimps, offering protection from predators in exchange for a comfortable home (complete with a roommate); and some fish larvae that swim so quickly they can travel up to thirty body lengths (sixty centimeters) in a single second. A coral reef is an exciting place to be.

Throughout Coral Reefs, Sale’s personal, familiar tone provides a welcome complement to his scientific rigor. Among the many highlights is his hilarious description of Pacific reef cleaning stations, which Sale cheekily compares to the shady Mos Eisley Cantina from Star Wars. In these “wretched hives of scum and villainy,” Machiavellian cleaning fish “tantalize client fishes with gentle tactile stimulation…and regularly cheat.” Other examples are more poignant. Sale recounts the long journeys made by reef fishes after their dispersal as larvae in the open ocean. Overcoming powerful ocean currents, they’re able to locate and successfully return to their home reefs over remarkably long distances. “I well remember when I first read [about it]” Sale tells us. “I sat there stunned.”

Sale is not a religious believer, but his vocabulary often gestures toward the transcendent. Phrases like “exuberant richness” and “sheer wondrousness” recur throughout the book. Writing rapturously, Sale goes on to describe coral reefs as “the Other,” “magical place[s]…of fantastic otherworldliness.” Might he perceive some kind of divine life operating in this corner of creation? We can’t know for sure, but the theological implications of Sale’s language are revelatory: for believer and non-believer alike, reefs are sacred spaces, where scientific certainty gives way to mystery and awe.

Large corporations have been allowed to wield so much influence, and with so little oversight, that reef ecologists, activists, and coral reefs themselves never really stood a chance.
sharetweet

Sadly, these sacred spaces are not long for this world. Even if we manage to limit the rise in average global temperature to 1.5 degrees Celsius, the U.N.’s Intergovernmental Panel on Climate Change warns of inevitable devastation: coral reefs “are projected to decline by a further seventy to ninety percent.” That’s merely the best-case scenario. More likely is that coral reefs as we know them will all but cease to exist by 2050. Sale states this fact with palpable grief, in contrast to his earlier enthusiasm: “The ecosystem to which I have devoted my career is very likely to disappear from the planet about the same time as I do.” It’s not easy reading.

In the book’s final chapters, Sale turns his attention to the challenges of climate inaction and coral reef conservation. Here, though, his efforts to make sense of this tragic situation are not wholly satisfying. Sale argues, for example, that Exxon Mobil’s well-funded climate disinformation campaign during the years 1989–2010 managed to persuade the public to ignore clear and abundant evidence of a warming planet simply because its opposition was inept—as if the failure were the fault of writers alone. Sale derides scientific writing as “seldom enjoyable,” while he judges popular reporting on science “confusing” and “contradictory.” Most people, Sale believes, are not invested or educated enough to overcome these obstacles. That may be partly true, but it’s not the whole story. What Sale neglects to mention is that the success of climate change denial was the logical, even predictable outcome of a particular set of political and economic structures whose short-run interests conflict with the common good. The problem is not that scientific writing is “boring.” It is that large corporations have been allowed to wield so much influence, and with so little oversight, that reef ecologists, activists, and coral reefs themselves never really stood a chance.

A more glaring omission, though, is Sale’s neglect of the impact of coral reef decline on impoverished populations throughout the world. Yes, the ecological destruction of reefs is tragic in its own right. But coral reefs are also a crucial source of food and livelihood for millions of people living in developing countries, where other economic opportunities are scarce. Sale has drawn attention to the inequitable consequences of coral reef decline in other venues, so it was surprising that such stories are almost completely absent from this book. That’s a mistake. Any ethical discussion about coral reefs (or other vulnerable ecologies, for that matter) must take account of the millions of people whose lives and livelihoods are bound up with the health of these ecosystems.

Still, it is worth stating that all natural ecosystems are intrinsically valuable in their own right, independent of their utility to humans. Everything in nature, even animals as annoying as mosquitoes (and I confess, I’ve slapped a great many of them), has purpose and dignity. Coral reefs, perhaps more forcefully than other ecosystems, remind us that everything is connected. Despite its flaws, Coral Reefs remains an entertaining and informative read. If it helps even a few readers fall in love with these incredible ecosystems, it will have done its job. After all, conversion (ecological and otherwise) has much more to do with falling in love than with scientific argument.

Bryan P. Galligan, SJ is a research and policy analyst at the Jesuit Justice and Ecology Network Africa (JENA) in Nairobi, Kenya.