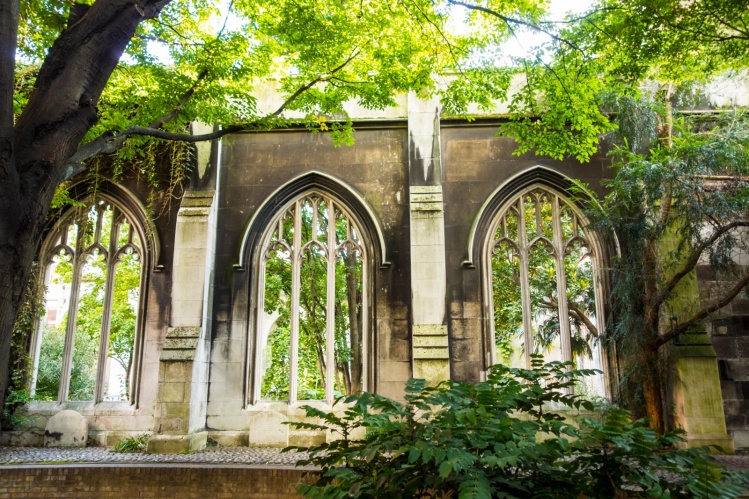 Laurence Olivier’s camera pans across an abstract, Technicolor land of painted hills and wooden windmills, crops grown unkempt, trees and bushels covering ploughs, clover running amok. We see a tumbledown stone house with two peasant children in rags before the camera finally rests on a fairy-tale castle, like an illustration from a medieval book of hours. The Duke of Burgundy (Valentine Dyall) sonorously declaims:

Should not in this best garden of the world,
Our fertile France, put up her lovely visage?
Alas, she hath from France too long been chased,
And all her husbandry doth lie on heaps,
Corrupting in its own fertility.
(William Shakespeare, Henry V, V.ii.36–40)

This scene, near the end of Olivier’s 1944 film version of Henry V, becomes a potent metaphor for Britain in the midst of war: its major cities reduced to smoking rubble, willow herb and fleabane taking root in the debris, bombsites turned into impromptu gardens. The British government commissioned the film, and it premiered November 22, 1944—less than six months after D-Day. London must have seemed a wild, ruined garden to the audiences watching this scene. Whole swathes of the metropolis lay “on heaps,” destroyed by the Luftwaffe’s bombs.

The wreck of the nation’s capital, however, also led to the creation of unexpected vistas. Writing in 1945, the architect Hugh Casson thought a bombed building could be “a place with its own individuality, charged with its emotion and atmosphere, of drama, of grandeur, of nobility.” A group of influential figures that included T. S. Eliot, Kenneth Clark (director of the National Gallery), and the economist John Maynard Keynes argued that a few of these ruins—specifically, destroyed London churches—ought to be preserved as war memorials. Otherwise, they warned in a 1944 letter to the Times, “no trace of death from the air” would be left “to remind posterity of the reality of the sacrifices upon which its apparent security has been built. These church ruins, we suggest, would do this with realism and gravity.”

Even before the war was over, people were already thinking about how it should be remembered. Remarkably, in the blaze of rebuilding that transformed London during the postwar period, making it the city we know today, the people who signed that letter to the Times got their way: the church ruins were preserved.

Most of the City’s generic architecture is as impersonal as the digits and codes that propel trade across the globe to New York, Frankfurt, Tokyo.
sharetweet

I encountered them for the first time as I was wandering the streets of the City of London, where half a dozen churches remain as hollow shells, potent physical reminders of the Second World War in the financial heart of London. These carefully preserved ruins are surrounded by glass-and-steel skyscrapers, which are themselves testaments to the destruction of the Blitz, often built on spots razed by aerial bombardment. Working for the summer in the City, I escaped the office on warm evenings to find these puzzling, evocative relics.

The stone walls of St. Dunstan-in-the-East are covered in dark green creepers. Down the nave, there are small trees where columns once stood. In the day’s last shoots of sunlight, it seems like an oasis of peace. In a short, anonymous article published by Country Life in 1945, one critic neatly summed up the themes suggested by the garden in St. Dunstan-in-the-East. The church operates, he wrote, as “a memorial of the actual destructiveness of war, partly as the shrine of a memorial garden and partly for aesthetic contrast with the streamlined buildings of the new City.” It is the “aesthetic contrast” that is most striking today. Surrounded by gigantic office blocks spread out over more than a square mile, the church now sits in a district synonymous with international finance. Most of the City’s generic architecture is as impersonal as the digits and codes that propel trade across the globe to New York, Frankfurt, Tokyo.

It was a relief, then, to discover the humanely scaled St. Dunstan-in-the-East, hinting toward a past the City seems eager to forget. As one traces the gray paving, it’s hard to imagine the torrent of high explosives that rained down in 1941 and consumed the church’s interior. In March 1942, the architectural historian J. M. Richards described the morning after a bombing, noting “that peculiar air-raid smell of wet charred wood” and “the blundering gait with which we picked our way over puddled streets criss-crossed with hoses on dark winter mornings…the familiar houses we saw splintered with impressive thoroughness into a spillikins heap of dusty timbers.”

The chill must of winter seemed very far away on that summer evening I spent in St. Dunstan-in-the-East. Yet in Richards’s language, we can reach back to a moment when the church was not a quiet lunchtime spot, but another fresh ruin joining tens of thousands of others. The high steeple, designed by Christopher Wren, was badly damaged by the bombing and had to be restored in 1953. The garden itself wasn’t planted until 1967, but it followed the principles advocated in the rich and fascinating booklet Bombed Churches as War Memorials, issued by the Architectural Press in October 1945. 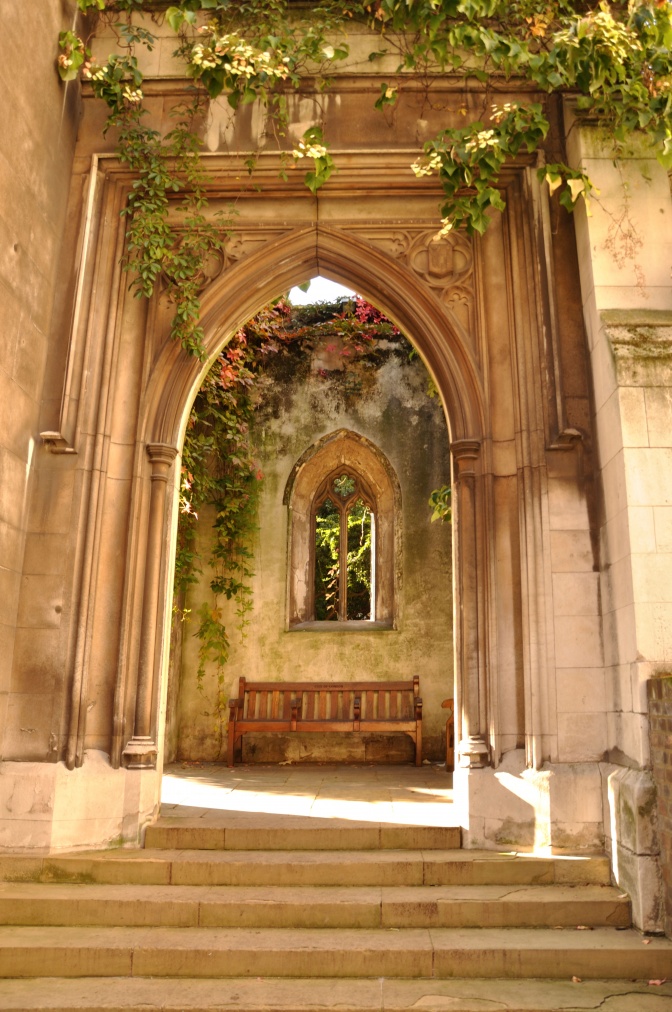 In the booklet’s foreword, the Very Reverend W. R. Matthews, then the Dean of St. Paul’s, claimed that “the devastation of war has given us an opportunity which will never come again.” This optimism echoed sentiments expressed during the war itself. The country would turn bombsites into social housing and hospitals, with a few churches left as memorials to the carnage of the home front. (As Brian Foss has pointed out, it wasn’t until September 1941 that frontline casualties outnumbered civilian deaths in Britain.) The short booklet is full of halftone illustrations, architectural plans, and garden plans, showing how to transform destroyed buildings into “ruins.” In one article, Hugh Casson argued that “every stone—whether fallen or in place—is a fragment of the past, part of the pattern of history.” Churches such as St. Dunstan and Christ Church, Newgate Street, scarred by the Great Fire of London and the Blitz, are now living monuments not just to the bombs and fires, but to London’s long history of transformation. Casson worried about a time when “all traces of war damage will have gone, and its strange beauty vanished from our streets...and with their going the ordeal through which we passed will seem remote, unreal, perhaps forgotten.” These precious City survivals are meant to be a guard against forgetting. They embody the trauma and mass destruction that are all too easy to forget in placid twenty-first century Britain. Apart from these ruined churches, you will find only small brass plaques marking the spots where historic buildings once stood before being annihilated by “Enemy Action.”

Christ Church, Newgate Street, near the London Stock Exchange, is perhaps the most visible of the ruined churches in the City. It was one of the churches identified by the Architectural Press as worthy of being preserved in its desolation. The landscape architect Brenda Colvin proposed that the plants and flowers at Christ Church should mirror those seen blooming spontaneously amid bombed houses, and all three writers in the booklet—Casson, Colvin, and the Czech architect Jacques Groag—were in agreement that the garden should be wild and disheveled. Casson emphasized “how much pleasanter would these garden ruins be...than the usual little municipal park with its geometrical patterns of unfriendly asphalt and forbidden turf.” Well, the City of London Corporation was never going to allow messy patches of grass and weeds. The new garden, opened in 1989, is tidy and tasteful, not at all what the contributors to Bombed Churches as War Memorials had in mind. Christopher Woodward, in his 2001 book In Ruins, regrets what he dubs the “corporation aesthetic” of the Christ Church ruins, wishing that they were instead “a little wilder.” Today Christ Church is a pleasant and tranquil corner of the City of London—but it is not really a bombsite, nor a hidden urban wilderness.

The mournful quality of London’s ruins is instead best caught in another book by the Architectural Press, The Bombed Buildings of Britain, first published in 1942 and then followed by an expanded edition in 1947. It is an obituary for England’s cities, containing hundreds of photographs of broken Gothic churches, demolished Georgian terrace houses, shattered palaces and museums. Compiled by J. M. Richards and John Summerson, both major architectural historians and theorists, it records “buildings whose loss is more profound than any transient beauty in their swan-song can compensate for.” The book is an elegy of an urban landscape disintegrating before the authors’ eyes, as the Luftwaffe and later the V-1 and V-2 flying bombs relentlessly pulverized it. The book’s images of smashed stone and wood are a powerful metaphor for the tens of thousands of civilians who perished from the night raids and the random death visited upon the English metropolis.

Richards writes that “storm and lightning, the death-watch beetle, Cromwell’s troopers, the speculative builder, mere obsolescence—and now German bombs,” have all contributed to the destruction and renewal of the country, an almost natural process, as certain as the changing of the seasons. It cannot be prevented, only accommodated and recorded. Buildings become like trees, with their centuries-long lifetimes. St. Dunstan-in-the-East is now a battered, three-century-old tree stump, surrounded by the charmless saplings of the new City.

Altair Brandon-Salmon read History of Art at Wadham College, Oxford, and is beginning a PhD at Stanford University on the history of ruins in Britain. 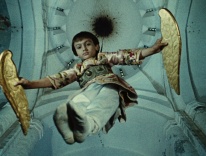