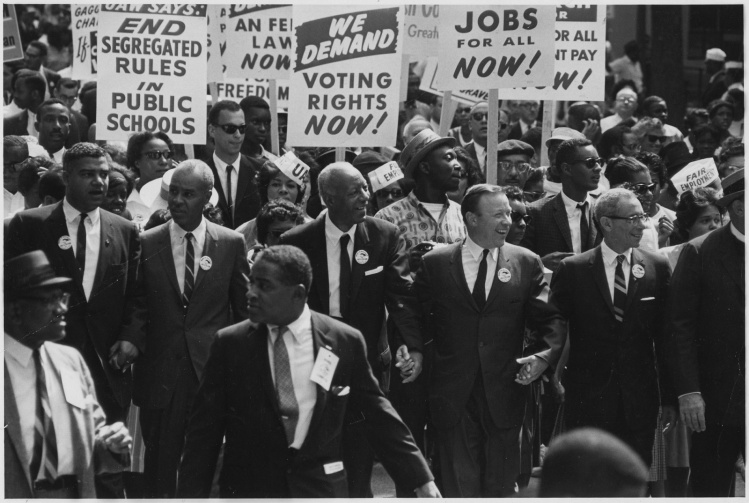 In his recent article “Race & Politics,” Paul Baumann argues that black Americans risk moral and political harm by rejecting out of hand white commentary and leadership on racial-justice issues. He points out that black Americans, like other marginalized groups, need to form egalitarian alliances with many stakeholders, including with sympathetic people among their oppressors.

Black people can’t do it alone. That black people as a minority population with no wealth need to form meaningful alliances to secure justice is obvious to the point of being a tautology. We do. Oddly, Mr. Baumann takes for granted that this necessity answers positively his question of whether white people have standing in the debate and work of racial justice. The more interesting point, for which he offers no supporting evidence, is whether white people are up to the task. The answer, I think, is a resounding “kind of”!

The crux of his argument hinges on an observation of black need and an assumption of abundant white capability. This is a common line of reasoning in white-liberal thought, one that exposes its lack of a robust humanism. Oppression dehumanizes the oppressor. Whiteness is not a coherent identity; it is a project. Its aim is, among other things, to provide a web of social, political, scientific, and theological justifications for injustice toward nonwhites: colonialism, slavery, dispossession, mass incarceration, and deportation. Whiteness brutalizes the souls of white folk.

It is in this context that we should ask not whether white people should contribute or even lead a racial-justice agenda, but where they are capable of doing so. First, white people need to recover their humanity. After half a millennium of self-professed and violently enforced racial superiority, they are simply incapable of engaging us as fully human by virtue of our exclusion from their race. Whiteness is itself the proof of full humanity in the West. To be white is to be human; to be human is to be white.

White people need to destroy the ideological and material infrastructure that renders their violence at once invisible and just. This, too, is racial-justice work. Mr. Baumann and other sympathetic white people would do better to strategize ways to undermine the material means by which we are materially vulnerable to the brutality of their less sympathetic counterparts. These are the moral tasks of all dominant groups vis-à-vis subordinated groups.

There is much work to be done. None of it, however, consists of dictating the terms of black liberation. If we start with the presumption of black humanity, our calls for self-determination would hardly be controversial. In the end, it seems that the Black Power activists Mr. Baumann recalls with displeasure were right: black people need to build black power; white people need to undermine white power. These are distinct tasks within the same project.

Reading Jo McGowan’s article “Why I Stayed, and Why I’m Leaving” (May 17) was a sad, sad experience. Sadness at the treatment her family received during her daughter’s funeral. But also sadness that a woman with McGowan’s obvious wisdom and sensitivity would base her stay-or-leave decision on the leadership deficiencies of the church’s hierarchy.

During this period of turmoil in the Catholic Church, I take comfort in Scripture. The biblical assessment of priests and priesthood is decidedly mixed. As often as not—in both the Hebrew and Christian writings—priests are linked to graft and oppression. Levi, the father of the Israelites’ priestly tribe, comes on the scene in Genesis as the co-instigator of a mass-murder revenge plot. For this crime the rights of the Levites within the clan of Jacob/Israel are forever circumscribed. The Book of Samuel describes a shake-down scheme by the sons of Eli, the priest at Shiloh. Would those whose offerings went to the Eli boys, rather than the altar of sacrifice, be surprised to learn that sexual predation has been added to the list of priestly sins?

Despite the many examples of deplorable behavior, the Scriptures ultimately conclude that a conservative-leaning priesthood is a necessity. The biblical record is clear: without some stabilizing influence the bastardization of worship is inevitable. Given humanity’s state of radical imperfection, there is an inexorable drift away from humble worship of the one true God toward the false, prideful, fetishistic practice of idolatry. Even Solomon, the wisest of the Israelite leaders, the builder of the temple, spent some time on the high places cavorting among the pagans.

Enter Jesus into the biblical story. He is the ultimate high priest. As Paul explains, Jesus emphasizes interior, rather than exterior, circumcision. Christ’s total submission to the will of the Father—expressed through life, death, and resurrection—constitutes the perfect act of worship. The quality of worship, then, remains the key criterion on which the Catholic Church should be judged. Does the church, despite its many faults, continue to provide a meaningful ritual through which the imperfect faithful can join themselves with Christ’s perfect worship?

I realize parish-shopping is much easier in Catholic-heavy New Jersey than in India. I have a wide variety of choices available within a ten-mile radius, and for this reason I am much more likely to hunt for a new parish instead of a new church. Currently, however, I feel no pressure to change. My wife and I are blessed with a parish that consistently conducts well-planned, well-executed worship services. We also like belonging to a parish where women have significant leadership responsibilities. Would our parish be even stronger if women were allowed to preside at Mass? I’m sure it would. And I look forward to the day when this occurs. Meanwhile, I encourage McGowan and the other members of the Catholic exodus to see worship as the best touchstone with which to evaluate any religious community.

Peter L. P. Simpson's article on the medieval theologian John Duns Scotus (“Have You Tried Scotus?” June 14) came as a breath of fresh air calling to mind the open windows of Vatican II. It was marvelous to see Simpson quote "Duns Scotus's Oxford" by another subtle thinker, the Jesuit priest and poet

Gerard Manley Hopkins, who admired Scotus as “Of realty the rarest-veinèd unraveller.” In a book titled Hopkins, The Self, and God, another Jesuit, Fr. Walter J. Ong, paid tribute to Scotus's emphasis on the individuation of all things in creation “in all their totally particularized, existential density”—this in contrast to the drive toward universals emerging from theologies saturated by the writings of Plato. God's creation is not an otherworldly, universal form, but rather the complex, evolving cosmos that we encounter in our actual existence. This emphasis on particularity and complexity affirms Simpson's insight that what we need is not a replacement of Aquinas by Scotus, but rather an opening in our thinking that allows us to go our own individuated ways while affirming our faith in Christ; in ways that move with the richness of our tradition's thinking, both past and present, as we face into the future with trust in God.