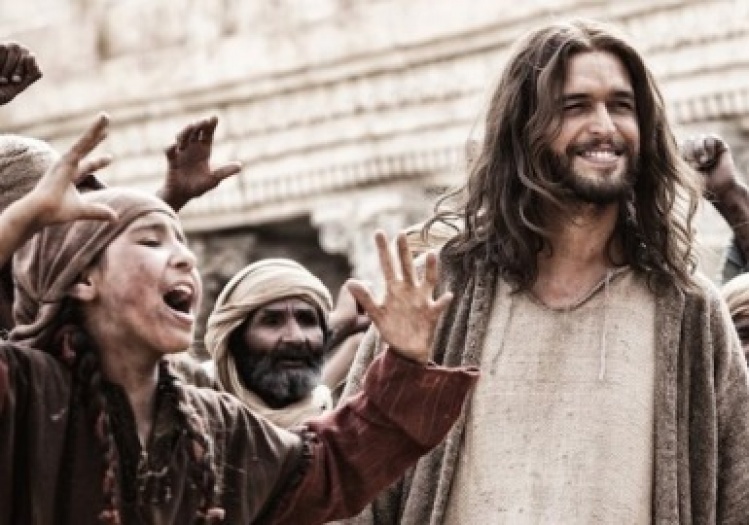 The evangelistic fervor of producers Mark Burnett and Roma Downey and director Christopher Spencer is evident throughout Son of God, the culmination of their very popular History Channel miniseries The Bible. But, alas, so bombastic is the filmmaking, so lacking in nuance, freshness of approach, and richness of characterization, that I felt I had been clamped to my theater seat by a muscular, stentorian preacher who could only bellow passages from the Gospel of John (the script’s main source, though not to the exclusion of the other three accounts), while never once persuading or moving me. At the same time, there is also a certain insecurity detectable in the movie. Son of God has the dubious distinction of being both headlong and wavering, one-dimensional yet somewhat dodgy in its adaptation of a testament that is usually lucid, sometimes mysterious, but always vibrant.

Most of the familiar passages are on the screen but feel truncated. Director Spencer seems to have taken to heart the old Hollywood dictum “Cut to the chase,” so that every scene begins near its climax without the buildup that would make it more effective. For instance, in the Lazarus episode (John 11), the text tells us that the dead man’s sister reproached Jesus for not arriving in time to cure her brother, and the Lord “raged at his own spirit and harrowed himself” (in Richmond Lattimore’s translation). How moving, how utterly human, and yet how puzzling for the Son of God, with celestial powers at his instant command, to take time to torment himself at the death of a friend. And what a marvelous challenge for the actor. But in this movie, Christ hears the bad news and—cut—we’re at the tomb and—presto!—Lazarus is raised. I’m not reproaching the filmmakers for excluding my favorite moments; it’s just that their storytelling is so precipitous it robs the drama of oxygen.

Camerawork and editing reinforce the lack of subtlety. Though the Moroccan locations should have worked well, with harsh, rocky hillsides serving as counterpoint to the preachments of love, they serve little purpose in a film that relies on a virtually unending and unvaried succession of close-ups. Instead of choreographing the crowd scenes, the director simply gives us screaming, sweating, or swooning faces. In indoor scenes, the predominance of close-ups leads to confusion when we can’t tell where the actors are standing in relation to one another. And the Crucifixion is robbed of its power when the camera is positioned so close to Christ’s face that the imagery becomes more dental than dramatic. To be sure, Carl Dreyer filmed his great The Passion of Joan of Arc mainly in close-up, too, but his tact and skill made the result a transcendent experience, not visual hyperventilation.

Maybe the concentration on faces was intended to avoid emphasis on bodily gore, in contrast to the excesses of Mel Gibson’s The Passion of the Christ. Yet the writers have added moments of bloodshed that don’t exist in the gospels. There is a scene of Pilate practicing his swordplay with a gladiator and then slashing the disarmed man’s face. (A fine way to treat one’s personal trainer!) We also see Simon Peter bashed about by Caiaphas’s guards after he denies Jesus, when it would be much more moving to have an unscathed Peter quietly realize his faithlessness and—as Matthew has it—go out and “weep bitterly.”

It’s not only Mel Gibson’s violence that Son of God tries to steer away from, but also the charge of anti-Semitism his movie attracted. Co-producer and actress Roma Downey (her portrayal of the Virgin Mary, along with Greg Hicks’s Pilate, provides the only satisfactory acting) has spoken convincingly in radio interviews of her intent not to offend non-Christians, but the inclusion of Christ’s arrest and trial by the high priests (and how can those scenes be omitted?) makes controversy just about unavoidable in a post--Holocaust era.

The filmmakers have resorted to certain stratagems: Caiaphas’s prosecutions of Christ are here countered by the compassionate Nicodemus, and the actor playing Caiaphas comes across less as a genuine enemy than as a high- school principal sincerely disturbed by a misbehaving student. But the script’s main solution to the anti-Semitic problem is to emphasize Caiaphas’s understandable fear of Roman intolerance of any social disorder. Consequently, the prosecution of Christ is seen as forgivable appeasement, not sectarian vindictiveness. However, this approach doesn’t quite work. Cruel as Pilate may be (witness that slashed gladiator), his cruelty is beside the point when it comes to the fate of Christ as shown in this movie. Following the gospel, the script has the governor reluctantly pronouncing his verdict only after he has questioned the priests about the need to do so.

Similarly, since the figure of Judas has been inflated by anti-Semites into a vile archetype of the eternally treacherous Jew, the moviemakers try to rationalize his betrayal by showing him genuinely concerned that Jesus is going too far in proclaiming his mission in Jerusalem at a dangerous time, the Passover. This would make Judas more of a moderate than a traitor. But when Caiaphas is planning the arrest of Jesus and needs Judas’s help, the apostle asks greedily, “What’s in it for me?” and is rewarded with the thirty pieces of silver. What are we to make of this schizoid character? The filmmakers want to adhere strictly to the words of the gospel, but they don’t want to offend modern sensibilities. I sympathize with them in their dilemma, but their solutions come across as incoherent compromises rather than as humane dramatization. They would have had to radically reconceive the characters of Caiaphas, Pilate, and Judas to avoid both bigotry and dramatic inconsistency, and they just weren’t up to the task. It is precisely this inadequacy of imagination that introduces an element of uneasiness into a movie that is otherwise so loud and abrasively one-dimensional.

However, one would never label Diogo Morgado’s performance in the title role as loud or abrasive, though it is one-dimensional. Has there ever been such a laid-back embodiment of the preacher whose words and presence changed the course of history? This is a Jesus who couldn’t puff past the second row of the crowd gathered at the Mount. His is a voice that coats the eloquence of the ages with marzipan. When Morgado’s Christ pronounces the terrifying forecast of a Jerusalem “not one of whose stones will be left standing,” he is playfully poking the belly of a child to make him laugh. That moment is typical of a movie that turns the power of the gospels into the worst sort of Sunday-school treacle, and renders its multifaceted hero as a New Age guru, serenely smiling and insufferably groovy.