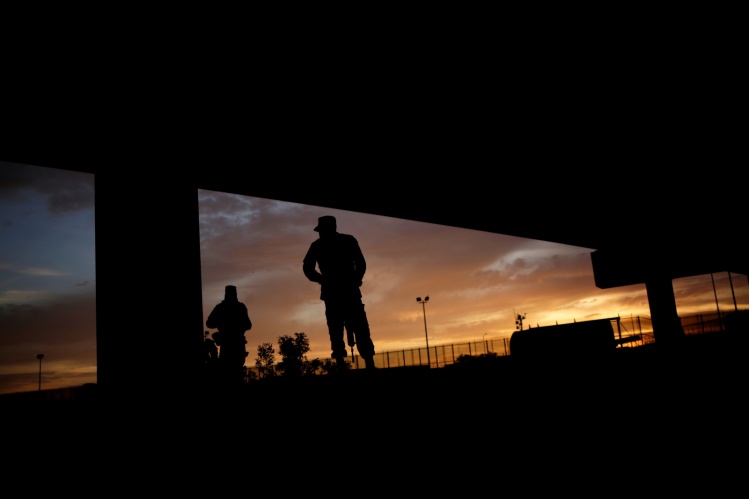 Members of the Mexican National Guard near the U.S. border in 2019 (CNS photo/Jose Luis Gonzalez, Reuters)

It looked like Francisco (not his real name) was going to be one of the lucky ones. The twenty-five-year-old Guatemalan had fled his own country after members of a drug cartel threatened him. He arrived at the Mexico-U.S. border in April 2019, a time when the Trump administration was pushing hard to deny asylum to Central Americans. Despite this, he surrendered to Border Patrol agents, requested asylum, and had three interviews in the United States so that his claim could be assessed. He was scheduled for a fourth and final interview, which would have determined whether he’d be granted asylum. “I put all my possessions in my backpack,” he said. He left the church where he was staying in Nuevo Laredo and prepared to cross the border for the interview. “Everything looked good.” And then everything fell apart.

In Guatemala, Francisco was a “Promoter of Culture,” traveling to the 110 communities in Alta Verapaz, a mountainous region in northern Guatemala. “I was a teacher of indigenous culture,” he said. “I talked to them about tourism, we played sports in the afternoons.” The locals came to trust him. And then they started telling him about the murders.

The Zetas, a brutally violent Mexican cartel, moved into Alta Verapaz in 2007. They took over the production and distribution of drugs, began controlling prostitution, kidnapped and extorted businesses, and murdered members of other cartels. As they solidified their hold on the region, they also wanted land. “They wanted it for cocaine, for marijuana, for airstrips,” Francisco said. He showed me a short video about a man who refused to give up his land: he was found hacked to death.

Francisco had a friend in the police, someone he trusted. So when local residents told Francisco the names of some of the murderers in the cartel, he shared those names with his friend. Arrests were made. Soon other policemen found out it was Francisco who had provided the information, and at least one of these policemen was working for the Zetas. The first indication that the cartel knew about Francisco was a phone call. “They threatened to kill me,” he said. Soon after that they delivered a stronger warning. “They drove by and shot at my house. Two or three bullets shattered a window.” Four days later, on February 21, 2018, Francisco left his pregnant wife and small child. “I was afraid for them but the problem was with me,” he continued. “I left alone because we did not have enough money.”

At least 400,000 Central Americans, the vast majority from Guatemala, Honduras, and El Salvador, enter Mexico each year. Most enter irregularly, crossing the Río Suchiate (the border between Guatemala and Mexico) on rafts. Francisco entered Mexico at an immigration checkpoint, using his student ID and telling the immigration agents he was entering so he could finish his thesis. “I told them it was about immigration,” he said.

The journey through Mexico can be extremely dangerous. Central American refugees have been robbed, kidnapped, and raped with impunity by the cartels, gangs, local thugs, and sometimes even the police. Making his way by bus and on foot, Francisco was able to avoid the worst of these dangers, but not all them. “In Palenque, the Municipal Police stole my phone,” he said, “and in Villahermosa the Federales robbed me of 700 pesos. The police are worse than thieves.”

Francisco arrived in Mexico City in May 2018, and stayed in a shelter for four months. He briefly worked as a hospital janitor before being hired as a guard in the shelter. The following spring he decided to head north to the U.S. border and request asylum.

MPP is really designed for people not to be able to access asylum, and it’s been extremely effective.
sharetweet

In December 2018, the Trump administration unveiled the Migrant Protection Protocols (MPP), also known as Quédate en México (“Stay In Mexico”). Almost all Central Americans requesting asylum now have to remain in Mexico while waiting for their interviews. There are exceptions—minors, for example, are exempt from the rule—but a Department of Homeland Security (DHS) memo states that even people who “claim a fear of return to Mexico...but who have been assessed not to be more likely than not to face persecution or torture in Mexico” must return.

Gretchen Kuhner, who directs the Instituto para las Mujeres en la Migración (IMUMI), a program that helps migrant women, told me that “at least 60,000 people have been returned under MPP.” According to an IMUMI report, 20,000 asylum seekers remain at the northern border. Lizzie Fulton, an IMUMI attorney, told me that the shelters along the border have room for only a thousand asylum seekers. “There are several times more in need of housing, so in places like Matamoros, most people are living in tents,” she said. “People need to get permission from the cartels to put up their tents.”

Violence is increasing throughout Mexico, but it’s especially bad in the cities of the north. “In Matamoros, I was meeting ten people a day,” said Fulton. “I’d say maybe a third had reported being kidnapped. There was one family that was kidnapped twice.” Tracking the kidnappings reported in local papers in Tamaulipas, Baja California, and Chihuahua, IMUMI found that 418 had taken place between September and October 2019.

The DHS memo insists that its Migrant Protection Protocols ensure “that vulnerable populations receive the protections they need. Mexico will provide them with all appropriate humanitarian protections for the duration of their stay.” Arturo Viscarro, an attorney representing migrants, knows how little this assurance is worth. “Obviously they [the DHS] know it’s not true. They know they’re lying.”

“MPP is really designed for people not to be able to access asylum,” said IMUMI’s Kuhner, “and it’s been extremely effective.” Staying in Mexico means that asylum-seekers face daily violence and have less access to the legal assistance they need to navigate an extremely complex application process. “Quédate en México is the most destructive thing that Mexico has done,” said Gabriela Hernandez, the director of Casa Tochán, a shelter for migrants. “No one can pass into the United States [from Mexico] and so we have become the wall that Trump wants.”

Francisco stayed in Nuevo Laredo while waiting for his asylum case to be heard. He paid 200 pesos a week to the Cartel del Noreste so they wouldn’t kidnap him. “If I didn’t, it would be $5,000”—for ransom. One night, he was awakened by gunfire. “Two bullets struck the wall, about one meter from my head.” Despite the violence, he stayed, helping out at the church shelter where he was living. He made it to the first three asylum interviews, paying the cartel $300 each time he crossed the bridge into the United States. Until the last time.

The instructions he was given for his final interview told him to bring all his possessions and any family members traveling with him. He was hopeful, but when he reached the bridge the cartel demanded not $300 but $2,000. “There was no way I could pay it.” He said the cartel had increased its fee because the Mexican National Guard was at the Guatemalan border, stopping caravans. Since there were now fewer asylum seekers reaching the U.S. border, the cartel was charging more to make up the difference. “I was so angry,” Francisco told me. “I left for Mexico City that very day.”

Francisco returned briefly to Guatemala in March to attend his grandmother’s funeral. “I was afraid to return because there are still many people there who want to kill me,” he told me in a text message. But he wanted to see his grandmother buried and reunite with his wife and children, including a daughter who was born after he left Guatemala. “I had hoped to return to Guatemala because that is where I was born. My parents are there, my family,” he said. But after a short stay at home, Francisco returned to Mexico City. It was still too dangerous for him in Guatemala. Once again, he had to leave his wife and children behind.

He is still working as a guard in the church shelter, but now lives in a rented room. “I liked my work in Guatemala. I could help people, there was a social connection,” he said. “Here, working as a janitor, being a migrant...that’s the worst thing that ever happened to me.” He still dreams of being granted asylum in the United States. He wrote a letter to the U.S. immigration authorities requesting another interview. “But they never answered me.”