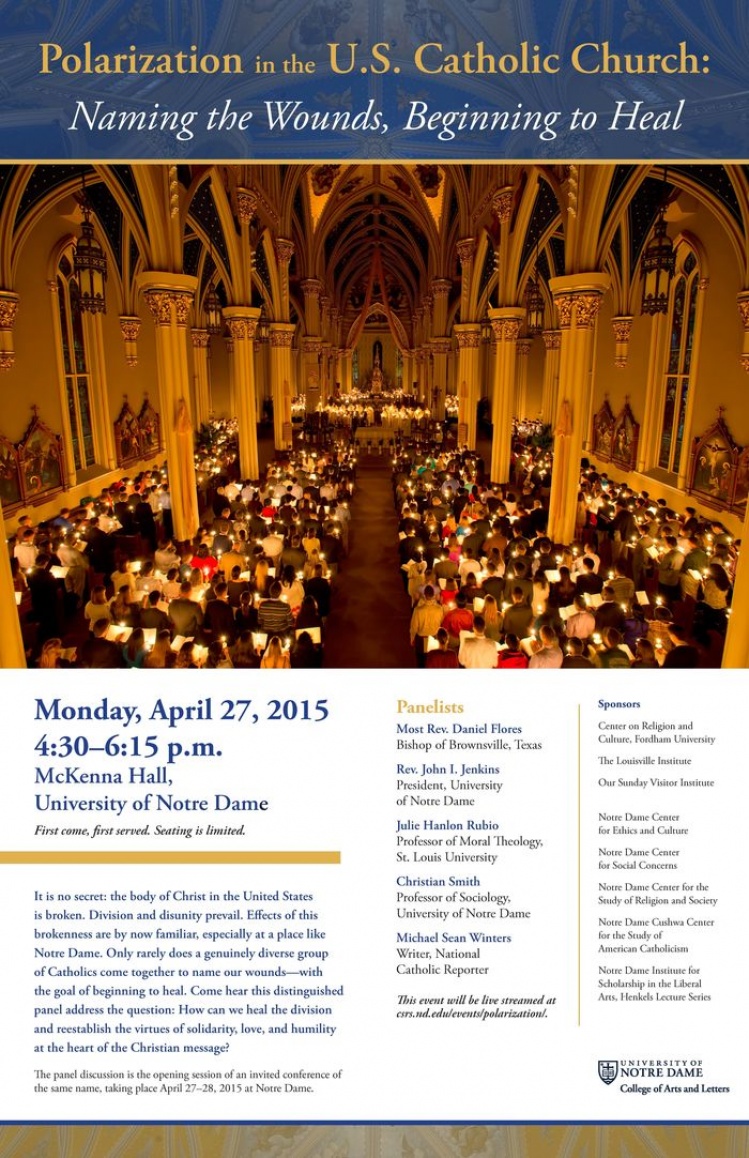 What can be done about polarization in the American Catholic Church? A conference next week at the University of Notre Dame aims to address the causes of polarization and advance ideas for healing some its wounds.

Political scientists agree that the United States has become increasingly polarized over the past forty years. Analyzing the possible causes has become a hot topic for peer-reviewed scholarship, op-ed pages, and blogs. (Some recent round-ups of scholarship can be found here and here.)  Was polarization catalyzed by Roe v. Wade? Or Bush v. Gore? Or the partisan onslaught of 24-hour cable news? In any case, it’s hard to remember the map before it showed red and blue states.

Putnam and Campbell’s book American Grace tells the recent history of religion and politics by charting a cultural “shock” -- the long 1960’s -- and two “aftershocks” -- the rise of the Religious Right, and subsequent disaffection by others from organized religion (the rise of the “nones”). This led to a reconfiguration of alliances, such that political affiliation is no longer driven by denomination but by devotion, no longer by religious affiliation but by religiosity. When measuring religiosity in sociological terms (self-reported attendance at services, frequency of prayer, etc.), current Democrats significantly trail overall demographics.

Other political scientists isolate race as a primary cause, citing how current Republican adherents significantly trail overall demographics in terms of ethnic diversity. While the race and religiosity arguments track a decades-long shift, many would add a more recent change – the rapidly increasing acceptance of homosexuality – to the mix of factors affecting polarization.

Quantitative analyses show that the last twenty years of elections have been extremely competitive (i.e., close margins of victory), and so it is not surprising that the electorate feels more polarized. But perhaps polarization is just another word for “sorting.” Are we more polarized than before, or rather sorting ourselves more effectively through local migrations based on income, education, marital status, and other indicators of “assortative mating?”

State legislatures respond to local migrations by gerrymandering safe districts, while activist organizations, lobbyists, and marketing gurus fashion ways to bolster the ideological boundaries of sorted groups into targetable micro-cultures. The well-sorted and ideologically pure respond well to culture war rhetoric, which is offered in heavy doses by organizations such as Planned Parenthood and the National Rifle Association.

The increasingly partisan “old media” of cable news help to further segment the population and stimulate the primordial parts of our brain that derive pleasure from tribalism (see Jonathan’s Haidt’s The Righteous Mind). Recent studies of the media’s role in polarization have found important but not always intuitive results: partisan media produce both a more moderate core turned off by polarization and an extreme segment more fired up than ever. Current media offerings don’t increase the quantity of partisans, but their intensity – “affective polarization,” or dislike for the other party. The rise of “new media” and “social media” then offers a potent way to compound the effects of sorting, lobbying, and marketing on a group’s affective polarization.

That’s about twelve different causes of political polarization isolated by political scientists in recent years. Which of these are affecting the church? I would argue that almost all of them have.

While we cannot fully escape these cultural forces (at least not without becoming sectarian, the so-called “Benedict Option”), I plan to propose a few ways that the church can try to transcend its polarized culture. Specifically I will emphasize (1) in the realm of liturgy, the necessity of intentionally curating a unity-in-diversity; (2) in the realm of politics and ethics, a commitment to juxtaposing seemingly polarized opposites, when doing so manifests church teaching; (3) in all facets of church life, creating spaces for graced encounters across lines of class and color; and (4) in each person’s everyday life, a commitment to diversifying media intake. I have concrete ideas for each of these, and I’ll report back on specifics after the conference -- from which I’m sure to learn a lot and change my opinions.

Now even as I write this, I’m skeptical of my own proposals. Are calls for transcending polarization hopelessly naïve, as some church historians have claimed? Maybe so, since we’ve been divided on key issues from the beginning, like when Paul got in Peter’s face at Antioch (Gal 2:11). Paul had the naïve, even insane notion that God had opened the covenant to Gentiles. Then again, our tradition holds that these two culture warriors met again in Rome, where they found their unity-in-diversity.

Church history proves that the line between naïveté and hope is not always clear. Or rather, that line doesn’t hold still.