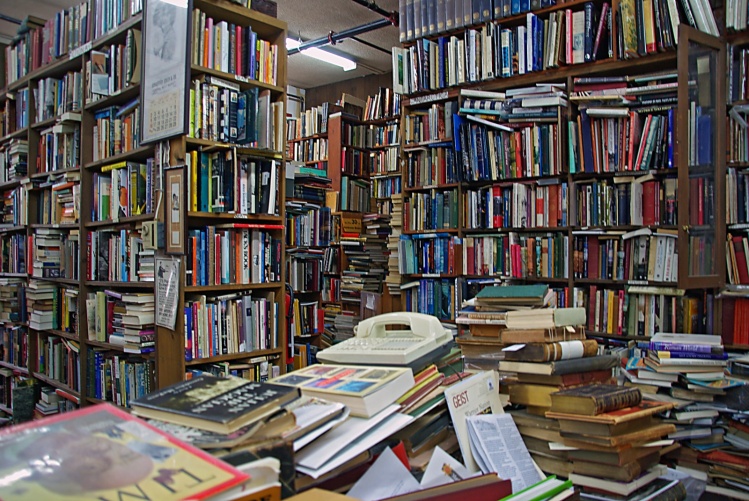 What I’ll most remember about 2017 is, to use the poet Lawrence Joseph’s words, “the fiery / avalanche headed right at us.” This was the year I finally got around to watching Twin Peaks, and at times it’s seemed like we’re all living in a David Lynch fever dream. Fake News? “Very fine people on both sides”? Covfefe? We must all be stuck in the Red Room and not know it.

Yet despite all this, there was also great art. There’s always great art. In 2017, I had the pleasure of writing about, and talking with the authors of, my favorite book of poetry published this year (Lawrence Joseph’s So Where Are We?), my favorite novel (Alice McDermott’s The Ninth Hour), and my favorite short story collection (Carmen Maria Machado’s Her Body and Other Parties), not to mention the most insanely pleasurable book I read in any genre (Elif Batuman’s The Idiot).

So, in reflecting upon 2017, I’ll focus instead on those books that I haven’t mentioned in the magazine. These aren’t necessarily the best books of the year; I haven’t read enough to make that judgment. But they’re all books that I loved.

“Love” is a word that the writers I interviewed kept coming back to. Here’s Machado: “Love is not a magic force—it’s hard work, sustained effort, risk.” And Batuman: “In a lot of ways, being a writer is a lousy job—grueling, emotionally taxing, terrible hours, no health care—so if it wasn’t about love, what would be the point?” And Joseph: “Love, the act of loving, beauty, are first, fundamental truths.”

Let’s hope that next year is a loving one.

Easily the best book of criticism I read this year, it’s filled with brilliant passages on rhyme and poetic form and bad taste. Robbins is continually generous to other great critics (Hugh Kenner, Pauline Kael, Anthony Madrid) and to the artists he loves for various and complicated reasons (Yeats, Prince, Journey).

To write a poem is, ultimately, a redemptive act, a profession of faith in beauty (whether or not the poem is “beautiful”). But in a world where sons are pointlessly slaughtered, fathers drown themselves, and the hearts of men are merciless, the promise of redemption is a bad joke and beauty an insult.

I always look forward to Wood’s reviews. His sentences never quite finish where you expect them to and, no matter if he’s writing on film or fiction, he always directs your attention to the right spots—the surprising detail, the formal decision that matters. In this way, he resembles Empson, whose Seven Types of Ambiguity remains the best book of poetry criticism there is. It’s a privilege to see their two minds meet.

If criticism can’t explain, can’t peg things out in words, it can, often magnificently, show us what there is to be looked at, prove there is a crossroads where we so far have seen only a single, well-trodden track.

Yiyun Li, Dear Friend, from My Life I Write to You in Your Life, Random House

A series of lacerating and consoling essays about selfhood, memory, melodrama, depression, and the way that reading and writing might help manage or mediate between them all.

Unless shut away in a journal that will be safely and timely burned, one’s words will always be read, by design or by accident. Hiding behind these words is like entrusting one’s self to a straw house—there is the wind, there is the wolf, and above all, there is one’s urge to destroy the house before it is destroyed by an external force.

These aren’t necessarily the best books of the year, but they’re all books that I loved
sharetweet

The second novel in a projected trilogy—the moment in a trilogy, in other words, when the energy normally flags—Transit is loosely plotted but precisely and splendidly written. We follow Cusk’s self-concealing narrator as she renovates a house, goes to a book festival, and meets with students. It’s not the story that sustains interest, though. It’s the gem-like sentences.

Most marriages worked in the same way that stories were said to do, through the suspension of disbelief. It wasn’t, in other words, perfection that sustained them so much as the avoidance of certain realities.

Another second novel in another projected trilogy, Kingsnorth’s Beast disturbs, confuses, and moves. At times, it reads like Beckett in its sparseness. But it can also be positively Annie Dillard-like in its sense for nature’s savage beauty.

The wheel of blood and sperm and death and life kept turning and none of it needed me none of it knew me for there was no me and never had been. I saw the abyss open up and I knew I would be swallowed by it and I knew that everything in my world everything I was and everything I thought and felt and cared about and refused to care about had been carefully constructed only to help me survive any glimpses I might have of this.

Senna’s first novel, Caucasia, was compared to Invisible Man. This one is even better. A limber investigation of racial politics and the desire for authenticity in mid-1990s Brooklyn, New People is the funniest, smartest novel I read all year.

Lisa has discovered only since Maria became a part of their family that her darkness is something she can lord over people — that it is something superior to her brother's high yellow. Maria was surprised nobody ever told her this before. Lisa is beginning to understand that the very things she hated growing up, her kink and her color, have begun to have currency if you know where to go, who to be around, who to avoid, how to frame the conversation.

Adam Roberts, The Thing Itself, Gollancz

This semester I got to teach a course on science fiction, one of my earliest readerly loves. In preparation, I read this magnificent novel, which does what SF does best: take an idea (in this case, Kantian metaphysics) and build a story, even an entire fictional world, out of it. An adventure story and a mind-puzzler, The Thing Itself exhibits genius from the very first page.  (Note: The Thing Itself technically came out in the fall of 2016, but it’s too good not to include.)

Twenty-first century atheists peer carefully at the world around them and claim to see no evidence for God, when what they’re really peering at is the architecture of their own perceptions. Spars and ribs and wire-skeletons—there’s no God there. Of course there’s not. But strip away the wire-skeleton, and think of the cosmos without space or time or cause or substance, and ask yourself: is it an inert quantity? If so, how could… how could all this?

This novel, the winner of the National Book Award, is as good as everyone says it is. Last year, C. E. Morgan’s The Sport of Kings had me grasping for Faulkner comparisons. This year, it’s Ward’s haunting novel about race, addiction, and history.

I burrowed and slept and woke many times before I realized this was the nature of time.

Samatar generally works in the fantasy mode, but this short story collection showed off her SF chops as well. She’s a first-rate storyteller and just as good a stylist.

I once heard a beautiful story. I suppose that's why I write: because once somebody told me something beautiful.

Antic, absurdist, comic, and Catholic, this ribald novel grows out of the Evelyn Waugh and John Kennedy Toole tradition. But I also heard echoes of Auden. Like him, Oser finds theology in two unlikely genres: the picaresque and the detective novel.

[Agatha] flew down to Mexico with the handsomest of the dabblers who bought our Zen pots, someone named Alexander who went by the letter A. Who was this guy? An aging preppy with more money than looks, more looks than brains, and more brains than character, a sometime actor who smiled his way through college and lacked the decency even to fail.

I’ll read anything that is blurbed by Fanny Howe, and this debut collection didn’t disappoint. Akbar’s poems are pain- and grace-filled, deeply religious yet also deeply, physically embodied.

I was promised epiphany, earth- // honey, and a flood of milk, but I will settle for anything that brings you now, / you still-hungry mongrel, you glut of bone, you, scentless as gold.

I picked up Mlinko’s new collection after reading a fantastically smart essay she wrote on Fanny Howe (noticing a trend?). Her distinctive style is extravagant in language but disciplined in form; the mental and linguistic leaps required to keep up make for exhilarating reading.

These plexiglass skylights, modern as sans serif, / once provided access to the seraph. / And love as-is absorbed a gone oasis.

Kennedy is a delight to read—something I hadn’t done until this year, probably because his poetry tends to be classified as light verse and I, like many poetry readers, tend to be a snob. This collection contains superb rhymes (Nicholas/pickle us; subspecies/feces) and, despite the label, moving meditations on aging and death. Kennedy is a seriously funny, and funnily serious, poet.

When Hardy perished, torn between / A Dorset graveyard and the Abbey, / Folks whispered a peculiar tale / Whose central figure was a tabby.

This was a particularly good year for literary biography, with these three among the best. Blunk’s is a model of the form, offering a rich, textured sense of Wright’s life that supports a rich, textured reading of the poetry. Jasanoff tells the story of Conrad’s life through his novels, following both across the increasingly globalized world of the British Empire in the late nineteenth century, while Atlas offers a consistently entertaining and enlightening meditation on the craft of literary biography.