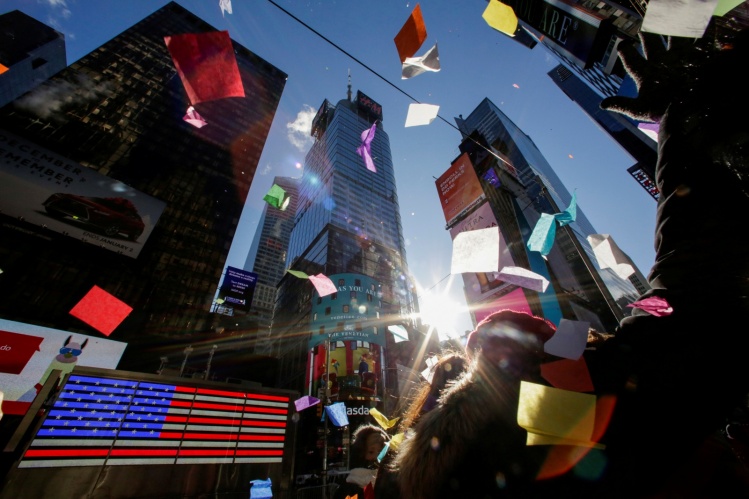 People in New York City look at confetti Dec. 29 as it’s thrown from a marquee as part of the confetti test ahead of the New Year's Eve ball-drop celebrations in Times Square. (CNS photo/Eduardo Munoz, Reuters)

With New Year’s resolutions and almost everything else in life, it’s essential—and often extremely difficult—to set priorities. This applies especially to politics, now dominated by the provocations and outrages that emanate daily from President Trump and his White House.

In 2018, Trump’s abuses of power, his indifference to truth, and his autocratic habits will be the central issues in our politics. Nothing else comes close.

This means there is no more vital business than containing Trump and, if circumstances demand it, removing him from office. This applies not only to progressives and liberals but also to everyone else, from left to right, who would defend our democratic values and republican institutions.

This may sound obvious, but it’s not. Among Democrats, there are often irresistible temptations to fight internal battles in preparation for 2020: Clinton people vs. Bernie people, the center-left vs. the left, the market-friendlies vs. the social democrats and democratic socialists.

These are necessary arguments, and, in any event, they cannot be suppressed. But they are not the most important thing. With special counsel Robert Mueller’s investigation under constant threat from Trump’s apologists, solidarity among his opponents is imperative. This is all the more pressing in the face of the Republican leadership’s shameful cowering before a president who is perpetually in search of loyalty and sycophantic praise.

It is a habit of political commentators to say that Democrats “lack a message” and a program. It’s worth mentioning that this has not stopped them from winning a lot of elections, some in unlikely places, over the last few months.

Of course Democrats must offer a compelling vision of a just country and a coherent approach to the world. They have to be mindful of the complicated and highly diverse coalition they need to build—starting with African-Americans, but also reaching out to working-class voters of all races who are being hurt by Trump’s policies. Most districts cannot be won without broad, multi-racial alliances.

With special counsel Robert Mueller’s investigation under constant threat from Trump’s apologists, solidarity among his opponents is imperative.
sharetweet

But this is a year of midterm elections, not a contest for the presidency. Voters typically use off-year ballots to render a judgment on a president’s course, particularly when they are unhappy—think 2006, 2010, and 2014. The most effective mid-term slogan ever was the GOP’s 1946 plea: “Had Enough? Vote Republican.” With a change in the last word, it would fit the current anti-Trump mood well.

Trump, not some ingenious new policy, will be the issue on voters’ minds and opposition to him will be the most powerful force pushing voters to the polls. Yes, progressives should talk about Trump policies they would try to check or roll back—beginning with the GOP’s egregious tax giveaway—and work to make their ideas on health care, jobs, infrastructure, the environment and education more persuasive. But the point of 2018 is to meet the emergency this presidency has created.

Let’s not shilly-shally about this. To truly check Trump, Democrats will need to win elections in usually unfriendly territory. As my loyally Republican Washington Post colleague Michael Gerson wrote last month, Republican politicians will abandon Trump only “if they see it as in their self-interest.” For this to happen, they will have “to watch a considerable number of their fellow Republicans lose.”

A campaign in defense of democracy that transcends immediate policy goals will make it easier for moderately conservative voters to do something a lot of them won’t relish: vote for a party they usually shun.

Since electoral politics is about addition rather than subtraction, progressives ought to welcome the anti-Trump conservatives without expecting them to alter all their views. Again, none of this requires the left to abandon its purposes. Many progressive positions on matters from health care and family leave to fairer taxation and workers’ rights are widely popular. The fact that revulsion over Trump has shaken loose many normally Republican voters can be embraced as an opportunity for dialogue and persuasion.

What deserves rebuke is the obsequiousness of the current Republican political leadership toward Trump as well as the indifference of the president’s protectors to the rule of law. Their willingness to pile falsehood upon falsehood in his defense amounts to a war on the basic requirements of reasoned debate in a free society.

Friends of republican democracy are called upon to set aside their differences to resist the corruption of presidential authority, to stand up for truth, and to insist that Trump be held accountable.

The priority of 2018 is for our nation to rise up and say: Enough.