The Toll of Sectarian Politics 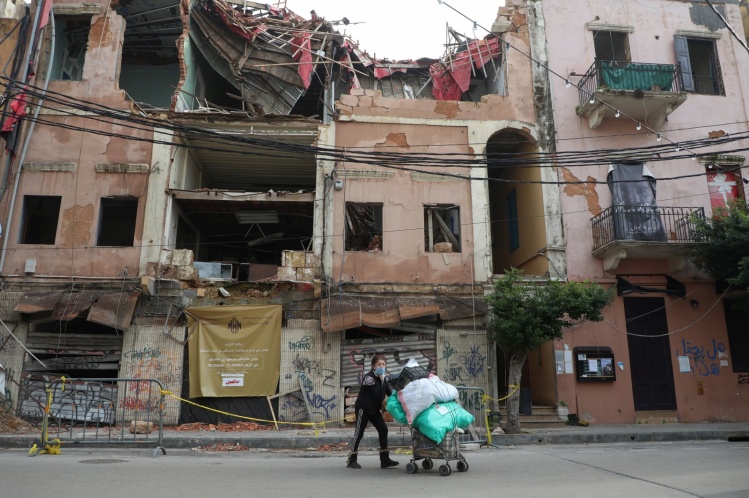 During the past two years Lebanon has gone through a series of crises that have pushed its residents to the brink of ruin. A financial collapse engineered by the governing elite saw millions lose their savings; an explosion in Beirut’s port killed hundreds, maimed thousands, and destroyed the livelihoods of half the city; and now a global pandemic has pushed an already impoverished nation into outright destitution. The United Nations estimates that three-quarters of the population now live below the poverty line. Hundreds of thousands of Lebanese, both young and old, have left the country in search of greener pastures abroad. Lebanon’s Christian community, which still makes up roughly a third of the population, is shrinking every day, many of its members having finally given up on making a good life for themselves in their home country.

Medicine disappeared from the shelves of pharmacies after subsidies were removed there as well. People have started resorting to social media to procure medicine—from basic painkillers to chemotherapy drugs. Twitter is filled with desperate requests from people with serious medical conditions, while advertisements on Facebook and WhatsApp promise to fill prescriptions with weekly deliveries from Istanbul. Visitors to Beirut now often bring an extra suitcase filled with medicine and baby formula.

Schools have also taken a hit. The American University of Beirut, one of the most important institutions of higher learning in the Middle East for over a century, is struggling as faculty and staff quit for better futures abroad. Like every other institution in Beirut, it started losing money when banks implemented unofficial capital controls at the beginning of the crisis. In an effort to slow the flight of its faculty, the university has offered to pay professors 20 percent of their salaries in U.S. dollars and to pay the remainder in Lebanese lira at an exchange rate five times better than the market rate. Meanwhile, the Lebanese University—the country’s flagship institution of higher learning with over eighty thousand students—remains in limbo. Its administrators and teachers squabble over pay raises, transportation subsidies, and a pandemic that has shifted most schooling online. But if there isn’t any electricity to charge laptops, students won’t be able to attend classes. And once the pandemic relents, how will teachers drive to campuses if gas is still too expensive?

The flight of capital from Beirut, along with the collapse of its administrative, medical, and educational sectors, is slowly provincializing what was once one of the most vibrant and cosmopolitan cities in the eastern Mediterranean. The crisis has demonstrated beyond all doubt how intimately linked the country’s various institutions are: the collapse of one sends shockwaves across the whole Lebanese economy.

While Lebanon’s political leaders remain mostly feckless and inert in the face of catastrophe, some of its other leading institutions, such as the Maronite Catholic Church, are sounding the alarm. The Church’s leadership decries the flight of Christians from the country. Yet their actions over the past few years have done little to prevent that trend. By continuing to support political Maronitism, the Maronite Church plays a prominent role in protecting the regime of sectarian “consociational” governance that has led Lebanon into its current predicament. This problem goes back a long way. The Church solicited foreign and colonial support for Maronite-only rights and primacy in Lebanon during both the Ottoman and French-colonial eras. Some historians claim that the Maronite Church’s intimate relationship with France is to blame for Lebanon’s sectarian political system, in which different positions are reserved for members of specific religious communities.

The Church has repeatedly shown that it cares less about good governance than about preserving the place of Maronites within Lebanon’s constitutional framework.
sharetweet

This is not to suggest that the Church has always held the same line when it comes to Lebanese politics. It has sometimes opposed Maronite Lebanese presidents who threatened its agenda. When President Chamoun sought to extend his mandate in 1958, the Church did not support him. Still, the Church has been consistent about one thing: it has repeatedly shown that it cares less about good governance than about preserving the place of Maronites within Lebanon’s constitutional framework. Apart from that principle, its political interventions are largely opportunistic.

The Maronite Church is one of the largest landowners in Lebanon. It often rents or leases its property to Lebanese businessmen enmeshed within the political establishment, making it an active player in the country’s rentier capitalism. If the Church’s leaders truly cared about the flight of Christians no longer able to afford life in Lebanon, they would use the Church’s ample resources to support some kind social housing on Church land.

Or the Church could use them to help the students and teachers of the private Catholic schools it sponsors. As the Lebanese lira has plummeted to historical lows, Catholic schools have hiked up tuition to cover costs, forcing many students to drop out. The schools have also refused to increase the wages of their teachers and workers, whose salaries no longer keep up with the surging inflation. But so far the cries of both parents and teachers have fallen on deaf ears. In short, the Maronite Church refuses to put its money where its mouth is. Despite its frequent expressions of anxiety over the country’s future, it has refused to spend its wealth to help those it claims to represent.

The Church’s current leadership has also made some dubious political choices. The current patriarch, Bechara Boutros el-Rahi, is a close ally of the country’s president, Michael Aoun, who has been in charge of the country during the period of its economic collapse. Aoun is also a staunch ally of Hezbollah, an organization responsible for the misery and torture of thousands of Arabs across the Levant, yet el-Rahi continues to stand by the president no matter how bad things get.

Every so often el-Rahi releases statements calling for Lebanon to be neutral in current geopolitical squabbles, yet in 2013 he restored the Maronite Church’s ties with the Syrian regime of Bashar al-Assad, another ally of Hezbollah. Assad has destroyed his own country, waging a civil war that has killed over half a million Syrians, and displaced half the population. This did not stop the patriarch from visiting Damascus and leading a service there with officials of the Assad regime in attendance. El-Rahi believes that religious minorities in the Levant, such as Christians, Alawites like Assad, and Shiite Muslims, must band together to resist the tide of Sunni political Islam. This sectarian reading of regional politics serves to perpetuate the misery of those who rose up against authoritarianism in the Middle East in the Arab Spring.

In October the patriarch proposed that Judge Tarek Bitar, the embattled state prosecutor leading the investigation of the Beirut Port explosion, be sidelined from his inquiry. Bitar has issued warrants for the arrest of several former Lebanese officials because of their role in creating the dangerous conditions that led to the explosion. Despite pressure from the political establishment and threats from groups like Hezbollah, Bitar has remained steadfast in his pursuit of justice. It’s still too soon to predict whether he’ll succeed, but after all the catastrophes the Lebanese population has faced in recent years, Bitar has become a symbol of integrity and justice. The current Lebanese government did not hold a session for almost three months because Hezbollah and its allies boycotted cabinet meetings unless Bitar was removed from the investigation.

The Maronite Church has become an important force in Lebanese politics precisely because it embraces the sectarianism at the heart of Lebanon’s social and political structures. Many anti-sectarian activists would scoff at the idea that the Maronite Church could ever welcome the kind of reforms the country so badly needs. But what is the alternative? The country’s future is bleak; Lebanese Christians are leaving in droves. If the patriarch were as alarmed at the situation as he pretends to be, he would call for radical changes to the political system that has produced all these crises. He would be less concerned with preserving the Maronite Church’s political power than with helping the ordinary Lebanese citizens—Christian and Muslim—whose lives have been blighted by a corrupt and incompetent political class. Until now, that class has been able to use sectarian loyalty to shield itself from accountability. Will el-Rahi allow that to continue?

Zeead Yaghi is a PhD candidate in modern Middle East history at the University of California, San Diego.