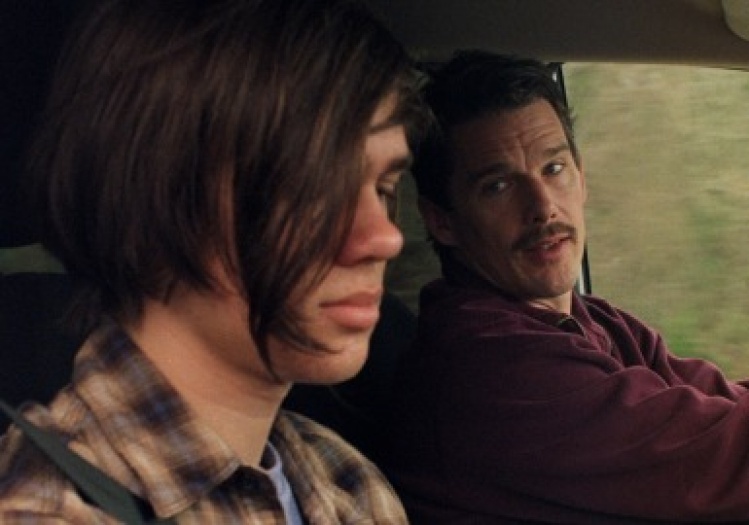 Writer-director Richard Linklater made a name for himself with a pair of cult films in the early 1990s. Slacker captured the rants and rambles of coffeehouse anarchists, conspiracy theorists, punks, and other emblematic college-town figures culled from Linklater’s hometown of Austin, Texas. Dazed and Confused—a coming-of-age ensemble comedy that followed a bunch of teenagers on the last day of school in 1976—offered a less glossy, de-romanticized American Graffiti. Linklater’s big achievement since then has been the “Before” trilogy (Before Sunrise, Before Sunset, Before Midnight), chronicling the periodic love affair, over two decades, between an American writer (Ethan Hawke) and the Frenchwoman (Julie Delpy) he meets on a train.

Directors with strong styles can inspire a certain ambivalence. What I resist in Linklater are his sentimental regard for late-adolescent profundity, his indulgence of talk, the obviousness of his themes, and a certain fundamental dramatic shapelessness that can make his films seem underplotted and baggy. What you get in return are soundtracks animated by an exuberant love of rock and roll, sharp insights into the minds and hearts—and language—of young adults, a very closely observed cinematic realism, and, most of all, an abiding obsession with time and its workings. Both Slacker and Dazed and Confused were timepiece movies, dedicated to recapturing a certain social and developmental moment. The three “Before” films were scripted to operate in semi-real time, each covering a span of less than twenty-four hours, slowing viewers down even as they imposed diurnal (or nocturnal) deadlines on their two lover-protagonists. The nine-year gaps between the “Before” movies also played with time, marking off parallel intervals in the characters’ lives, the actors’ lives, and our own lives, so that one came to each installment with a lot of catching up to do—including with oneself.

The obsession with time lies at the core of Linklater’s singular new film, Boyhood. In a sense it is misleading to call Boyhood new, since work on it began in 2001. To chronicle an American childhood and the changes wrought upon a family over more than a decade, Linklater abjured the usual gimmicks (costume and makeup changes, different actors to play the children at different ages, etc.) and landed instead on a novel and logistically formidable idea: shoot the movie in short clumps at yearlong intervals, so that everyone ages twelve years from beginning to end—not just the characters, but the actors themselves. Linklater has gone one step further than the “Before” trilogy; now he has actually incorporated the passage of time into the structure of his film.

The story’s setup could hardly be simpler. Mason Evans Jr. (Ellar Coltrane) is a dreamy six-year-old living with his older sister, Samantha (Lorelei Linklater, the director’s daughter), and his mother, Liv (Patricia Arquette), in a small town in Texas. His parents are divorced, and as the film opens his father, Mason Sr. (Ethan Hawke), returns to town after a year and a half in far-off Alaska. What follows are scenes from the next twelve years, charting the vicissitudes of both the children’s and the parents’ fortunes as Mason makes his way through childhood and adolescence to depart, at film’s end, for college. There is no real plot. Basically a boy grows up, and we watch.

This is a big movie made from many small events. What it captures, again and again, is the sound and feel of real life. In early scenes depicting Liv’s travails as an overburdened single mother, we watch innocent sibling strife push a harried mom around the bend (“Put up a WALL between the two of you!” she shouts as the kids squabble in the back seat of the car). Later, when her second husband turns out to be a domineering alcoholic, we follow her growing recognition that something is amiss in the man—little telltale faults that bit by bit reveal his odiousness and point ahead toward the hell of an abusive marriage. The film is episodic, and few scenes are given much more heft than others; there’s no rising or falling action, no key crisis, and little or no catharsis. If what you want from movies is a glittery escape from daily reality, Boyhood is not for you—and especially not at nearly three hours. (“It’s like watching water freeze,” one acquaintance complained.)

Boyhood brings to mind British director Michael Apted’s Up series, which has followed the lives of fourteen Britons first interviewed as seven-year-olds way back in 1964, checking back in every seven years for an update. Linklater’s film is Up with scenes and a story. Deftly melding documentary and fiction, the movie messes with our usual cinematic expectations. I kept thinking, “Gee, they really didn’t do Ethan Hawke’s aging very well, all that phony gray hair,” and then I recalled, oops, that it really is Ethan Hawke actually aging! Ditto with the phases of Mason Jr.’s childhood and adolescence, how we see him looking first beautiful and then kind of skanky and then handsome again, but with a different facial bone structure. You find yourself responding both to the character of Mason and to the passage of time reflected on Ellar Coltrane’s changing face.

Showcasing time this way—installing it, in effect, as the film’s protagonist—allows Linklater to dispense with certain requirements of conventional movie storytelling. Typically, a coming-of-age film follows a course of crises toward some defining event. Not here. Describing Boyhood in an interview, Ethan Hawke—who helped Linklater dream up the film fifteen years ago—remarked that “the event is the nonevent.” One scene shows Mason, at thirteen, convening with some boys at a building site at night to drink beer, indulge in sexual braggadocio, and commit minor acts of destruction. At one point the older boys in the group use karate kicks to break planks held by the younger boys. The moment teeters ominously; we’re convinced something bad is about to happen. But it doesn’t. Our expectation has been trained by hundreds of films in which critical bad things do happen. Boyhood mostly steers clear of such crises—and when they do occur, it gives them to us off-kilter, often picking up just after they happen. Thus in one scene we see Liv lying on the garage floor, weeping, as her drunken husband stands above her. But we never see him actually strike her.

Linklater exercises the same subtlety with character. The divorced dad, for instance, is such a staple of domestic dramas that we think we have Hawke’s Mason Sr. pegged from the get-go. “You’re not the type of kids who like presents, are you?” he effuses, showing up at Liv’s door after a year and a half’s absence to play the hero, showering the kids with gifts and fun. What we expect to follow is the usual deadbeat-dad parade of feckless selfishness. But, instead, Linklater writes a character who, while flawed, possesses a buoyant capacity for love, an ability to read between the lines with his children, and even a passing purchase on wisdom. Such complexity gives Hawke the role of his career, and he plays it winningly.

Somewhat surprisingly, Boyhood reveals considerable hopefulness about family life. The film implies that children, given sufficient love, can and routinely do emerge unscathed from life in the lower reaches of middle-class America, where alcoholism, serial marriage, ceaseless money stresses, and domestic rootlessness are often the rule. The script pays tribute to the resilience of young people and to the unexpected mercies of life itself. The overriding tone is one of tenuous, nervous reassurance. There’s a scene early on when Liv, forced to move in with her mother back in Houston, uproots her two young children from the town and the home they’ve grown up in so far. “Don’t look back,” she says as they drive away. “We’re going to be all right.”

Near the end, there is some unnecessary underlining of the films’s themes, as when Liv bursts out with a jeremiad about time’s cruelty, or Mason Jr., celebrating his first day of college by taking magic mushrooms and hiking out into the desert with three new stoner pals, rhapsodizes about life as an ineffable series of “moments.” But there is much to admire in a film its director has called “a kind of flowing time sculpture.” Such Proustian conceptions don’t generally pitch well in Hollywood, and I marvel at Linklater for managing to make the film on his own unconventional terms. In capturing not the big moments that people tend to remember, but the small, everyday ones they don’t, Boyhood does not mimic memory but rather explores, and for our benefit subverts, forgetting. Making s’mores by a campfire, allowing your weird step-grandfather to teach you how to shoot a shotgun, taking a plunge with your father in an icy lake, enduring a stilted conversation with a girl you have a crush on, recognizing that your parents are as bewildered about ultimate meaning as you are: it’s the stuff that our stories are made of. “There’s no third-act twist,” Patricia Arquette has said approvingly of Boyhood. “Richard had faith that life was enough.”