Throwing Money at a Problem 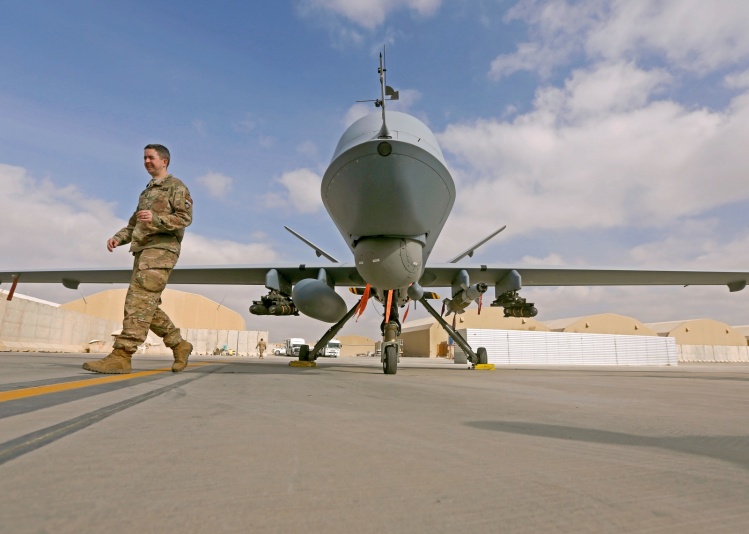 A U.S. service member passes in front of an MQ-9 Reaper drone at the Kandahar air base in Afghanistan. (CNS photo/Omar Sobhani, Reuters)

It is frequently noted that the United States spends more on “defense” than the next seven nations combined. It’s a staggering fact that doesn’t make any strategic or tactical sense. What threats do we face that can be met only by spending more than China, Saudi Arabia, India, France, Russia, Britain, and Germany collectively spend to ensure their own security? What have we achieved by spending such gargantuan amounts? The invasion and occupation of Iraq was a colossal failure that destabilized an entire region. The eighteen-year-long war in Afghanistan, the longest in American history, will also end in retreat, if not humiliation. Together those military actions have also been the most expensive in U.S. history. We have spent more on reconstruction in Afghanistan than on the Marshall Plan to rebuild Europe after World War II. Yet, in the aftermath of 9/11, there seems to be no end in sight to ever-bigger military budgets and further U.S. military adventurism abroad.

Most of the facts in the paragraph above are drawn from Jessica T. Matthews’s important article “America’s Indefensible Defense Budget” in the July 18 New York Review of Books. Matthews, former president of the Carnegie Endowment for International Peace, has also served in the State Department and on the National Security Council. Congress is now debating the 2020 defense budget. President Donald Trump has proposed a $750-billion defense budget, an increase of $34 billion over 2019. Trump has increased defense spending by $100 billion since moving into the White House. Democrats in the House just passed a $733-billion defense bill with provisions designed to hamstring Trump’s ability to wage war in Yemen or Iran, or to divert defense spending to border security. It is doubtful that the Republican-controlled Senate will endorse such limitations on presidential power. In any event, as Matthews notes, since 9/11 Democrats have largely gone along with the huge expansion of the Pentagon’s budget. Today’s military budgets now exceed those under the Reagan administration in the 1980s, when the United States was thought to face an existential threat from another superpower.

Spending on the military has not assuaged the public’s anxiety about future wars.
sharetweet

Of course, defense spending is a guarantee of millions of jobs in congressional districts across the country. Thanks to tax cuts and military spending, the deficit and national debt have exploded under Trump. Republicans’ supposed concern for unnecessary or wasteful government spending disappeared once they gained control of Congress and the presidency. It’s a familiar pattern. For all his vaunted “populism,” Trump has governed very much like Reagan, dramatically increasing military spending, deregulating industry and the financial sector, talking tough on crime, and ignoring the economic plight of working- and middle-class Americans. With a military-industrial complex this big and this popular with the American people, the conservative argument that the nation’s problems can be solved by shrinking the federal government is delusional. Minimal government at home is an impossibility for a nation that maintains a global military empire.

Matthews’s article is especially useful in explaining just how extravagant defense spending has become. Efforts to find waste in the notoriously profligate Pentagon bureaucracy have been all but abandoned, despite the fact that one government study showed that at least $25 billion a year could easily be eliminated from the budget with no detrimental effect to military capability.

Interest on the national debt and the cost of entitlement programs are mandatory federal expenditures. Everything else is part of the discretionary budget, including funding for the federal judiciary, education, environmental regulation, agriculture, immigration enforcement, and so on. In other words, the discretionary budget covers everything one imagines a reasonably well-functioning government should be doing in a nation of 327 million people spread out across a continent. “The budget embodies the country’s core political choices: how much government its citizens want, what their priorities for it are, and how large a debt they choose to shoulder to pass on,” Matthews writes. “By this measure, defense spending looks anything but easily affordable. Nor, on its projected path of continuing growth, does it look sustainable.” As Matthews notes, almost 60 percent of the federal government’s discretionary budget is now spent on the military.

She also notes that much of this money is misspent, especially on “legacy” weapons systems. Tanks and aircraft carriers are good examples. The army has six thousand tanks, far more than it could conceivably need. Nor are tanks especially suited to the kind of asymmetrical and digital warfare that is likely to prevail in the future. The same is true for aircraft carriers, each of which costs $13 billion. Aircraft carriers, Matthews argues, are simply too vulnerable to today’s sophisticated, high-speed missiles. In many cases, the military doesn’t even want these weapons, but Congress’s pork-barrel spending makes it nearly impossible to redirect funding to the kind of technology needed to combat new threats.

Endless military adventures abroad, wasteful spending at home, unsustainable federal deficits, a misguided reliance on military solutions instead of diplomatic initiatives—all these factors have made the United States weaker, not stronger. Nor has spending on the military assuaged the public’s anxiety about future wars. If anything, all the loose talk of “invasion” on the southern border and the president’s casual threats to “obliterate” Iran or North Korea only fuel jingoistic paranoia. It is time, Matthews writes, to stop “equating spending on [the military] with patriotism.” One fears, however, that it may take a catastrophe greater than the 9/11 attack—and this nation’s fatally misguided response to it—to convince most Americans that that equation is false.