‘I Will Stand By You’ 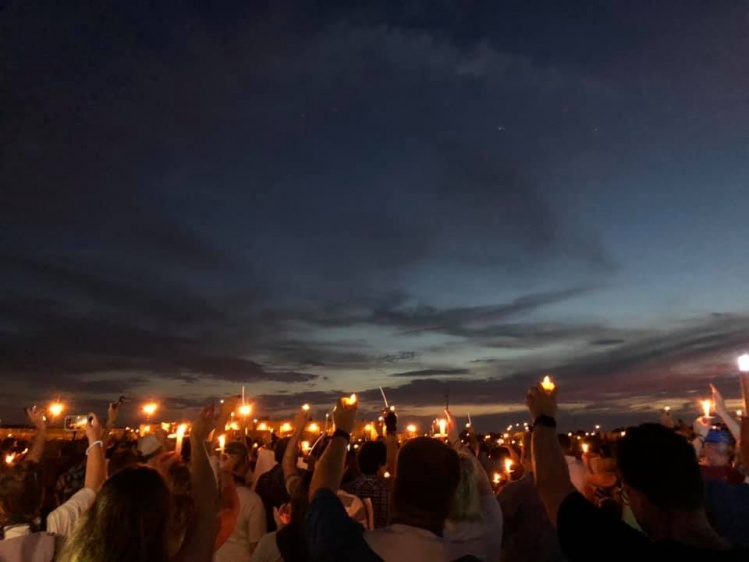 We came together in the middle of an overgrown baseball field, forming an unwieldy circle as the sun began to set. A diverse group: people of all hues and ages, a handful of children clutching balloons, young white women dressed in black but for the white of their clerical collars. My seminarians and I smiled at the familiar faces, exchanged greetings, chatted over the clang of boxcars rolling down the tracks alongside the weeded field. All around the country, similar gatherings were being held, all part of the July 12 Lights for Liberty demonstrations demanding an end to the mass detention of migrants.

Over a makeshift sound system came a song by the Peace Poets: “Oye, mi gente, traemos la fuerza,” we sang. “La libertad es la única bandera.” We chanted in English: “Rise up, my people, my condor, my eagle / No human being will ever be illegal.” Our singing grew louder as the sun sank in the sky. I could see lights beginning to brighten in the windows of the nondescript building on the other side of the fence. The T. Don Hutto Detention Center in Taylor, Texas, houses migrant women who’ve fled their countries, often on foot, and who are seeking asylum in the United States. The facility is run by Core Civic, a private prison company contracted by the United States government—thus funded in part by American taxpayers—that has come under scrutiny for a litany of abuses, including the mistreatment of inmates and failing to provide adequate healthcare.

I felt the movement of the Holy Spirit in my heart, reminding me that being comforted by our parents should not be a privilege.
sharetweet

Speeches began, and every speaker exhorted us to protest the conditions in places like Hutto where detainees are held. They urged the crowd to hold elected officials to account for the atrocities being committed—crimes that we as citizens tacitly approve by doing nothing to stop them. Ministers from Christian traditions—Episcopal priests, a Unitarian Universalist minister—called us to active solidarity with our neighbors, with humanity, with our brothers, sisters, and siblings in Christ.

After dark, the Unitarian minister invited us to place a hand on the shoulder of the person next to us and hold a moment of silence together. In the quiet, I heard a little girl, four or five years old, starting to get fussy. The child’s mother picked her up, held her close, and began to soothe her. I thought of the children who don’t have this comfort, separated from their parents—alone, afraid, wondering who might care for them. A hot breeze began to blow across the field, and the moment of silence ended. I felt the movement of the Holy Spirit in my heart, reminding me that being comforted by our parents should not be a privilege.

We had learned that a woman would be released from Hutto that night; she joined our protest and spoke about her journey to the United States and her experience inside the prison. Together, we celebrated her newly regained freedom. Lights lifted, candles flickering in the evening darkness, we sang the words of artist Melanie DeMore: “I will be your standing stone. I will stand by you.” Then, our public witness ended, and the circle began to break apart.

The simple refrain continues to play in my mind. In it, I hear God committing to accompany families fleeing violence, urging those with the privilege of citizenship papers to stand by asylees and all of our migrant kin: those who fear apprehension at the hands of ICE, those who suffer in detention, those children separated from their parents, those who continue to make their way north.

Jennifer Owens-Jofré is Assistant Professor and Director of the Latinx Studies Program at Seminary of the Southwest in Austin, TX.  She co-edited From the Pews in the Back: Young Women and Catholicism (Liturgical Press, 2009). A Latina Catholic theologian, she holds a PhD from the Graduate Theological Union.