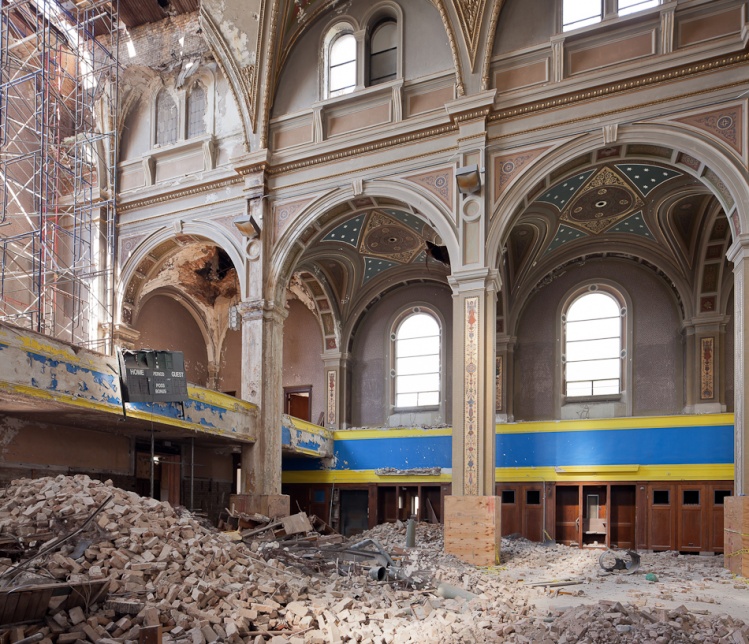 St. John of God Church in Chicago during its demolition in 2011 (Noah Vaughn/Flickr)

Seeing the name of one of my childhood bullies, Sandy, on the return address of the FedEx box surprised me. Why would she send me anything?

I was picked on constantly as a kid. By seventh grade I was ninety pounds and 5’10”. In 1972, thin was definitely not “in” at St. John of God Grammar School on Chicago’s working-class South Side. Add to that my mother’s Polish antidote for colds: no washing my hair in winter because I’d “catch a draft.” Every day I walked from 8 a.m. Mass to my homeroom accompanied by a steady stream of mean-girl name-calling: “greaseball,” “titless,” and the un-Christlike “palsy.” It became a contest to see who could trip me first. When I invited one bully over after school (because I secretly hoped my mom’s powdered-sugar waffles would make her like me), she ridiculed the four-room apartment my family and I lived in above my grandmother’s.

“You ain’t even got a shower,” she jeered the next morning. “Just an old Polack bathtub—with feet.”

That really hurt because my great-grandfather had built our two-flat after he arrived in Chicago from Poznań in 1908. Once when I was little, my mother saw me playing on my bedroom floor and said, “Dziadziuś put those boards in himself.” He died before I was born, but I could feel his spirit in the swirl of dust glimmering like diamonds in the light from the window. I felt safe there.

Whenever I felt raw from taunts, I pictured myself in a pew on a summer day, light beaming down from the stained-glass windows.
sharetweet

There was another place I felt safe: my parish church. St. John of God was Eastern-European ornate, with paintings of gently smiling angels and saints covering the walls. No kid ever made fun of me there; talking during Mass meant punishment by ever-vigilant nuns scanning for infractions. Whenever I felt raw from taunts, I pictured myself in a pew on a summer day, light beaming down from the stained-glass windows. During Mass I stared at the statue of St. John of God in his alcove on the main altar, and instead of praying for the souls in Purgatory, I asked him to make me famous, like my idol, Janis Joplin. She’d been bullied, too; her high-school classmates had scrawled “pig” on her locker. I had no talent, but I vowed that someday I would, like Janis, go to my class reunion and make my bullies feel like failures.

Life after grammar school was a reprieve—except there was Sandy. She brought the name-calling to high school, though thankfully it never caught on because her old gang had dispersed. Still, she’d sidle down the hall toward me, a lithe, smirking sylph, and look me up and down and laugh as I passed. By that point, revenge through fame—although for what, I still didn’t know—was my main motivation. It carried me through high school to college, where I traded the Janis fantasy for something even more unrealistic: becoming a poet. In 1988 I moved to New York to attend an MFA program. I wasn’t on a fast-track to literary stardom, but I was getting published, traveling internationally to give readings, making a living teaching writing. Didn’t the poet George Herbert say, “Living well is the best revenge”?

In 2011, I got a friend request on Facebook from a former neighbor in Chicago, who told me St. John of God Church was being demolished. I was horrified and deeply grieved. Through many moves I’d carried artifacts of my sanctuary with me: a box of incense for the Feast of Epiphany, a small envelope of rose petals that had been touched to a Virgin Mary statue that supposedly cried real tears. There was a parish Facebook group where people were discussing old times. I knew my former bullies would be there, but I joined anyway, for one last look.

There my old tormentors were, including Sandy. No longer a snickering pixie, she looked hesitant, diminished, as if life had whittled her down. She had posted photos she took of the half-bulldozed church: a mural of the Holy Family with nothing but blue sky behind it, and the main altar, divested of everything, towering above a rubble-strewn floor. The St. John statue was gone. Great-grandpa had done carpentry work for the church, but nothing he’d built remained. From Sandy’s comments on the photos, I could tell she was grief-stricken. I’d thought I was the only one who loved that place. I was wrong.

After I posted a greeting in the group, friend requests and messages appeared:

“Sharon, I remember when your Nicholas Copernicus poem won an award in that Polish contest.”

“Are you still writing? You were so talented.”

Did none of them recall what they did? In spite of myself, I felt nostalgic.

A month later, someone organized a reunion. There was no Pulitzer in my future, but maybe I could flaunt my travels. Most of those women had never left Chicago. I decided to go.

As I walked into the bar area of the restaurant, Sandy and three former mean girls rushed toward me. I readied myself to say something eloquently sarcastic. Then one of them, Linda, thrust my first poetry collection at me.
“I ordered this off Amazon,” she said. “Will you sign it? You know, I visited the East Coast once.”

I waited for a pause in Linda’s breathless story about her trip to New York to begin my fierce narrative, but then she interrupted herself: “Hey, remember the ‘Living Rosary’?”

I did, vividly. Every year, on an evening during the first week of May, the entire grammar school walked in procession from the schoolyard to the church, led by priests carrying a statue of the Virgin Mary adorned with roses. The entire neighborhood thronged the streets, singing, taking pictures. Inside the church, we kids lined up one behind another in the aisles as an eighth-grade girl in a white dress lit the candles we were holding. As each flared, the congregation said a “Hail Mary.”

“And when all the candles were lit,” Linda said, “they’d turn off the lights, and—”

“And we were the Living Rosary,” I laughed.

I was right there with her as she described looking through tears at the rubble and half-smashed murals, remembering pews filled with squirming children and the altar decorated for Christmas.
sharetweet

As I joined in the memory-sharing (and wondered whether I had Stockholm Syndrome), it occurred to me that we really were a living rosary. We’d shared countless childhood hours in that church, that school. And hadn’t the nuns told us that even though Jesus was murdered by his bullies, he forgave them? In Matthew, when Jesus teaches the crowd the Lord’s Prayer during the Sermon on the Mount, he goes on to highlight one single aspect of the prayer: “If you forgive those who have stumbled and gone astray, then your heavenly father will forgive you.”

My long-held hurt suddenly became an array of conflicting emotions. I had no idea what these women’s lives were like now—or then. They probably had their own tormentors; bullies have often been bullied. But I created a good life for myself. I’d gotten my “revenge.”

After the reunion, I sent Sandy a Facebook message to ask if I could call her; I wanted to know how it felt to visit our deconstructed church. She said yes. I was right there with her as she described looking through tears at the rubble and half-smashed murals, remembering pews filled with squirming children and the altar decorated for Christmas. When she told me she’d pilfered a cement brick and an old missalette covered in plaster dust, I laughed—I would’ve done that. We texted each other photos of our dresser-top altars, which looked very similar, right down to the box of incense for Epiphany and the envelope of petals touched to the crying Virgin Mary statue. We hung up promising to stay in closer touch.

Still, I had no idea why an old, beautifully carved wooden cupboard door slid out of that FedEx box she’d sent. It had a sweet, musty scent I couldn’t place.

“Our classmate Don,” her note said, “gave me this because he was moving, but I already salvaged one. Didn’t you say a relative built stuff for the church? It’s a cupboard door from the priests’ sacristy. You can still smell the incense!”

Standing in my Brooklyn kitchen, holding an object that was, like myself, far removed from its source in time and place, I understood that this was Sandy’s apology: a door to past and future. It was important that I forgive her and all my former torturers because they were repositories of my childhood, living rosaries of shared, idiosyncratic memories. And didn’t the rosary include the sorrowful mysteries as well as the joyful and glorious? Our Catholic upbringing taught us there was a divinely ordained place for suffering. It was the language Jesus used to communicate his humanity. If we could learn to understand it, it had value.

I couldn’t be certain if that cupboard door was the work of my great-grandfather, but I was sure Sandy had given back to me something I thought I’d lost.

Published in the May 2022 issue:
View Contents
Tags
The Last Word